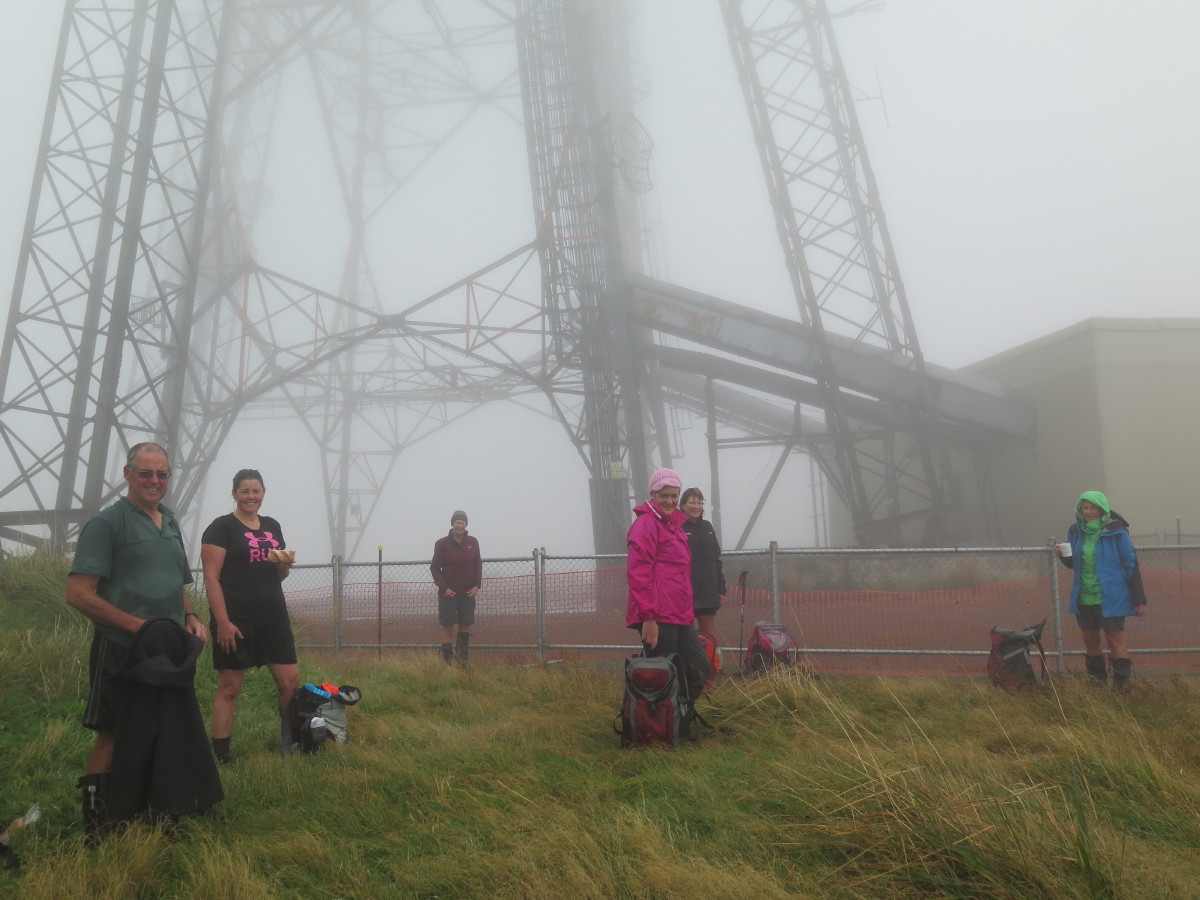 The weather for the Southern Ruahine Range and the Woodville area was looking not too bad. The forecast the night before predicted light cloud and a few showers later in the day.

Nine of us headed down Highway 50, eagerly keeping our eyes on the Ruahine Range. It was not looking promising. The entire range, as far as the eye could see, was shrouded in thick cloud and looked gloomy, but we were intrepid adventurers and this was not going to ruin our day.

After a quick comfort stop in Dannevirke, we carried on, with drizzle starting before we had reached Coppermine Creek car park where we would start our tramp to Wharite Peak.

It was time to don the raincoats. For much of our climb, it would be coats on, coats off, coats on again; it was a very annoying and penetrating drizzle, with a cold breeze. 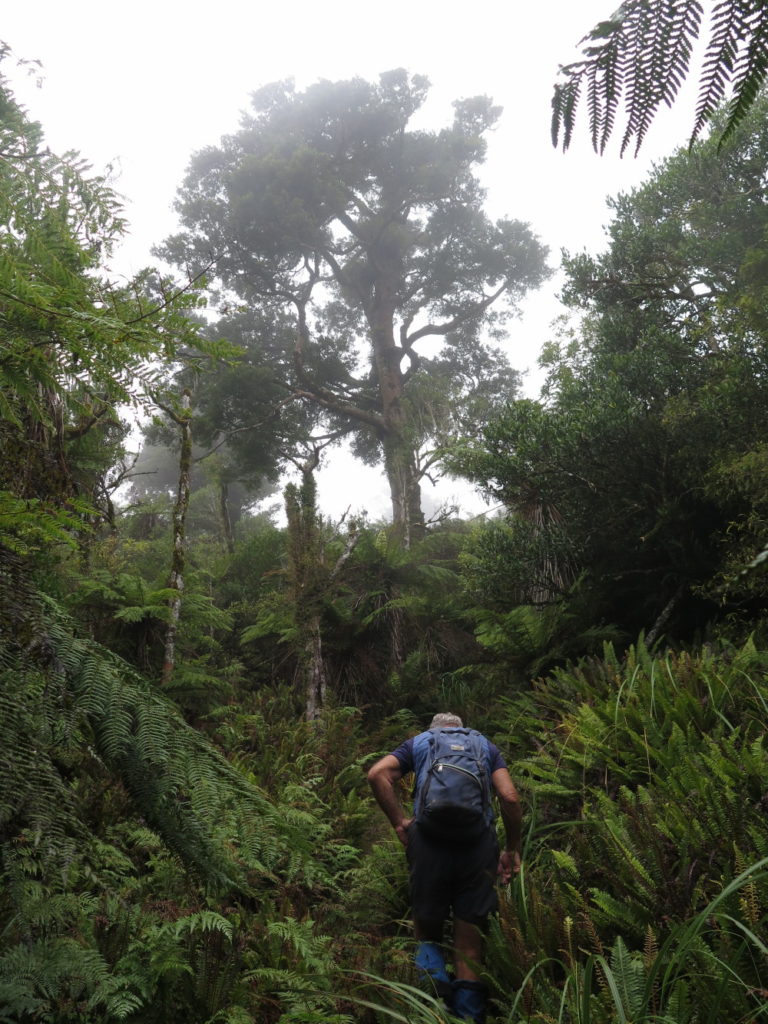 We started along the Coppermine Creek track at 9.45. The track looked almost like a Great Walk route – wide, easy and carpeted with leaves. This was too good to be true. We had a false sense of security. After about a 20-minute walk, we reached the turn-off to Wharite. The track heads straight up, and this is when the steep slipping and sliding started on a very boggy track.

The track is overgrown in many places, not very well maintained and the orange markers were few and far between. Any hope of views out East or West vanished. Thick low cloud remained with us the entire way.

Ted tramped with us until the track became too slippery, then he decided to return to the van. Wise man!

Even though views were denied, we were determined to make it to the top. After all, we were here so we had nothing to lose. Let’s just get it done. The slipping, sliding, tripping and mud became exhausting after a while. We still had no idea where the transmitter tower was; all we could see was thick cloud. Reaching the top of our first peak, we thought: Surely we had to be near the top now? How wrong we were. There was another peak to climb, so the slipping and sliding started again. Eventually we made it to a dilapidated ‘Wharite’ sign, pointing us in the right direction. We still couldn’t see the tower.

Finally, after a three-hour struggle, we rounded a corner – and there it was, this gigantic monstrosity looming out of the fog like some ghostly metallic figure. The cloud was so thick we could barely see the bottom section of the tower. 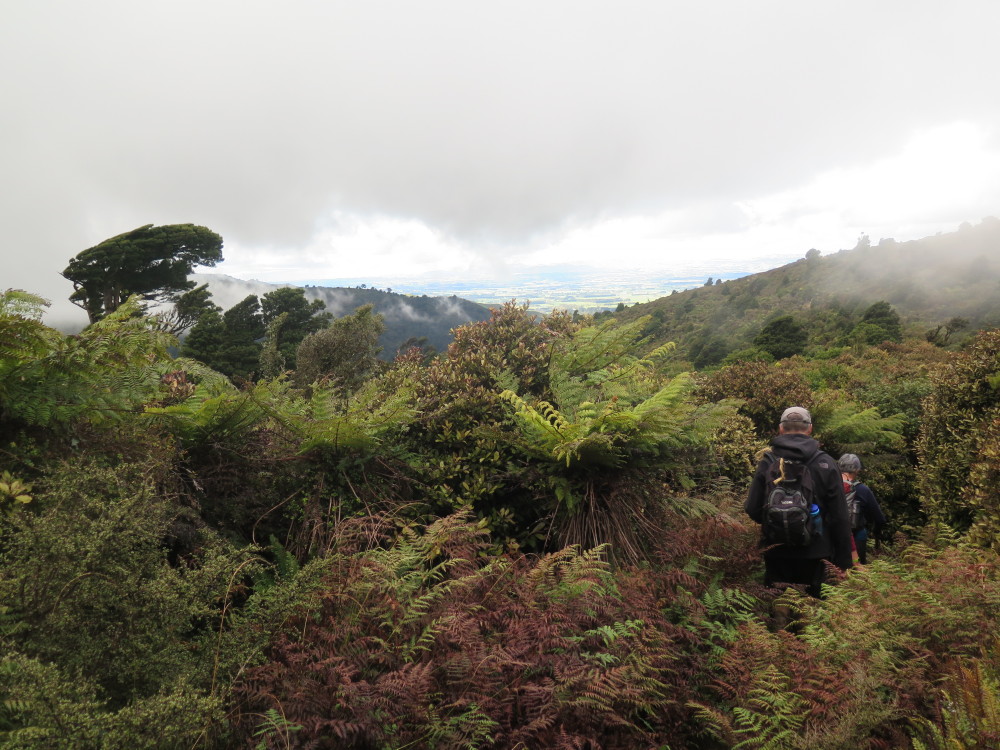 Views over the Manawatu Plain

It was bitterly cold on the top, so we had a 15-minute stand-up lunch before heading down and starting the whole slipping, sliding and tripping performance again, often sliding down on our backsides just for sheer safety reasons – oh dear.

By the time we arrived back at the van, muddied and bruised, it was 3.30. After a much-needed wash in the Coppermine stream, and a change, we climbed into the safety of the van and headed home.

Even though the track was muddy, slippery and unpleasant at times, it was a tramp I am pleased I did not miss and it was a great group to be with. Miraculously, there were no broken bones. Next time, we will try to choose better weather.

A big thank you to Alison for being our driver.

A year in the life of a GuideOn June 3, Graham Leech gave a presentation at the club meeting … END_OF_DOCUMENT_TOKEN_TO_BE_REPLACED

A year in the life of a GuideOn June 3, Graham Leech gave a presentation at the club meeting … END_OF_DOCUMENT_TOKEN_TO_BE_REPLACED