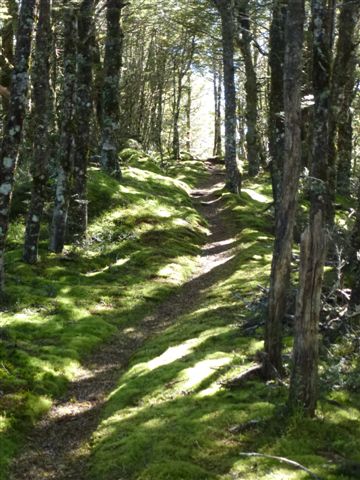 Again, it was a really great day to get above the bushline. We had a clear blue sky and barely any wind. It was cool in the shade, but you can’t have everything, and the first hour or so is steadily uphill so we were soon warmed up. 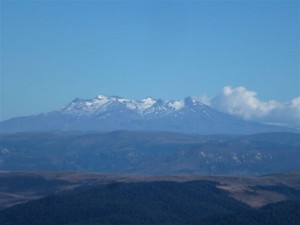 Eleven of us set off from the Lakes car park with various intentions, Kiwi Saddle Hut being the goal for most. The route in from the Taihape Road was via Castle Rock Rd which would appear to be the permanent route now judging by the signage.

The climb up Kuripapango starts through pines but is mainly through beech forest, with enough clearings to give good panoramas back out east and north to the end of the Kaweka Range. Pines have really established themselves at the top of Kuripapango and overgrown the route to the signal mast. 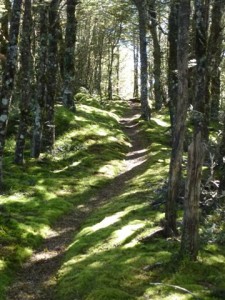 The undulating Smith Russell Track was a welcome respite after the steady uphill and despite the drought was as picturesque as always with moss along the track through mature mountain beech. From this track, you get great views west across to Ruapehu and Ngauruhoe.

The hut is reached after a steep descent and hence some chose to have lunch while still enjoying the extended panorama and avoid the subsequent climb back up on the way home.

All were back at the van by 3.30pm so there was time to share our thoughts over a coffee before heading home about 4pm.

Contents: NTC AGM is on Thursday May 5th. There will be supper after the meeting. Club Meeting … END_OF_DOCUMENT_TOKEN_TO_BE_REPLACED

Contents: NTC AGM is on Thursday May 5th. There will be supper after the meeting. Club Meeting … END_OF_DOCUMENT_TOKEN_TO_BE_REPLACED