Getting away from Napier on Thursday evening prior to Easter was stressful. None more so than for organiser John (Taz Devil) Dobbs, who had only just returned from leading a tour party in the wilds of Tasmania. We left from John’s place at around 6.15 and headed off to Waipukurau in his vehicle with others following in Murray’s Suzuki. After a quick Asian meal in Waipukurau, we set off on the more serious section.

We travelled through the Manawatu Gorge and took the Shannon-Levin back route. All was well until what was supposed to be the turn-off to Levin. John was leading and Murray must have been on autopilot. It wasn’t until we had been travelling for some time that Denise, who was in Murray’s vehicle, said the road did not look right. We were encountering a series of 25k corners. Efforts to attract John’s attention by flashing lights and beeping the horn were unsuccessful, so Murray turned around and went back to the junction. Denise used her mobile to contact Sue Marshall in John’s car to tell them what had gone wrong and where we were. Fortunately, John and Co had also woken up and soon joined us. We had been on our way to the Wairarapa via the Pahiatua Track…

So we set off southwards, bypassing Levin. A weary crew finally entered the Paekakariki camp grounds, to be confronted by a code-controlled barrier. It was after 11pm. Murray finally decided to risk the owners’ wrath by banging on their door. The reception was frosty to put it mildly. Finally we reached our accommodation, which was basic but adequate.

Next morning was fine with little wind. The team gathered after breakfast and discussed options. For Good Friday, they followed Murray’s recommendation of a trip into the Tararuas – via the “Puffer” track at Kaitoke and down to the Tauherenikau River and the Smith’s Creek Shelter. However, mine hosts at the motor camp had demanded we front up at 8.30, so our departure was delayed while John grovelled about our unseemly arrival the previous night. He must have done a convincing job, as he arrived back with limbs intact.

North of Upper Hutt, we reached the turn-off by the old YMCA buildings at Kaitoke and halted in the car park. It was more than 20 years since Murray had last entered via this road-end, with Sue Marshall the only other who had also been there. A steady climb via a 4WD track led to the track proper through a hillside covered in gorse and kanuka. 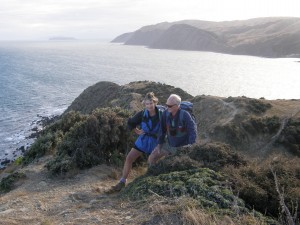 From there, it was downhill through a track scoured out of clay, which Jude’s friend Sue Dawson found somewhat daunting. The rewards were the magnificent miro, kahikatia, totara and broadleaf trees which flourish in this area. John showed his affection by hugging them. Surprisingly, there were not a huge number of other trampers, although we did meet some unsuccessful hunters on their way out.

At around three-quarters of the way to Smith’s Creek Shelter, we came across a DoC sign advising a diversion to avoid a slip. The three blokes decided to risk going via the original track, while Denise and Sue Marshall chose the alternative route. Jude and Sue Dawson were still to reach that point. The blokes found the slip and debris challenging but do-able, and pushed onto the shelter for lunch nearby, before back-tracking until they found the rest of the party down by the creek in a nice sunny spot. The climb back up proved hot, and a challenge for Murray, who had not been out in the bush for four and a half months. However, we all made it and returned via the northern circuit of the Pauahatanui Inlet, which proved popular with John and Paul, who were impressed by the sea and shore birds.

Back at camp, we had our nibbles and meals before setting off to explore the beach, just on dusk. It was a lovely evening with an apricot band of sky near the horizon, capped by a largely clear blue sky and Kapiti Island in relief. It was around the time of the full moon, which probably accounts for the lunatic behaviour that followed. The team walked; held hands and ran; played ring-a-ring-a-rosie; draped themselves artistically off some creative person’s driftwood sculptures and unashamedly posed for photos.

Then home to bed before the Mental Health Unit arrived.

Next day, we were again blessed with a fine morning, but with a wind that increased as we came closer to our next destination at Makara. Jude’s local knowledge led us to decamp from the comfort of our cars into what was, by now, near gale-force winds. Sue Marshall was feeling below-par and wisely decided to stay in John’s vehicle while the rest of us set off around the coast, passing evidence of old slipways, winches and disused boat sheds. 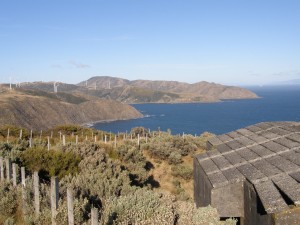 We climbed up a grassy gully and then followed close to the cliff top. The slope steepened before the final high point leading to our objective. There were the World War 2 gun emplacements, positioned to cover Cook Strait – two at one level, each the size of a seaside bach, with a third mounted on a knoll above. They were protected by a number of machine-gun emplacements. The views across Cook Strait were clear and impressive. We could see the ferries as they prepared to enter the Sounds. After a time, it was around the corner and onto a flat area behind the gun emplacements where we found the remains of foundations, which presumably were for barracks and maintenance sheds. The background was the Makara wind farm, which proved quite mesmerising. As we followed the recommended route down the 4WD track to Opua Bay, we passed what appeared to be two ammunition lockers.

On reaching the beach, we made our way back in high winds, observing the various manmade rubbish that littered the beach. There was only one slightly challenging area to negotiate, where gravel gave way to rocky shore, so we had to boulder hop for a time. The consensus was that the beach walk was generally boring. However, Paul did manage to spot a coastal version of our old enemy, Spaniard!

Back at the cars, we decided to visit a nearby cafe that offered surprisingly good food and coffee. Then it was off to Wilton’s bush, a popular stopping place where we saw groups of all ages enjoying the surroundings, which the original farmer had the foresight to preserve and which has been added to with additional plantings and a variety of tracks for all levels of fitness. While some of the plantings were not native to the area, the variety of specimens pleased the botanists among us. After taking a steep track upwards, Murray decided to return to the cars, as he had developed a blister. Some time later, the rest returned and we made our way back to camp. Later, Drs Payne (or should that be Pain?) and Marshall operated on Murray’s blister. He was ordered to sit; the needle and thread was prepared with white meths and Denise was told by Sue M to “Push harder!” which left Murray somewhat fearful. However, the exercise was largely painless. That evening we dined at the local pub, which has been upgraded, and most found at least something acceptable to eat. Murray struggled to get his plastic fantastics around the chilli squid and, after having complained, was given a free meal.

On Sunday, we drove into Wellington, where the crew disembarked at Oriental Parade before their walk through the green belts to Houghton Bay. Murray gave this trip a miss, as he had arranged to meet up with his 87-year-old aunt. The rest headed up to Mt Victoria and on behind the zoo. The memorial to Sir Truby King led to a discussion about his role; the team agreed that the curtailing of services he initiated was a loss to NZ families. Many high points provided excellent views of Wellington’s suburbs and harbour, but the sky was leaden and threatening rain. Murray and the team had agreed to meet at Houghton Bay-Island Bay around 12.30pm. Murray was driving around Island Bay half an hour early when he spotted some of the team on the footpath. The weather had finally begun to rain gently, so timing was spot on. The rest were scattered elsewhere and rounding them up was like trying to herd feral cats. A number had differing views about what was to happen next, despite “The Plan”. Result: Five were in Murray’s car and two went to Courtenay Place by bus, before we all met up at Te Papa for lunch and the outstanding Pompeii exhibition.

Back to camp and into the showers (limited to 4 mins per person before the hot was turned off). Then off to Fisherman’s Table where we had a pleasant meal in a crowded restaurant before heading back to camp and bed. That night, a gale screamed through the trees and vegetation. Next morning, there was evidence of the damage, with shredded leaves and branches. Evidently some of those in tents had them blown away.

We got away early, having decided to return to Napier via the Rimutakas-Wairarapa. On the way home, we broke our journey at the Mt Bruce Wildlife Centre and enjoyed lunch plus a stroll. Particularly entertaining was the hand-reared kokako who had learnt to wolf-whistle. The large eels also were a point of interest.

Thanks to John Dobbs for his organisation and Pat and John Tristram of HVTC for collecting trip info. While we may not have used much of that this time, it will provide a useful resource for future trips.