Eleven travelled by van down State Highway 50 towards Dannevirke. The weather was fine, although we saw some distant cloud hanging around the tops of the Ruahines, which we were confident would burn off. 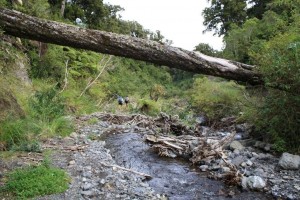 Driver Ken Ross had been given his navigating briefing for the drive to the road end by the club captain and in a remarkable feat, had memorised the route perfectly, turning off just past the pub on the northern approaches to Dannevirke. From there, it was up the Umutaoroa Road before turning into Tamaki West Road until we reached the starting point.

The three Havelock North members were already there and were ready to depart. Three of our more seasoned veterans elected to do their own versions of the trip, with Vic nominating the A-frame as his destination, while Ron Morison and John Marshall decided to travel up the West Tamaki River to Stanfield Hut.

The remainder set off through the gate, down the four-wheel drive track through the bush to the clearing and its picnic shelters, and then down to the river. There was a moment of confusion as we initially started upstream searching for the track to take us up the ridge. A clump of willow in the middle of the stream obscured our view of the track. The party backtracked and began the ascent through the regenerating bush and scrub up to the ridge proper.

Looking across to the ridge to our west, it was clear that the area had been milled over, as larger trees were only now establishing themselves among the scrub. Finally, the four-wheel drive road ended and we came across a DoC vehicle before continuing on through a well-maintained but slippery track. 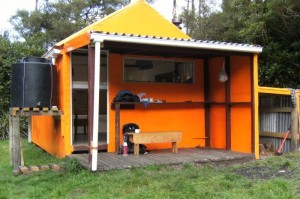 We had spotted Vic making his way up the West Tamaki River below, but had been unable to attract his attention. By now, the party had split into two distinct groups, with the speedsters pushing ahead while the plodders continued at a more leisurely pace. We dropped down the ridge to the river and after a few minutes made our way to Stanfield Hut, having heard a volley of shots from on high and then encountering two DoC workers doing track maintenance and sign replacement.

At that point, we had a sit down, chat and refreshments. Peter Uren, in a cunning ploy, had left his lunch behind and was almost buried in an avalanche of donations from other members. He probably had the most interesting selection of food of anyone. Others saw the advantages and suggested they might leave their lunches behind next time as well! 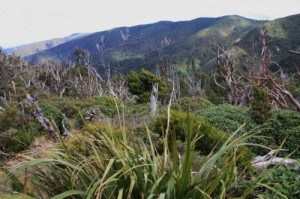 From there, it was up-river, where we met John Marshall, who was returning downstream having made good progress. Next it was back into the bush and then there was a significant climb up on to the ridge through relatively open beech forest. The ridge was by no means a doddle; there were a number of saddles where we lost height and then had to climb back up again.

By 12.30pm, we had reached the drop-off point to Cattle Creek Hut, which we sighted from the ridge. The hut sits on the true right bank of a stream and the fit and fast had already got there when we stopped on the ridge for lunch. The rest elected not to go down to the hut. After a leisurely lunch and lie-down in the sunshine, we waited until the others rejoined us before back-tracking along the ridge and returning to Stanfield Hut.

At that point, there was a debate about the easiest way back to the car park. Some advocated returning via the ridge, while others elected to return via the river. While the river route made a round trip of it, it was not without some difficulties because of introduced plants and willows, which made travel on the flats a challenge, or impeded progress completely. The river level was exceptionally low, given our dry summer and autumn, and there was a huge amount of shale and rock in the stream bed.

By a remarkable feat of co-ordination, the ridge party and the river party met at the point where the track to the car park left the river. From there, it was the usual change of clothing and off home after another good day out.

Sparrowhawk bivvy, Ruahine Forest Park, Saturday 6 August 2022 Banner Photo: The view east, towards the Wakararas and beyond On a beautiful … END_OF_DOCUMENT_TOKEN_TO_BE_REPLACED

Prologue: The author was on the Whirinaki tramp, reported on this website under the headline 'We observe a mock turtle and the rodent of Upper Te … END_OF_DOCUMENT_TOKEN_TO_BE_REPLACED

Ruahine User Group A meeting was held on Monday 25 July, in the NZDA rooms in Dannevirke.  Julia … END_OF_DOCUMENT_TOKEN_TO_BE_REPLACED

Ruahine User Group A meeting was held on Monday 25 July, in the NZDA rooms in Dannevirke.  Julia … END_OF_DOCUMENT_TOKEN_TO_BE_REPLACED

Ruahine User Group A meeting was held on Monday 25 July, in the NZDA rooms in Dannevirke.  Julia … END_OF_DOCUMENT_TOKEN_TO_BE_REPLACED

Ruahine User Group A meeting was held on Monday 25 July, in the NZDA rooms in Dannevirke.  Julia … END_OF_DOCUMENT_TOKEN_TO_BE_REPLACED