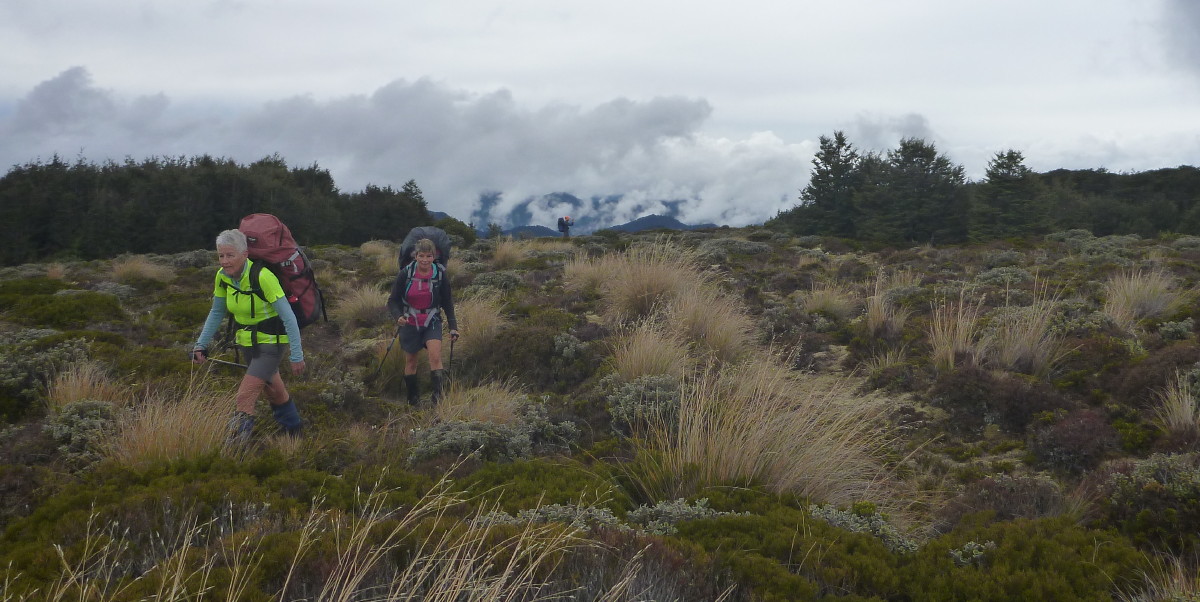 We were all aware that the hunting season is at its peak, so Team Fluoro was born. Geoff had his orange beanie, Juliet her bright pink top, Alison her fluoro biking top, and Julia had a fluoro vest tied onto her backpack. We intended to be seen for miles.

Plan A was aborted after we were not granted permission to cross through private land from Kiko Road to Cascade Hut, via Ngapuketerua; too many hunters in the area.

Plan B – our attempt to go to Rocks Ahead Hut, via Kaweka J, Back Ridge – was also aborted due to high winds heading up Trial Spur. We did not even reach Dominie Bivvy.

Thus Plan C was concocted. Drive around to the Pinks/Middle Hill car park on Makahu Road, and then walk up to the Makino Ridge track start. Head up the ridge and then onto Makino Hut, and down to the Makino River on the Mangatarutu track to camp overnight. On Day 2, head up to Mangatarutu Hut and then onto Tira Lodge for another night. Day 3, walk out via Whetu and Camp Spur to Middle Hill Hut, and then out to the car park. Good thinking, Geoff.

So we started at around 11am, heading up Makino Spur. The day was fine and sunny with high cloud and not too hot – just right for tramping. Meeting some Danish hunters/trampers on the ridge, we shared thoughts on the steep hills in New Zealand and hunting Sika deer in the roar season. 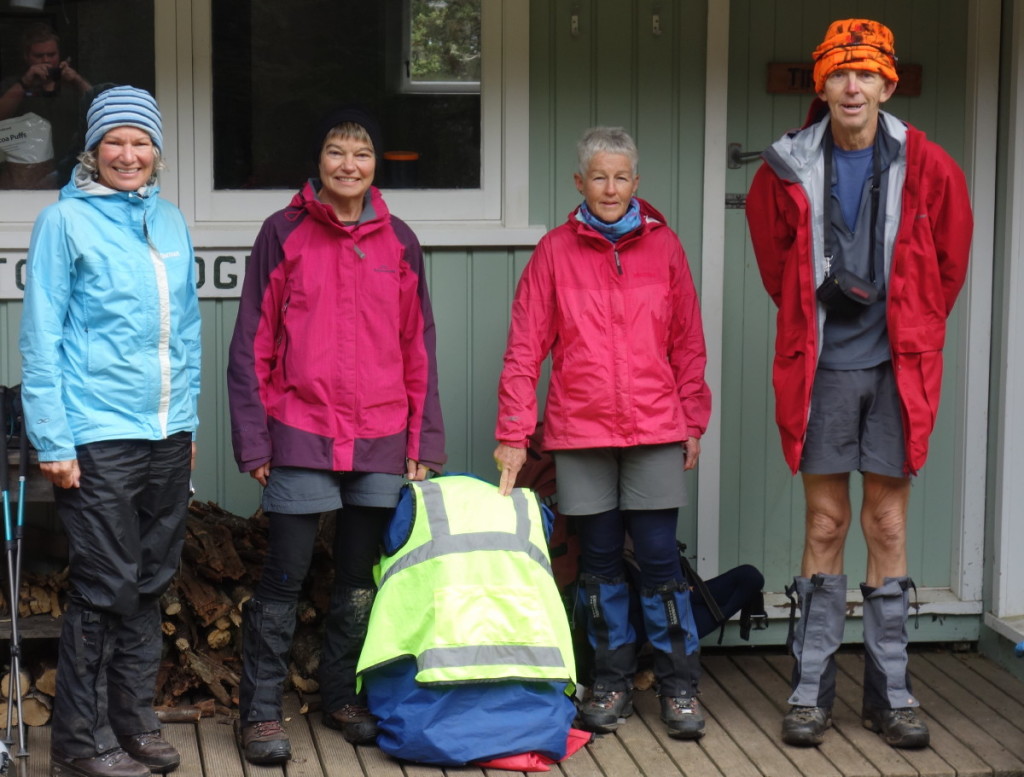 After a brief stop at Makino Hut, we headed for the river. The track heads along the ridge-line to Whetu and Ballard Hut, but the turn-off to Mangatarutu and Makino River is reached in 45 minutes. The drop-off is steep, and we could hear deer calls (made by hunters). They were on the Ballard Hut track, and it did feel a bit too close for us. We scooted along, and soon passed through a lovely rimu tree stand. On reaching the river, we headed downstream along the Te Puia track. There is a grassy area, which is a great camp spot, and a chopper pad. The night was gusty at times, and we heard deer calls again (the real ones).

The next day, with fresh legs, we headed back to the junction and onto the three-wire swingbridge. This bridge was built by Charlie Janes, and he says he was famous for one week after it was completed. It was Juliet’s first time on a three-wire, and she managed well.

The DoC sign for Mangatarutu indicated 3hrs to the hut. It took Les and I exactly that in November, after starting the day from the Makino car park. But with cooler temperatures and fresh legs, it took me only 2hrs 15mins. A chopper flew overhead; no doubt it was more hunters. 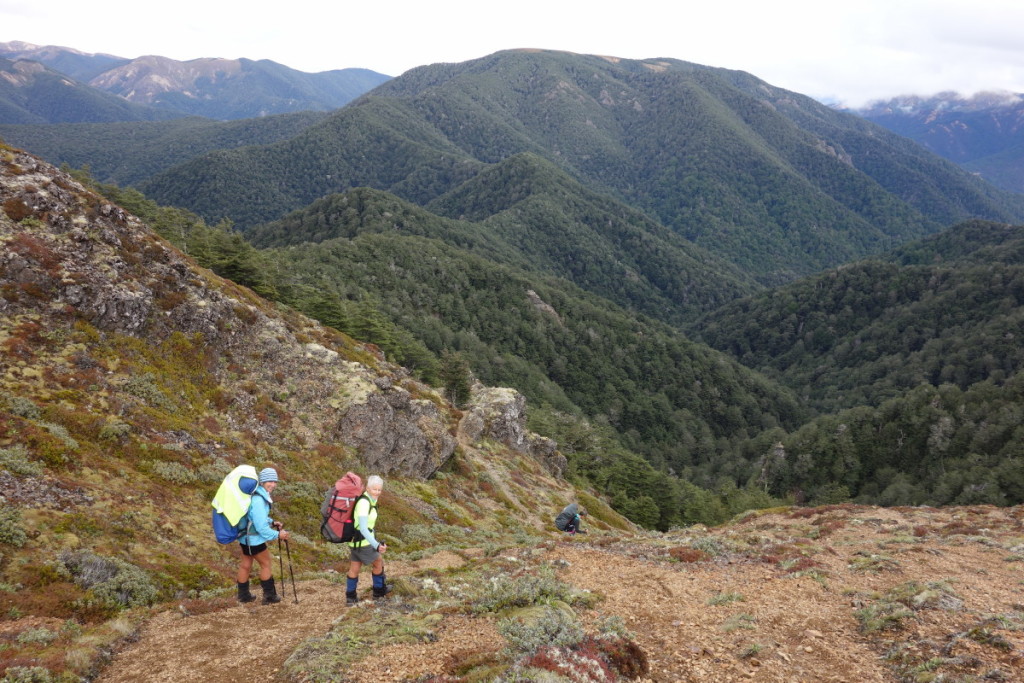 We lunched at Mangatarutu Hut and then, after checking out the view from the helipad, made our way to the open tussock junction for Te Puke and Tira. We had clear views to the Kaweka main range, but a bank of cloud in the west. The ridge track to Tira Lodge could be seen along with the open tussock areas of Venison Tops.

On arrival at the hut, the fire was already lit. Three hunters and a young son had just been flown in that morning by EKH. This was a R&R week with a bit of hunting. We told them of the hunters we had met on the Makino Ridge track who were heading out after a week of hunting. Their tally had been five stags. That gave them something to mull over.

We chatted, and discovered that one of the hunters was a follower of our trip reports on the website. The Mt Meany Marathon story had captured his attention.

A bed in the separate bunk room was welcome.

On Anzac day Monday, we headed home. The hut book had warned of a wasp nest on the Ballard track, but none of us saw it. The track again follows ridgelines, before it emerges from the bush. The wind had dropped and the day was gloriously sunny. We headed up past the Ballard Hut turn-off, and then on to Whetu. A final break to soak up the views to west and north, of Ngaruhoe, Tauhara, Pirongia, Tarawera and even Edgcumbe. To the east, we could see the coastline, farmland and the Kaweka range track around to Kaweka North. 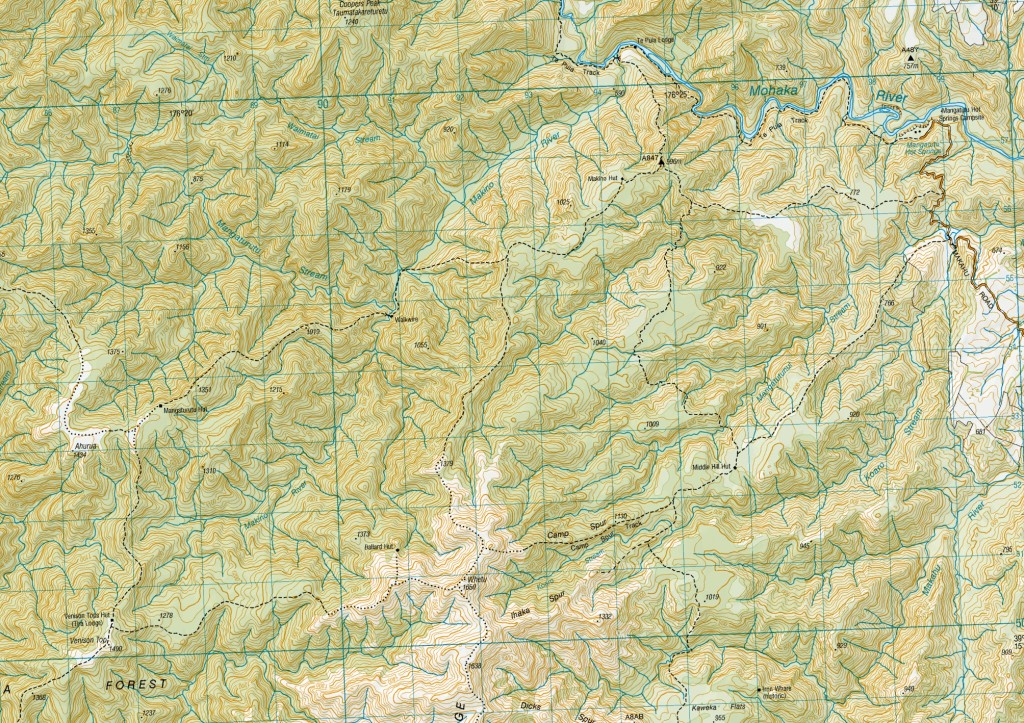 Lunch was eaten just above the bushline on Camp Spur. A hollow, out of the wind and in the sun, was the chosen spot. The downhill to Middle Hill Hut, and then the race was on. Geoff was spurred by comments about those trampers who see the end and increase their speed. Not to be outdone, I tried to keep him in sight. We made it to the bridge in 1hr 12 mins. The feet were on fire again.

We all made it back to the vehicle in just under 1hr 30mins.

A great tramping circuit, with the only damage being one wasp sting to Julia, and three to Geoff. We did notice that wasp nests are increasing in the Kaweka FP. Research into the control of wasps is urgent.

Aranga Hut On Saturday 14 January the tramp was changed to a loop in the Northern Ruahine Range. … END_OF_DOCUMENT_TOKEN_TO_BE_REPLACED

Aranga Hut On Saturday 14 January the tramp was changed to a loop in the Northern Ruahine Range. … END_OF_DOCUMENT_TOKEN_TO_BE_REPLACED