From the top of the Mangaharuru Range (Bell Rock or Taraponui), you can look north-west into the Mohaka River basin, onto some very interesting country: a vista of farm, forest and bush with distinctive land formations and the dramatic Mohaka River rushing through it. In the middle, at the end of Waitara Road, is Landcorp’s Waitere Station, the location for our tramp. We’re grateful to have permission to tramp on this farm. 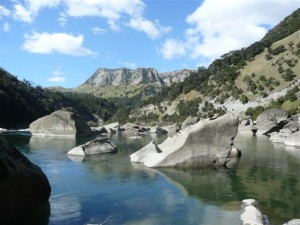 Our route was a clockwise circuit, starting from the station’s new cattle yards. We followed farm tracks westward, until dropping quite steeply to a river terrace and our first expansive views up the river.

Our search for an easy descent to water level didn’t prove successful and so the technically difficult, ungainly and undignified five-point crawl was generally adopted for the final drop. We took an extended drink stop in this interesting section of the river, on large flat rock platforms featuring ancient shell fossils. A waterfall spouted from the cliff face opposite. 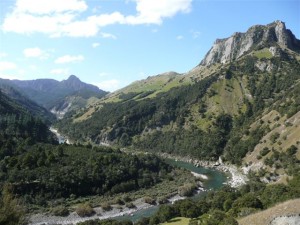 We worked our way downstream, clambering over and around large boulders along the river’s edge to our lunch spot, a deep swimming hole – but there were no swimmers. And then we climbed steadily, to be rewarded with expansive views up-river to that distinctive peak, Te Kooti’s Lookout, and to our route ahead, a hanging valley between towering buttressed limestone cliffs. The climb through the valley is dramatic, with amazing rock formations on both sides. From the top of the valley, it was a short traverse around to the airstrip and then downhill back to the woolshed, where we found our wheels.

The weather had been near-perfect: Sunny with a clear blue sky, plus a few fluffy white clouds to add interest to the photos – and just enough wind to keep everyone cool.

Aranga Hut On Saturday 14 January the tramp was changed to a loop in the Northern Ruahine Range. … END_OF_DOCUMENT_TOKEN_TO_BE_REPLACED

Aranga Hut On Saturday 14 January the tramp was changed to a loop in the Northern Ruahine Range. … END_OF_DOCUMENT_TOKEN_TO_BE_REPLACED