Saturday April 10 was a glorious autumn day of blue skies, sunshine and no wind. We drove through Kereru and down the pretty Mangleton Valley road, stopping at the gate that leads to the Masters Shelter car park. It was to be a day of teams, the A+ team deciding to tackle the longer Golden Crown route to Aranga Hut and beyond to high point 1406. 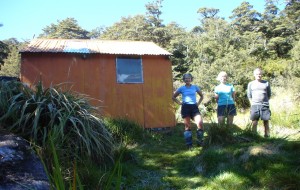 The van continued on, stopping at Sentry Box car park, this group choosing the steeper but shorter route. The first steep section sorted out the A and B teams with everyone stopping at the Rocky Knoll for a breather and a look round. The A and B teams regrouped again at the sign post of the track junction, where the B team announced they would not be going to Aranga Hut but stay on the tops for lunch, then make their way along to the Golden Crown ridge.

The A team set off, stopping at the high point Pohatuhaha (1368m) where a 360deg view awaited. Mt Ruapehu stood out, as did all the high points on the Ruahine Range, Kylie Bivvy, the Heretaunga Plains and Wakarara range. Photos were taken, routes were established then it was back down to the main track and along the sometimes muddy undulating ridge, reaching the turn off at 11.15am. 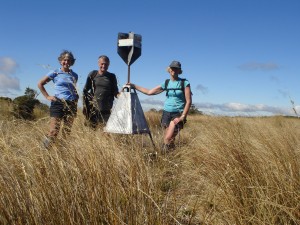 Meanwhile the A+ team had scampered up Golden Crown past the sign post and hurried on towards Aranga Hut, leaving a note in the hut for the A team saying they had left for 1406 at 11.30am. They made their way the short distance to the objective for the day and were rewarded for their efforts with fabulous views over the Ruahine Range and west towards Mt Ruapehu. The A team reached Aranga Hut and had settled into a relaxing lunch in the sunshine when the A+ team arrived back, and they too sat in the sunshine and had lunch.

Meanwhile the B team had found a spot about 10 minutes on from the signpost for their lunch stop. They then continued on along the ridge top and down the Golden Crown ridge. It was along here that a wasp nest was encountered and unfortunately one member was stung a few times, which did not make a good end to her day.

Meanwhile the A+ and A teams made their way back across the wet plateau to the track junction with the A+ team heading south towards Sentry Box track and the A team continuing north towards Golden Crown. The A+ team also made the diversion to Pohatuhaha, checking points on the map and taking photos. Then it was a quick trip down to the car park, to pick up the van and drive back to Masters Shelter, where A and B teams waited. A great day out for all teams, with everyone achieving what they had set out to do.

Mackintosh Hut/Rogue Ridge, Kaweka FP, Saturday 17 September 2022 Banner Photo: The leaning sign at the top of Mackintosh Spur It was a sunny, … END_OF_DOCUMENT_TOKEN_TO_BE_REPLACED

Shine Falls, Local, Wednesday 7 September 2022 Banner Photo: Group selfie and the falls Nine of us set off on a very frosty morning from Park … END_OF_DOCUMENT_TOKEN_TO_BE_REPLACED

A-Frame to Stanfield Hut, Ruahine FP, Saturday 3 September 2022 Banner Photo: At the A-Frame Hut We had a full vanload booked to do this trip. … END_OF_DOCUMENT_TOKEN_TO_BE_REPLACED