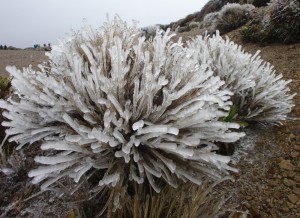 The Hertz van and one vehicle left their start point at Taradale’s Eastern Institute of Technology and headed up the Taihape Road to Jack Roberts’ property, Te Mahanga Station. And oh, the wonder of modern technology… a dinky red warning lamp on the van’s dashboard kept flashing ‘cold outside temperature’. No longer do we lick a finger and stick it out the window to test the air temperature. Passing over a small bridge, we made our way past an array of sheds, outbuildings and an amazing assortment of farm machinery to the paddock, where we parked the vehicles.


Then it was on with our warm gear and after a team briefing, we started along the farm track down to the Mangataramea Stream and two minor crossings. There was no doubt we were on private property, with a number of warning signs nailed to trees along the way. The track is used, with kind permission of the owner, by trampers and hunters alike to reach the south-western side of the Kaweka Forest Park.

There were large beech trees, many regenerating rimu, fungi and assorted ferns, and a pretty stand of bush with just the odd overgrown section along the way.

Extra gear, longjohns, hats and mitts were donned as we climbed out of the bush for the final ascent through scrub and out onto the tussock tops. As expected, the biting southerly wind nipped at any body part that wasn’t covered.


Murray G, the only one left with bare legs, finally succumbed to the cold and emptied his pack to find his longjohns while we stood round, marking time! Finally on our way again, we followed easy undulations alongside the bush edge, winding our way round eroded greasy clay pans, past the Hogget and down to the shelter of the bush for an early lunch. It was cool, so we didn’t linger. 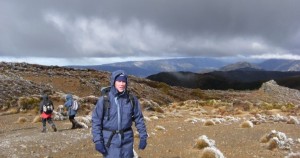 What we did find surprising was the lack of snow – but there was plenty of ice. The photographers had a field day snapping ice-covered tussocks, beech trees and flowers. Back on track, retracing our way out of the clay pans and onto a spectacular expanse of golden tussock, we were able to pick out the base of Mt Ruapehu below a thick bank of cloud, the Manson area, Mt Meany and the distant bluffs of the Taruarau River. The sun shed an eerie glow across the landscape but it couldn’t compete with the dark-looking front looming from the south as we continued along the tops and down to the bush edge.

We had one last look around as we waited for everyone to catch up, then back down to into the shelter of the bush to meet up with John M who had been doing some track clearance. Back at the cars by 2pm, it had been a nice early day and so with time to spare, Colin suggested he take us on a tiki tour down to both the camping sites at Kuripapango – and it was the first time for most of us. The new site was much larger than we expected and, for the time of year, rather busy; we counted at least 10 tents and room for dozens more.


Thanks to our driver for a safe drive back to Napier.

Aranga Hut On Saturday 14 January the tramp was changed to a loop in the Northern Ruahine Range. … END_OF_DOCUMENT_TOKEN_TO_BE_REPLACED

Aranga Hut On Saturday 14 January the tramp was changed to a loop in the Northern Ruahine Range. … END_OF_DOCUMENT_TOKEN_TO_BE_REPLACED