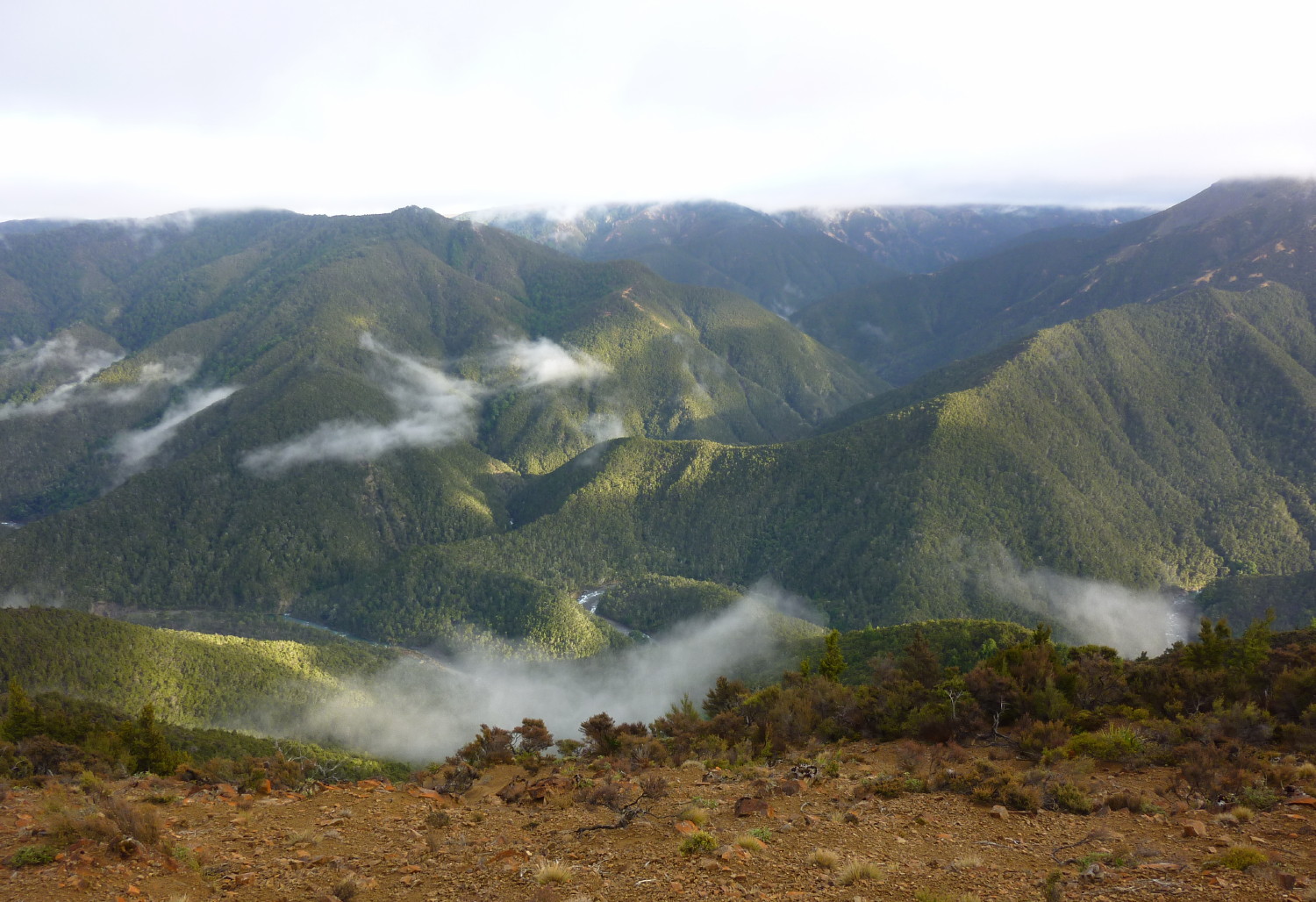 Kiwi Mouth Hut, Sat/Sun May 21/22 2011. Map BJ37
We’ve gazed at Back Ridge from the opposite ridge when walking the Kiwi Saddle – Castle Camp – Kaiarahi circuit. Now, thanks to Ted’s suggestion, we are walking some new tracks.
Thanks to Brian for dropping us off at Makahu Saddle, we start the weekend on a gloriously sunny and calm day. The climb up to Kaweka J is steady, with stops to take in the views. The mist is hanging in the valleys and we can see Mahia and the Cape. Unfortunately, the sun is straight into the lens, and so photos are difficult. 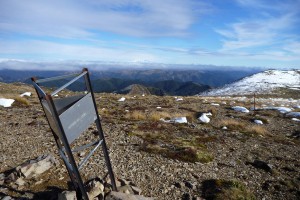 On nearing the tops, a light dusting of snow covers some ridges, and only small pockets of snow remain from earlier in the week. From the top, we get a splendid view of Mts Ruapehu and Ngauruhoe. We stop near the memorial cairn for a photo opportunity, and then move on down to Back Ridge. There is one gnarly bit of scree, otherwise the steady descent is easy going. Once the junction for Back Ridge Hut is reached on Sterns Saddle, it’s a small grunt back up again to emerge from the bush to great views. We picked out all the major features such as Venison Tops, Mt Manson, Mt Meany and back to the main Kaweka Range. It is too early for lunch, so we press on to the next junction. 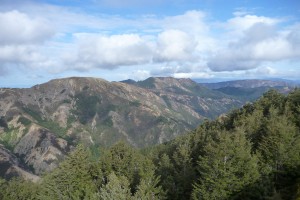 At the Back Ridge Bivvy and Rocks Ahead junction, we stop and find a spot for lunch out of the wind. Where did that come from? The temperature has dropped and the sun seems to have disappeared. We can clearly see the track down to Kiwi Saddle from the tops, and then the ridge track around to Castle Camp and Kaiarahi. Due to the cold, lunch is brief and we decide to continue.

I had estimated that it would take us three hours to Kiwi Mouth. The DoC sign indicated 3hrs 45. The track is not marked, but is obvious on the ground. It follows the ridge on the western side. From the Castle Camp ridge, it looks like the track is in bush, but in fact, it is on open ridge tops. We hear a deer squealing close by and see a lot of deer sign. No wonder Back Ridge Bivvy is favoured by hunters. The track ahead can be viewed easily with a few undulations up to the final high point 1258. It has been cut wide through low scrub, and calls for a stop to muster some energy before this last climb. On 1258, we get out the GPS, just for fun you understand, and note that according to it, we are at 1288m. Ah well, we get the map out for some more orientation, and a break before the downhill.

At 3.10pm, we get our first view of Kiwi Mouth Hut. No smoke as yet, from the other Napier Tramping Club party tramping into Kiwi Mouth Hut via the Smith Russell track and Cameron Hut track. My right big toe is on fire from the downhill. I dream of cooling off in Kiwi Stream. The bush is typical of the Kawekas, with kanuka providing cover. At four o’clock, my wish is granted as we cross Kiwi Stream. We did it in three hours. 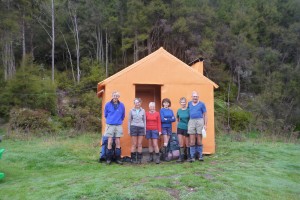 The hut is 50m downstream, and there is smoke. The advance party had arrived at 3pm and got the billy on for us. But wait, there are only four bunks and there are six of us. Geoff opts to use his bivvy bag and fly (if you could stretch your imagination) and I opt for the floor. But first the usual wash and change whilst we’re warm from our downhill. Kiwi Stream and the Ngaruroro River converge 50m downstream from the hut where there are some big boulders. Having a wash by Kiwi Stream is a joy, as I never mind the cold water. It doesn’t feel too cold yet.

After a hot cappuccino and some chocolate gingernuts, life feels good. This is my third visit to Kiwi Mouth Hut, each time is different as I’ve had different company, and arrived from a different direction. After dinner, we’re in bed by 7.30pm. More chatter in the dark before we all fall asleep. 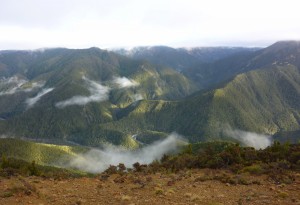 The next day, we have a one-hour climb to 1238m, after which you enter the bush, and come to a track junction to Cameron Hut. We follow the track to Kiwi Saddle Hut via the High Level track, which I have not done before. It crosses some clay pans and scree, and then descends into bush. You can hear water rushing and eventually cross a tributary to Kiwi Creek. From here, it’s a climb all the way to Kiwi Saddle Hut, passing the junction for the track to Kiwi Mouth Hut via Kiwi Creek.

We arrived at the hut at around 11am, and decided to have a hot brew and early but long lunch. We sat outside in the sun, as the hut was in shade and too cool. Ted checked out the hut book and saw the entry from yesterday’s club day tramp. We hope all went well for them, with some of the party making a last-minute decision to do the loop from Kiwi Saddle to Kiwi Mouth via the High Level track, and then back up to the tops via the Smith Russell track.

After lunch, it began to cool, and so we made our way up to the ridge and out to the Lakes car park. For the three of us who tramped in via Kaweka J, we are grateful for the chance to walk the Back Ridge and out via Kuripapango. We all felt a great satisfaction with our efforts, and had enjoyed the chance to explore new tracks.

PS. We also survived the prediction that the end of the world would begin that weekend. The earth did not move for us…