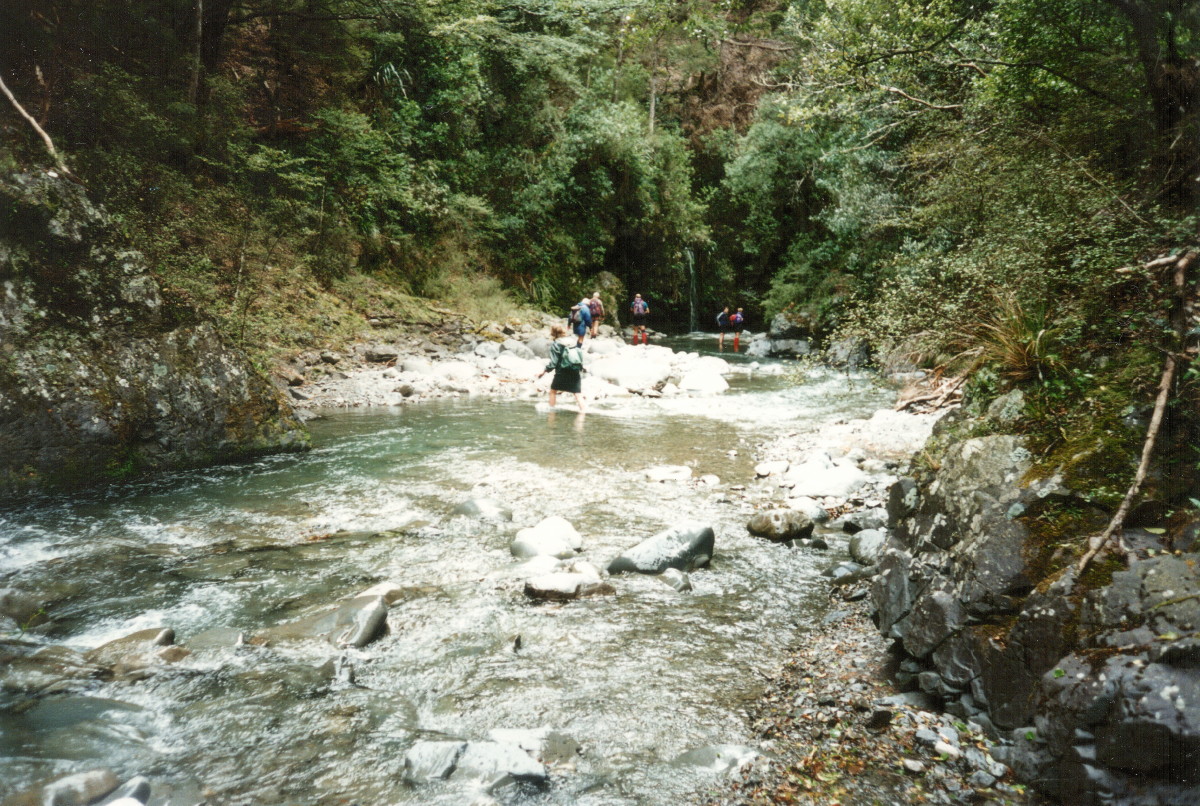 As we were unable to get a permit for No Mans, we decided on this river trip from Makahu Hut into Pinnacle Stream, down the Makahu Stream to Makahu Road where our vehicles would be waiting. We arrived at the Makahu car park in light, drizzly rain, and some decided to go along the Kaweka Flats track then back to bring the vehicles round to pick us up. 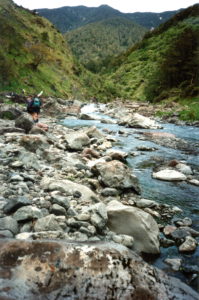 The broad part of Makahu Stream

However, tragedy struck. Three of our regular lady trampers had to abandon the trip with horrific problems! One was suffering from split ends, one was wearing only dry-weather make-up and the third had a broken fingernail. They were chauffeured away by a gallant male who put his honour on the line to get them home safely.

The rest of us headed along the Flats track for a short distance and then bush-bashed down to Pinnacle Stream, dodging a lot of debris and a small waterfall at the back of Makahu Hut. Pinnacle Stream soon joined Makahu Stream and widened out with the extra water. Small trout were seen; there were spider orchids on some of the shaded banks and many native irises in flower. 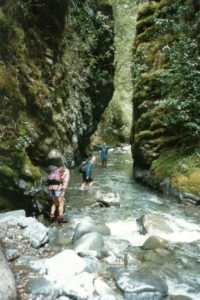 Further down, we negotiated a small gorge and had a quick lunch break, as the pace had been rather slow. The weather was improving all the time and two deer were seen on a ridge by some of us. The river was widening out, with numerous crossings, and most of us having a slip at some stage.

About 4pm, we came in sight of the bridge just as our vehicles arrived. Everyone had an enjoyable day. We swapped stories and headed home thoroughly satisfied with the tramp.

Mackintosh Hut/Rogue Ridge, Kaweka FP, Saturday 17 September 2022 Banner Photo: The leaning sign at the top of Mackintosh Spur It was a sunny, … END_OF_DOCUMENT_TOKEN_TO_BE_REPLACED

Shine Falls, Local, Wednesday 7 September 2022 Banner Photo: Group selfie and the falls Nine of us set off on a very frosty morning from Park … END_OF_DOCUMENT_TOKEN_TO_BE_REPLACED

A-Frame to Stanfield Hut, Ruahine FP, Saturday 3 September 2022 Banner Photo: At the A-Frame Hut We had a full vanload booked to do this trip. … END_OF_DOCUMENT_TOKEN_TO_BE_REPLACED