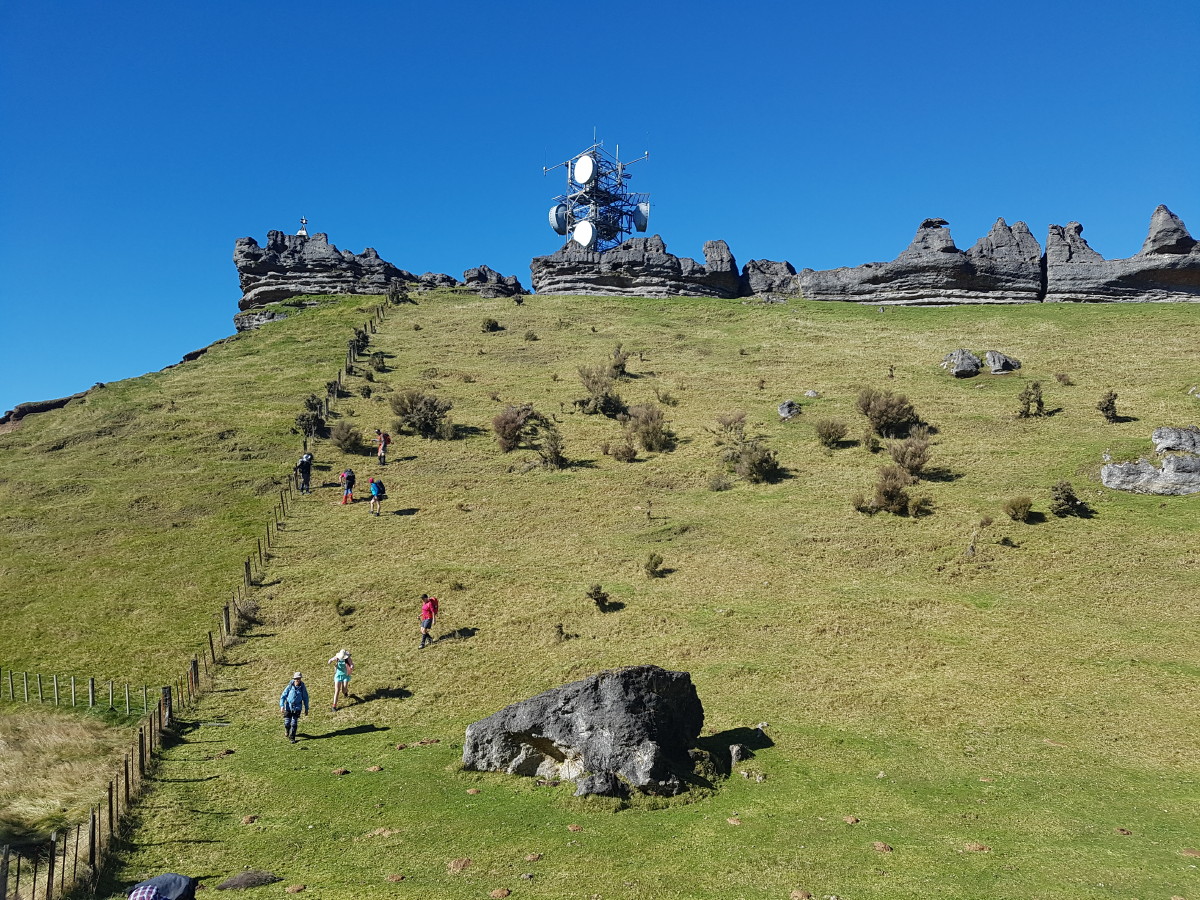 Twelve trampers set off at 7am, heading up the Puketitiri Road to turn right onto Potter’s Road. We had the farmer’s consent to use his land to access Te Waka from this side of the range. This was an area that had been done before by some in the group, but (not having a set track) had previously taken some false leads to get to the cellphone tower at the top. 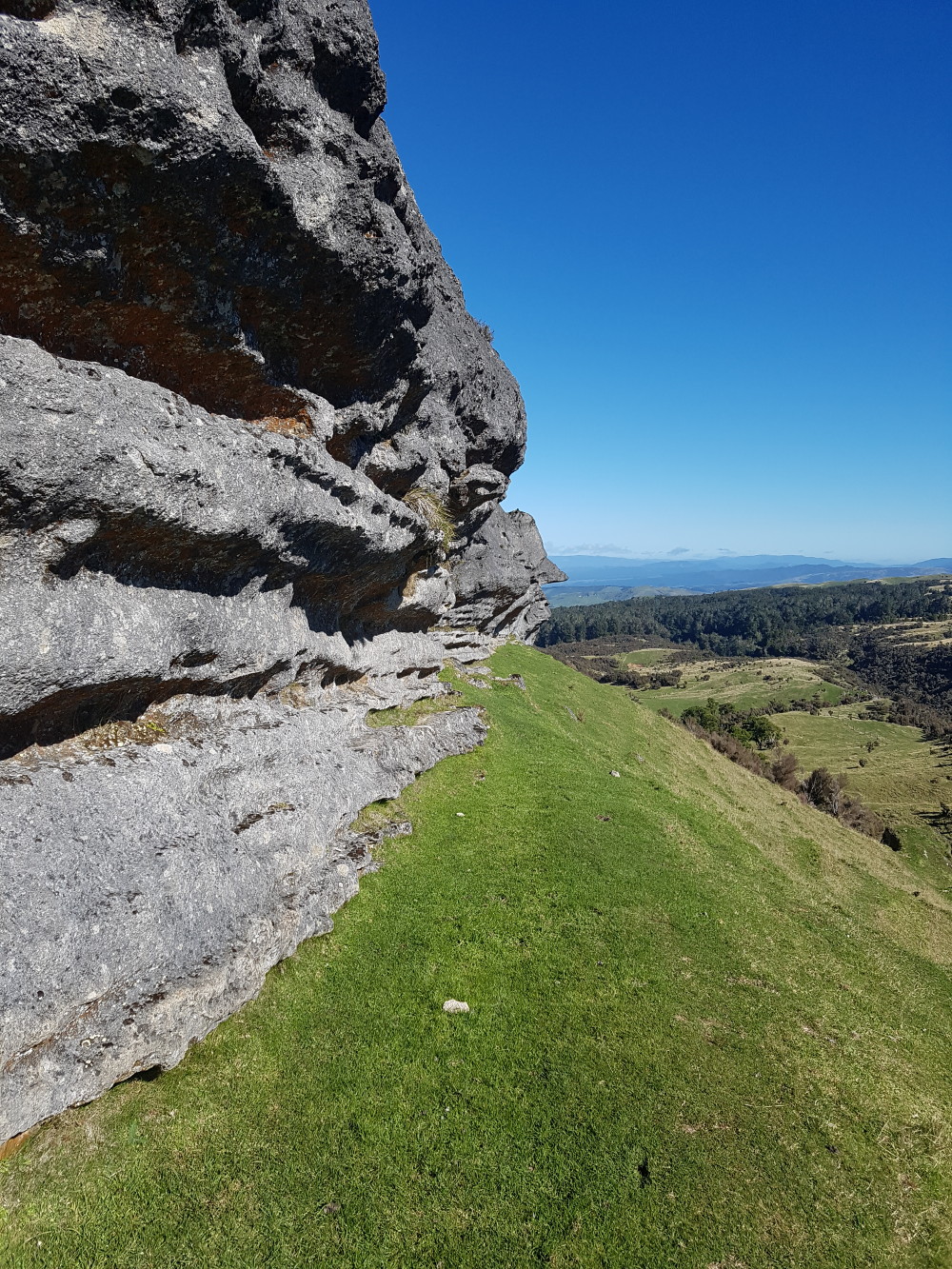 One of the many rocky bluffs on Te Waka

This is the tower that can be seen from the Napier-Taupo Road, so it was an intriguing walk for those of us who hadn’t been there, to see the countryside from this angle. Fortunately Graeme, who was leading the group, knew the area well so we were able to take a circular route to get to the tower and back to the cars without too much backtracking on the same route.

At the start, it was the first decent frost I’d seen this autumn with the grass all white on arrival. Hats and gloves were used by most of the group at that stage but were quickly packed away with the hill climb and sunshine. A deer had been seen from the road and another was spotted close to one of the many patches of bush on the farm. It was lovely to hear quite a few birds in the bush patches and it made for a very interesting walk even though virtually all of it was on the farmland. The views were fantastic and the rock formations when we were nearing the top were very striking.

We had a morning tea stop, by some tarns which still had quite a bit of water in them. From there, it wasn’t too far before a leisurely lunch at the cell-phone tower with views of Napier and over to Cape Kidnappers as well as the Napier Taupo road leading up to Titiokura. 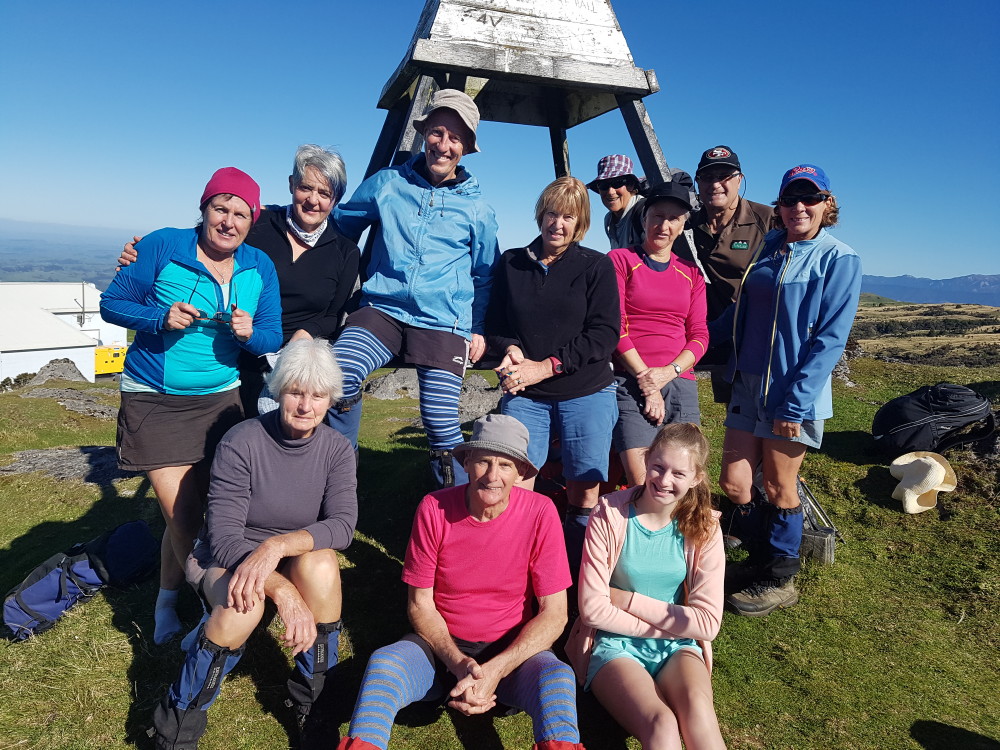 The happy group, out on a fabulous blue sky autumnal day

On the way down, we discovered a cave/tunnel among the rock formations which could have provided shelter for us all in adverse weather – albeit somewhat smelly as it is obviously used by farm animals. It was a steady climb down and eventually back to the cars for an early return to Napier about 4.30pm. Overall it was a great tramp with fantastic sunshine and no wind.

Mackintosh Hut/Rogue Ridge, Kaweka FP, Saturday 17 September 2022 Banner Photo: The leaning sign at the top of Mackintosh Spur It was a sunny, … END_OF_DOCUMENT_TOKEN_TO_BE_REPLACED

Shine Falls, Local, Wednesday 7 September 2022 Banner Photo: Group selfie and the falls Nine of us set off on a very frosty morning from Park … END_OF_DOCUMENT_TOKEN_TO_BE_REPLACED

A-Frame to Stanfield Hut, Ruahine FP, Saturday 3 September 2022 Banner Photo: At the A-Frame Hut We had a full vanload booked to do this trip. … END_OF_DOCUMENT_TOKEN_TO_BE_REPLACED