With a full vanload and John D driving, we headed off down through Maraekakaho, past Keruru Station and into the Mangleton Valley. We went first to Sentry Box Hut car park to drop off a group of seven, then turned back to Master’s Shelter where John D, Juliet, Mary, Margaret and I were going up Golden Crown Ridge. 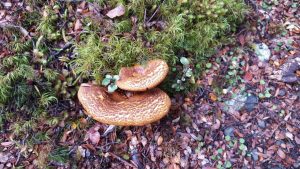 Fungi seen on the track…

The weather was absolutely perfect – a mild day with barely any wind. The track was steep as always, right from the get-go, but we paced ourselves with many stops to admire the proliferation of fungi – 15 or 20 different species in different hues (purple, brown, white, red and various other shades). There was a lot of bird life, too, in particular many encounters with the cheeky little tom-tits. 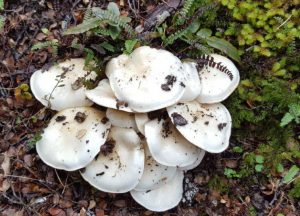 Just as we reached the junction, we were met by the two Fionas in the lead of the other party, who had come up from the Sentry Box track, and were about to descend Golden Crown Ridge. Their group had already had lunch so they went on to retrieve the van. We had our lunch, then followed them down. The track was steep in places, so it was a good work-out for the quads.

Unfortunately the Ruahines claimed a few casualties – Mary and Margaret were stung by wasps; John R was feeling unwell so he and Di went back down and along to the road to meet the van; Bryan sprained a finger; and Sue had a fall with a suspected broken wrist. Di did a marvellous job administering first aid. 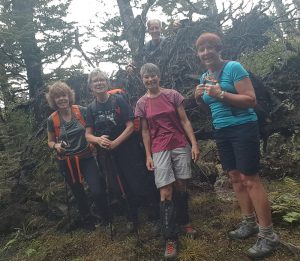 But apart from the injuries, it was a good day enjoyed by all.

Sparrowhawk bivvy, Ruahine Forest Park, Saturday 6 August 2022 Banner Photo: The view east, towards the Wakararas and beyond On a beautiful … END_OF_DOCUMENT_TOKEN_TO_BE_REPLACED

Prologue: The author was on the Whirinaki tramp, reported on this website under the headline 'We observe a mock turtle and the rodent of Upper Te … END_OF_DOCUMENT_TOKEN_TO_BE_REPLACED

Ruahine User Group A meeting was held on Monday 25 July, in the NZDA rooms in Dannevirke.  Julia … END_OF_DOCUMENT_TOKEN_TO_BE_REPLACED

Ruahine User Group A meeting was held on Monday 25 July, in the NZDA rooms in Dannevirke.  Julia … END_OF_DOCUMENT_TOKEN_TO_BE_REPLACED

Ruahine User Group A meeting was held on Monday 25 July, in the NZDA rooms in Dannevirke.  Julia … END_OF_DOCUMENT_TOKEN_TO_BE_REPLACED

Ruahine User Group A meeting was held on Monday 25 July, in the NZDA rooms in Dannevirke.  Julia … END_OF_DOCUMENT_TOKEN_TO_BE_REPLACED