On a crisp, late-Autumn day, two full vanloads of eager trampers set off with the sun shining.

We began from the Titiokura Summit on the Napier/Taupo road and had permission from Waitara Station to cross their farmland. Ted and Paul had volunteered to drive the two vehicles to pick-up points, as part of the group was to head to Galbraith Hut. Undulating terrain greeted us as we started off at 8am mainly on farm tracks. Low fog hung over the Napier/Taupo road with clear skies above, and wonderful views over the ranges; the low cloud almost looked like a sea with the ranges poking out above.

A good pace was set and the group made fine progress over the farm tracks, admiring the views of the ranges and the mighty Mohaka River; livestock on the station were plentiful and cattle and sheep looked in very good condition.

The first big climb gave even more spectacular views because by this time the fog had mostly disappeared. Going down the other side into a sheltered valley, the group was intrigued by a lovely blue-barrelled cow lick sitting in the centre of this area. Some had to be restrained from getting their tongues onto the apparatus – resorting to a taste from their fingers instead.

Again, it was good undulating terrain with a fair bit of long grass to navigate (a great work-out for knees and thighs). The weather got better and better, no wind and deliciously warm. We had the thrill of seeing a wild deer with two sheep hot on its tail, skirting around the side of a hill. Shortly after a morning tea stop, we came to another big climb. Who should be descending this but Ted, Debra and Mary. Here, some of the party joined Ted and company and headed off to Galbraith Hut, which we could see in the distance. 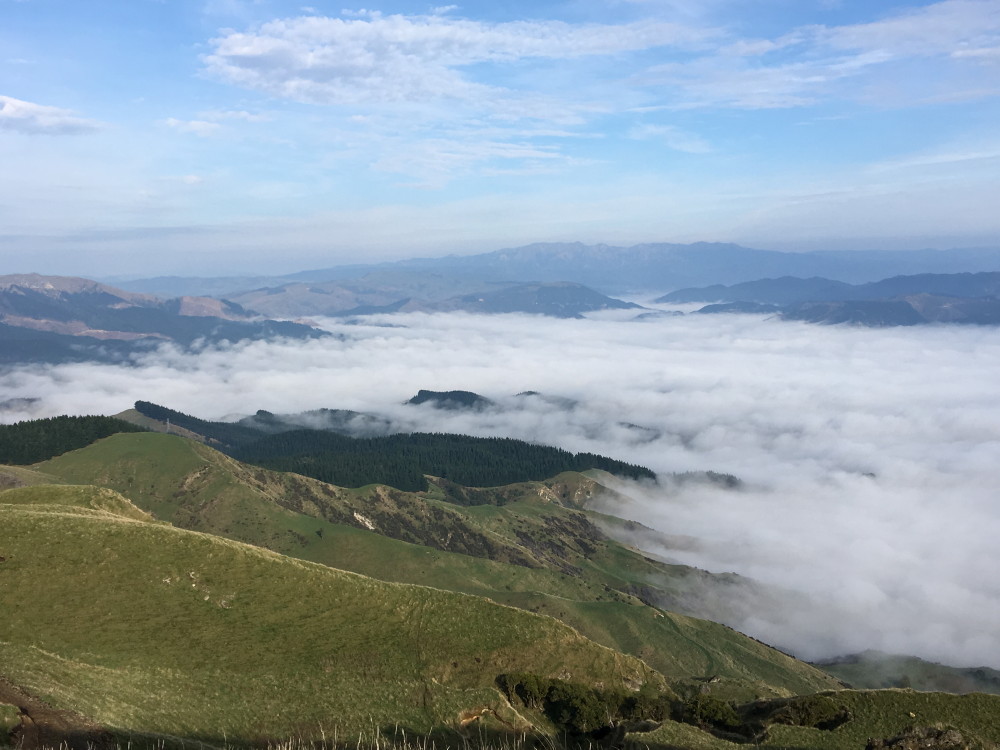 The fog was gradually evaporataing

After a good huff and puff climb up to the ridge, we could see the other party making their way to Galbraith Hut well below us. Once up to the ridge, we skirted around the other side and up again to a lovely little protected depression for lunch. From here, we could look up to the communications towers we were aiming for. At the top, and gathering around the poor toppled trig, we had another stop to admire the spectacular views – even though it was a bit hazy.

From the Taraponui communications mast, it was a steady downhill walk to Bell Rock, where we joined the DoC track. We could just make out Cape Kidnappers through the haze. On arrival at Bell Rock, we encountered three folk (a local young man with his two British visiting aunties). They were astonished to hear that we had walked from the Napier/Taupo Road – obviously, they thought we were a bunch not to be trusted or else completely mad because they upped sticks and were off very quickly.

After our short stop here, we made our way to the road, but not before catching a fine view of Taupo’s Mount Tauhara in the distance. The walk through the native bush to the road was beautiful; most impressive was the birdsong (DoC has done a grand job of vermin control). We reached the road to the waiting vans and the party from Galbraith who were walking in to meet us at 3.30, so a great day’s tramping.

Thanks to Ted and Paul for the vehicle positioning and to Geoff as driver and organiser.