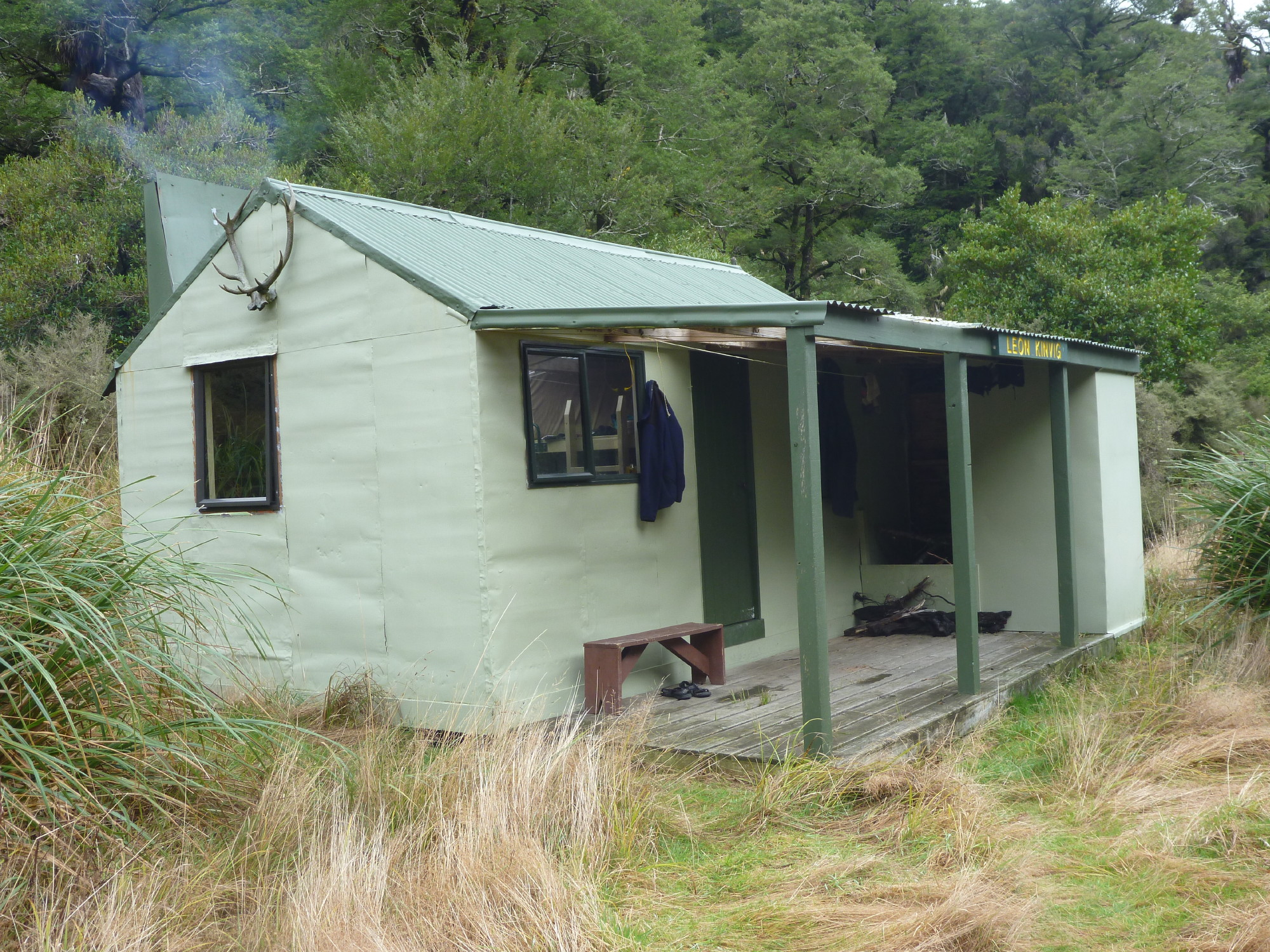 There were only three of us for this weekend tramp: Les, Simon and myself. It has been a few years since the club had this on the trip list, and those on it then all remember it well. They faced a blizzard coming across the Ruahine tops. Our weekend forecast was not too flash, either: heavy rain on Saturday and then becoming fine on Sunday. 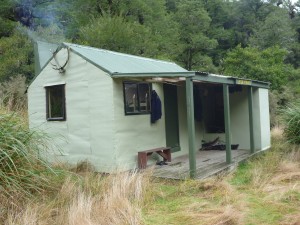 We had helped the day party to move the van around to the farmland where they would be exiting the Mangatewainui Stream.

We set out from the Ngamoko road end at 8.50am and soon passed the day party as they stopped to take layers off, but we did not see them again.

The route begins on a farm track and runs through bush before you exit to a small, open area. Here, you can see the Ruahine tops in the distance – and our day’s high point.

The track is in a poor state. Parts of it are falling downhill, but it is still easy to follow. The stink is what hits you hardest, on such wet tree days. I thought that I might be following someone who had some bad perfume, but then the penny dropped. The wet forest smells like disinfectant.

We reached the junction for Makaretu Hut, with another glimpse of the Ruahine tops. We decided to stop at the junction where the day party would go down to the Mangatewainui Stream, while we would head north to Leon Kinvig. We lunched early while we waited for the day party, but they made no show. At 12.15pm, we decided to press on. 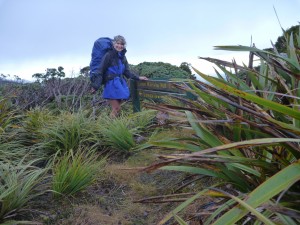 From here, the track climbs steadily and it took 1hr 20 mins to reach the junction for Leon Kinvig Hut. We had 360-degree views.

With a downhill to the hut, Simon and Les powered on. I took it a little more steadily, as the grass and track was extremely damp and greasy, and I like to err on the cautious. We made the hut at 2.35pm. Wow! That was a fast trip, compared to the last time.

The crew had a warm cuppa before using the last of the daylight to collect firewood. It was wet, but we left it outside the firewood box on the verandah, to dry out. We lit the fire, which has not improved since our last visit and is terribly smoky. There is a diatribe in the hut book, which none of us wanted to read, but it discusses the appalling fireplace. Hopefully DoC will fix it (I recommend the same fix as Middle Hill Hut in the Kaweka FP, which as also was a very smoky fire and is now wonderful). For days, my gear reeked of the smoke. 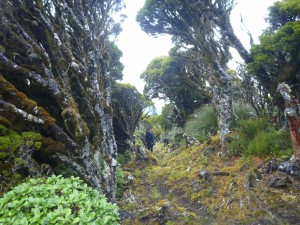 We had a great night. The rain began at nightfall and later the wind rose. We wondered what Sunday’s weather would be like. It rained while we breakfasted, but just as we were leaving, we detected a break.

Yippee! We made it back up to the tops in an hour and then quickly retraced our climb of yesterday, this time downhill to the junction. We had been tramping for two hours from the hut, and decided it was time for a longer break. Somehow, the walk back to Ngamoko road end dragged on. We reached the open section and had another break, and a look at the tops. But the rain-bearing clouds could be seen coming in fast. Raincoats were donned, and we moved on again. The farmland beckoned, but it was still an hour’s walk to the road end car park. Thoughts of the Norsewood Cafe spurred us on.

We were lucky, because as soon as we had reached the car park and changed our clothes, the heavens opened.

We relaxed over a coffee and chat in the Cafe, and marvelled at the great weekend we had just had.

A year in the life of a GuideOn June 3, Graham Leech gave a presentation at the club meeting … END_OF_DOCUMENT_TOKEN_TO_BE_REPLACED

AGM, 20 May 2021 At the AGM the following committee was elected (see also the 'Contacts' Page on … END_OF_DOCUMENT_TOKEN_TO_BE_REPLACED

A year in the life of a GuideOn June 3, Graham Leech gave a presentation at the club meeting … END_OF_DOCUMENT_TOKEN_TO_BE_REPLACED

AGM, 20 May 2021 At the AGM the following committee was elected (see also the 'Contacts' Page on … END_OF_DOCUMENT_TOKEN_TO_BE_REPLACED