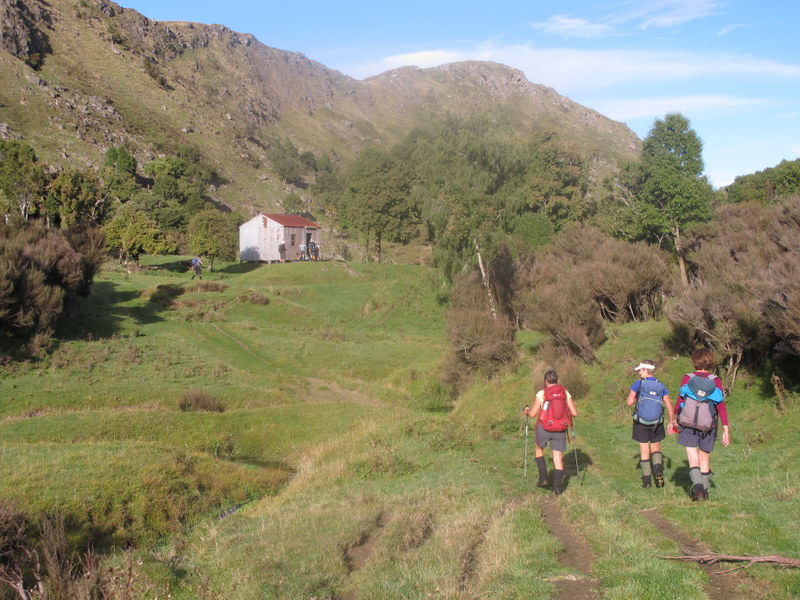 We left the car park earlier than usual, mainly because many of us had been woken by a ship’s continuous foghorn as early as 4am. As we travelled out of Napier, less fog was present. In fact, it looked like it was going to be a perfectly still, warm day. Last time I was in Galbraith Hut was when we had to exit from the tops because of a sudden downpour, dreadfully bitter winds and poor visibility. Most people in this latest party either hadn’t been to Galbraith Hut or had tramped up from the farm.

After leaving the vehicles at Holloway’s farm, we followed the farm tracks. Soon we came across a large pack of Shetland ponies over the fence, who showed that they appreciated some company. We couldn’t see the masts because the sun was shining immediately above them. 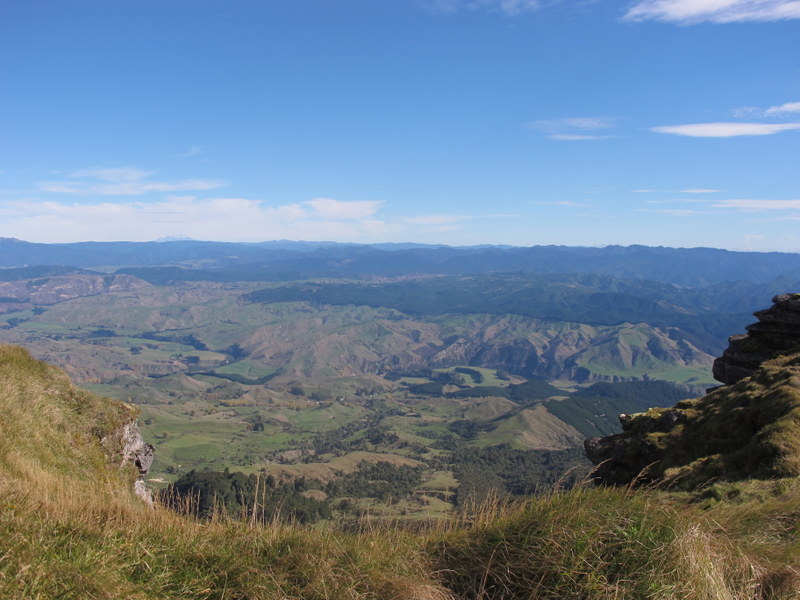 The Waitara valley, looking south west with Tongaririo in distance,

Within an hour, we found the historic Galbraith Hut nestling among the trees and perched under a ridge. I was disappointed to see that many of the Royal photos that once lined the timber walls had been stripped. However, the wooden chandelier and a few old cooking pots and billies remained. The sun was streaming down, so it was tempting to stay longer than a quick snack and drink.

As the climb grew steeper, the group quickly split into packs, regrouping at various points. We found ourselves tramping on a variety of animal tracks, across grassy paddocks and sidling around ridges. There were a number of fences to encounter and gates to open and close. The huge communication towers could now be seen on the top – our destination.

The leading group found a suitable trough on the saddle to gather, relax and enjoy morning tea in the sun. The views towards the Kawekas were exceptional. Now, just one more push to the top! 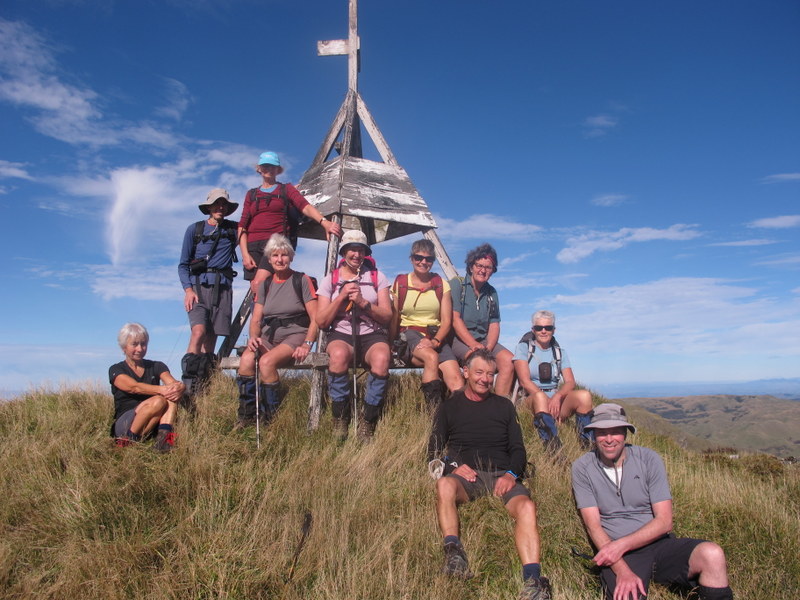 The next stage was a little more challenging with a few more sloping fences to climb over. But the higher we got, the wider the views. It didn’t take long to reach the Taraponui masts and communications shed. It was surprising how calm it was up there, considering it was nearly the end of autumn.

Alison and Geoff identified and pointed out different landmarks. We could see as far as the Panekiri Ridge at Waikaremoana, Mt Tauhara in Taupo and familiar peaks in the Kawekas and even further north. The only place we couldn’t see, because of a streak of low cloud, was Napier. A traditional group photo at the trig, then a well-deserved lunch sitting next to the trig – we had climbed just over 700 metres with the trig sitting at 1306m.

After a lengthy lunch, we retraced our steps back to the farm, often stopping to take in the wide expanse of rolling hill country around us. It was a very satisfying and enjoyable tramp with most people in the party walking in different groups either going up or down. This makes for a pleasant tramp – just the way it should be!
The group arrived back at the vehicles, hot and thirsty and feeling particularly contented with their day’s efforts on this beautiful Hawke’s Bay day.

Aranga Hut On Saturday 14 January the tramp was changed to a loop in the Northern Ruahine Range. … END_OF_DOCUMENT_TOKEN_TO_BE_REPLACED

Aranga Hut On Saturday 14 January the tramp was changed to a loop in the Northern Ruahine Range. … END_OF_DOCUMENT_TOKEN_TO_BE_REPLACED