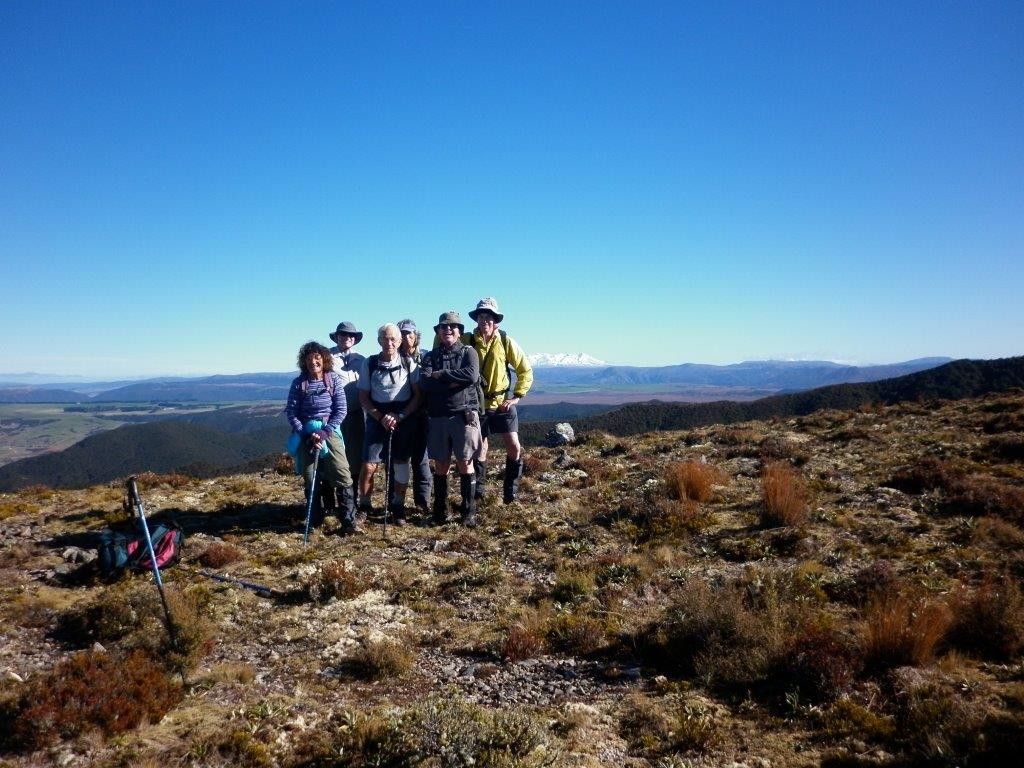 The day was better than we could have hoped for as we left the Church Road Winery in a van plus car. Fifteen people was a good turn-out.

We made our way up the Napier-Taihape road to the “Gentle Annie”. Once down the other side, we came to a farm gate to our right, passed a collection of farm buildings and stockyards and found a parking spot where we disembarked and readied ourselves for the tramp ahead. Someone said that there didn’t seem to be much wind there, but sadly that was not to last.

Organised, we set off, with some of the party opting to do shorter trips with a view to leisurely enjoyment of nearby native bush and to exercise their photography skills. The remainder trudged up the 4-wheel track and descended to a stream, where some opted to boulder-hop to keep their feet dry, with mixed agility and results.

The bush is attractive here but, as we discovered further on, the tracks were not well defined in places and those in the lead needed to keep their wits about them. Initially, the climb was up a gentle slope until we approached the scrub, which was regenerating after the land had been retired from pastoral farming. From there, it became steeper and the scrub was over head-height initially, making navigating more challenging. After climbing steadily for more than an hour, we found the scrub became smaller and gradually gave way to grass and tussock. 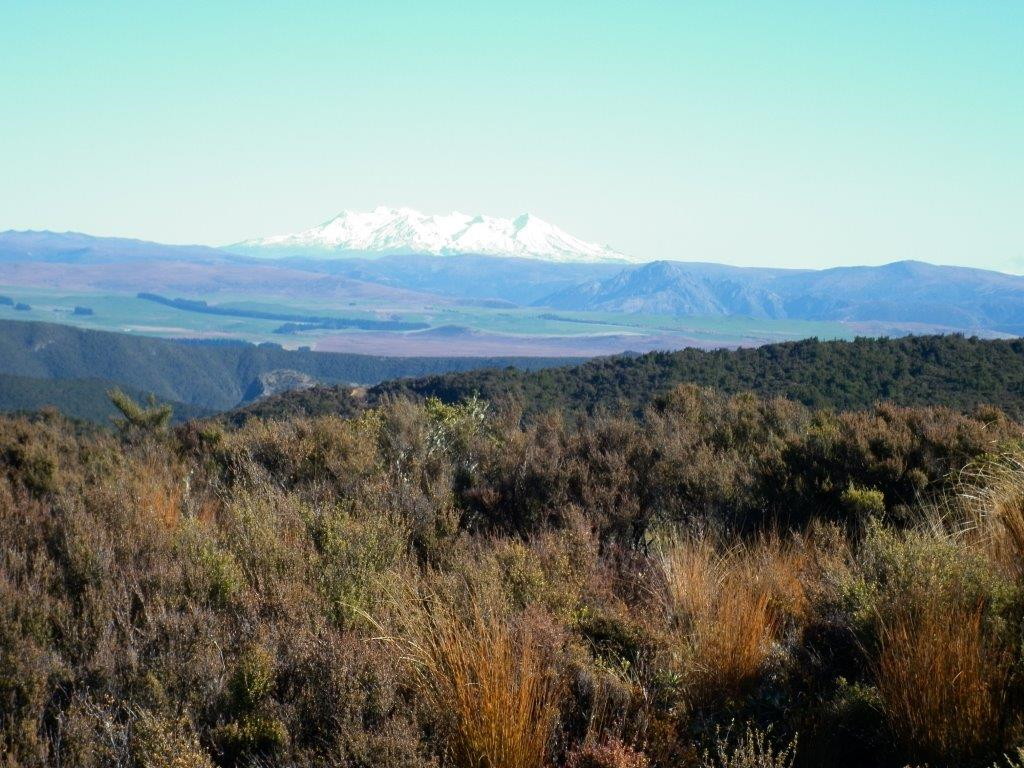 Ruapahu covered in snow on the horizon

By now, we were very aware of a keen nor’wester blowing off the Central Plateau; it had a real bite. The landscape was more gently rolling than mountainous, but there were some outstanding views to be had. Not least of these was the sight of a snow-blanketed Ruapehu and Ngauruhoe standing out against a clear blue sky.

On the way, we caught a glimpse of a private hut set in a patch of bush. Four of the party opted to stop at that point and to stay until the main group returned. The rest pressed on until sentinel rock formations were spotted ahead. That was the top of the Hogget Range and from where we could look across at Te Iringa, Kaweka J and other notable peaks.

The wind was still biting and we opted to hunker down where sections of the hillside had eroded away, providing hollows in which we nestled to enjoy our lunches before returning back the way we came, collecting other members as we went. There was universal agreement that it had been a very enjoyable day. Thanks to the farm owner for permission to cross his land and to our drivers.

Sparrowhawk bivvy, Ruahine Forest Park, Saturday 6 August 2022 Banner Photo: The view east, towards the Wakararas and beyond On a beautiful … END_OF_DOCUMENT_TOKEN_TO_BE_REPLACED

Prologue: The author was on the Whirinaki tramp, reported on this website under the headline 'We observe a mock turtle and the rodent of Upper Te … END_OF_DOCUMENT_TOKEN_TO_BE_REPLACED

Ruahine User Group A meeting was held on Monday 25 July, in the NZDA rooms in Dannevirke.  Julia … END_OF_DOCUMENT_TOKEN_TO_BE_REPLACED

Ruahine User Group A meeting was held on Monday 25 July, in the NZDA rooms in Dannevirke.  Julia … END_OF_DOCUMENT_TOKEN_TO_BE_REPLACED

Ruahine User Group A meeting was held on Monday 25 July, in the NZDA rooms in Dannevirke.  Julia … END_OF_DOCUMENT_TOKEN_TO_BE_REPLACED

Ruahine User Group A meeting was held on Monday 25 July, in the NZDA rooms in Dannevirke.  Julia … END_OF_DOCUMENT_TOKEN_TO_BE_REPLACED