It was a beautiful winter’s morning when we arrived in convoy at Robson’s Lodge. Robson’s Lodge was built in 1908 by David Lumsden who began farming with his partner Leo Lopdell at Kuripapango in 1906. The Lumsden family farmed in the district for 44 years until they sold the farmland and house to the New Zealand Forest Service. The house was used by Morrie Robson, New Zealand Forest Ranger, and his wife Coral from 1952 until 1966 when Morrie died. Coral lived in the house for another year. Since the 1970s, it has been used as overnight accommodation and base for school trips and camps. Info. from DoC website. The history is well documented in the lodge lounge along with photos taken of the Lumsdens and Morrie and Coral Robson. 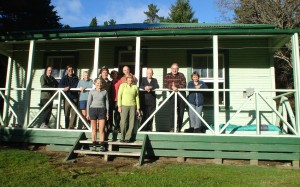 We set up camp and got the wood burners going, one in the kitchen to heat the water and one in the lounge, which kept us overheated.

A cuppa was called for and so we relaxed on the verandah for a short while. Six of us decided to do a small day tramp from the Lakes car park up to the Kuripapango mast and then down the Smith Russell track to the water gauge and Kuripapango DoC campground. Those not tramping would continue the tradition of decorating the lounge and also a newly cut Christmas tree. They were spoilt for choice in their selection of a Christmas tree, as there are many windborne saplings just off the Kuripapango Road. 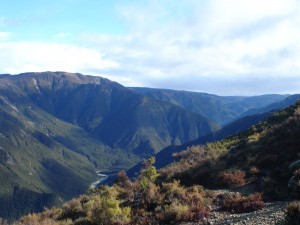 We enjoyed the views from the lookout 15 minutes up from the start of the track then made our way to the top. It got breezier as we ascended. Magnificent views from the mast, then the quick trip through the contorta to the junction of the Smith Russell track down to the Cameron car park. We decided not to have lunch as we could not find a spot out of the wind, but to walk back to the lodge for a late lunch/afternoon tea.

Sue and Gary had done a wonderful decoration of the ceiling and tree. Lunch was accompanied by sausage rolls which had been heated up in the wood burner stove. Then time for a hot shower and change into our party gear. The theme this year was Black & White and some of us excelled in our choice of costume, raiding op shops or daughters’ wardrobes. 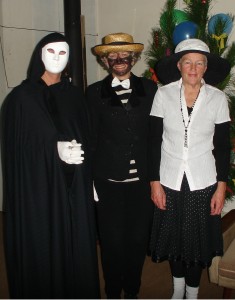 We had a merry time, and cooked two roast chickens on the portable gas BBQ that Alison had brought along, plus a lovely beef casserole that Sue (Mrs H) had made. The men provided the vegetables with white cheese sauce and some pavlova dessert. We also had Julia’s dessert of dried fruits (prunes, figs, apricots, pineapple etc), cooked in orange juice and red wine. We all ate till bursting.

After dinner, Santa Claus visited, and we all had a chance to sit on his lap and pick a pressy out of his bag. Santa’s pressy to Simon was envied by the girls as we have all been trying to source the wine with the screw on top that doubles as a wine glass (plastic of course).

The two chickens Rangi and Chicken-Licken were joined by a third which we named Robson (get the connections?) We were all getting very hot and so a walk outside to look at the stars on a clear night was very pleasant.

On Sunday, after breakfast we cleared up and decided to have a look at Blowhard Bush. We have passed it many a time, but some of us had never been around it. We all walked the Tui Track, and paused at the lookout. Bad weather was rolling in from the south-west, so it was time to return home to Napier.

We all enjoyed the stay at Robson’s Lodge and the short walks. It is a pity that more members didn’t join us, as there was plenty of room and the ease of access to the lodge made it a comfortable and easy winter solstice trip.

Aranga Hut On Saturday 14 January the tramp was changed to a loop in the Northern Ruahine Range. … END_OF_DOCUMENT_TOKEN_TO_BE_REPLACED

Aranga Hut On Saturday 14 January the tramp was changed to a loop in the Northern Ruahine Range. … END_OF_DOCUMENT_TOKEN_TO_BE_REPLACED