Fifteen trampers travelled in three 4WD vehicles to the car park halfway up the Gentle Annie. The weather was fine, with the sun peeping through the cloud at frequent intervals. Climbing up the somewhat overgrown track with its short, greasy, bare clay sections, the party reached the 1191m point and enjoyed views over the Northern Ruahines, and to the farmland on the distant Tahuhunui Range to the West. There were small traces of snow. 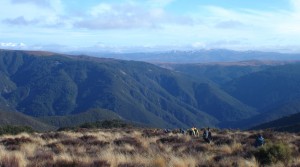 Further on, we reached the next feature at 1324m, the Te Iringa high point complete with survey trig. Sidling around just below the trig, we had some magnificent views of Mt Meany, Ngamatea Station and – in the far distance – snow-clad Mt Ruapehu with adjoining Mt Ngauruhoe covered in cloud.

A short distance on, while walking close to the beech forest, we discovered a tarn full of water with old dead beech stumps protruding out of it – a most eerie sight.

At this altitude, we were exposed to the cool north-westerly wind and covered up a little more. The way ahead to Roberts Hut was not obvious, but a rock cairn indicated the route was somewhere down to our right. Dropping down into a valley, and beside a stream, we found the hut.

Roberts is a very old private hut, built with a frame of tree branches with aluminium cladding to the exterior walls and rubber sheet roofing. Inside, it has four bunks constructed of timber frames and sacking bases. A gas cooker, bench and food storage lockers complete the interior. A clear water stream flows down alongside the front of the hut, and there is a bridge across the river leading to a rudimentary toilet structure with plastic toilet seat and cover. Altogether, it would provide comfortable accommodation for its occupants. 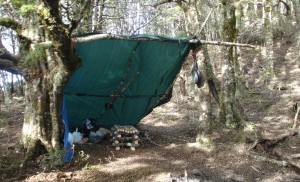 Lunch was enjoyed in the sun on the spur above the hut. Returning the way we had come, we discovered a hunter’s tarpaulin bivouac in an area of beech forest just short of Te Iringa. Water was trapped in the bottom end of the fly, and there were camping remains indicating it had recently been used.

We negotiated the greasy steep sloping clay pans, with one member deciding there was safety in sliding down on one’s bottom, and arrived back at the vehicles at 3 pm after a most enjoyable winter tramp in fine conditions.

A year in the life of a GuideOn June 3, Graham Leech gave a presentation at the club meeting … END_OF_DOCUMENT_TOKEN_TO_BE_REPLACED

A year in the life of a GuideOn June 3, Graham Leech gave a presentation at the club meeting … END_OF_DOCUMENT_TOKEN_TO_BE_REPLACED