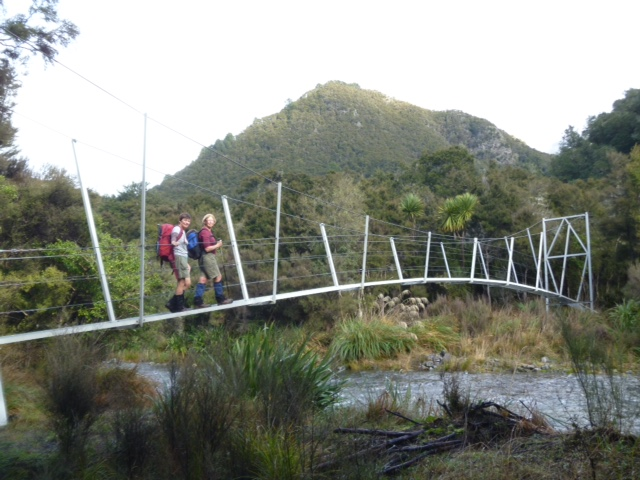 It seems insane to get out of a nice warm bed at 7am in winter to head for the wilderness, but that’s what we did. There were so many lunatics up early that morning, we needed the van and a car (which Hilary kindly provided).

There aren’t too many straight sections of road on the way to Te Puia via Puketitiri and only a few of us managed to snatch a nap. While the morning was fine, the temperature was quite low. Mist shrouded the valleys and initially limited some of the views. When we eventually caught glimpses of the Kawekas, it was evident that recent heavy snowfalls were in retreat, but still lingering in the gullies and on the tops. Once we had left the tarseal, the van reached the ford (which was easily crossed) and we began the steep climb to the saddle, where we discovered a number of other vehicles. Even more nutcases were out and about! 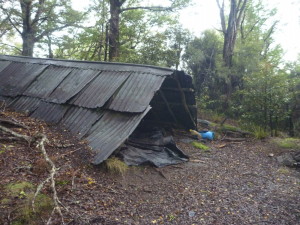 Members who planned to reach Te Puia via the Makino Track disembarked and chatted with two groups of people. One lot were hunters, who might have been irritated to find a group of noisy trampers about to traipse through their territory. But they didn’t show it and later we discovered they were rewarded when we spotted one of them carrying out the venison. The second were Deb and Dave Harrington. They were scanning for kiwis which had been released into the area and also clearing and resetting the predator traps which DoC had placed there.

By now, it was 0830 and those travelling via Makino set off up a fairly steep section of track, while the remainder took the lower route into Te Puia. The Makino group made their way through low scrub and a grass fairway until encountering kanuka that had grown to an impressive size. It is evident that tree felling and farming had once taken place around the area. As we progressed, the ground became undulating until it presented a more steady climb, intersecting various clay pans. By now, we were enclosed in the bush proper. One of the clay pans afforded views back to the north-east.

We eventually reached the Makino Bivvy, which was as rough and untidy as ever, but is always a good spot to stop for morning tea. By then we had caught up with Rosemary, who had gone ahead, while turbo-tramper Julia had raced off on a mission to the Gums and the nearby hot pool. We took the track down towards the junction with the Te Puia track. It descends steeply at one point through clay pans, with a sprinkling of loose rocks. We agreed that it could be a challenge and some recalled their trepidation the first time they encountered it. 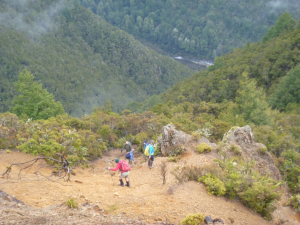 In the event, we negotiated it successfully and made our way down through a deeply rutted section where water had cut channels, to the track junction by the swing bridge. Jude, Juliet and Rosemary went up to the hot springs while Geoff, Hilary and I linked up with those who had gone to Te Puia Hut via the lower track.

During our leisurely lunch break, there was much talk about how cold it was at the hut. It seems the heating has been disabled and, given the lack of sun to warm it, we would not envy anyone staying overnight. The trip back out via the lower track is delightful, as it follows the Mohaka River. On this day, it was showing a good flow, due mainly to snow melt. We encountered a gaggle of young folk from Taradale High and their two teachers, on their way to that cold, unwelcoming hut. After the grassed area of river flats (Kiwi Flat, aka 20 minute flat), we tackled the zig-zag, uphill track towards the Gums. It always seems to be a tiresome climb and some of the party began to drift behind. 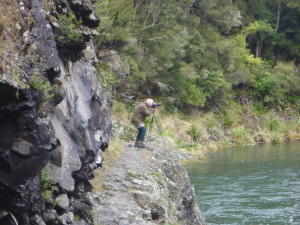 Shortly afterwards, the Gums came into view – and that always seems to spur people on. We arrived back to find another of our club members who had been exploring the more immediate surrounds and taking photos. Also there, refreshed from her spell in the hot pool, was Julia.

Special thanks to Ted Angove, our van driver.