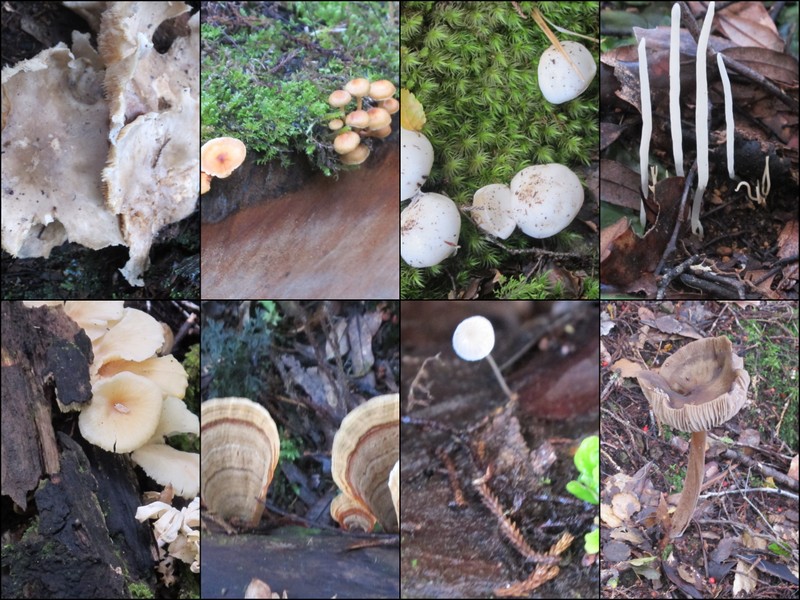 I just love being in this area amongst these awe-inspiring trees, so I was thrilled to be back again. We stayed at the Whirinaki Recreation Camp huts which have been recently refurbished with flush toilets, solar showers, and a covered outdoor eating area. What luxury!

After some confusion with hut keys, we finally headed out mid-afternoon for an easy walk. This was the H-Tree loop track which is only an hour’s walk but probably took us two, as we stopped so often to admire the many species of fungi and the huge native trees. Halfway round, we met the unusual H-shaped rimu tree. This was formed by a rimu tree branch growing into the trunk of a younger tree growing beside it. The trunk and branch rubbed together and grew into this shape. 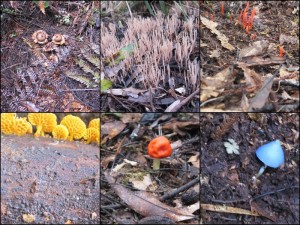 Plenty of firewood was available and thanks to Paul and Ted who cut lots up to keep the hut fires going. Everyone cooked their own meals, either in the hut or in the outside cooking area. Then we shared stories before an early bedtime.

The next day, we set off for Central Whirinaki Hut but had to change plans as we had a very late start due to dropping off the two bikers. So we walked towards the hut but turned off at the Whirinaki Waterfall and tramped that loop track. We followed the river most of the way, first coming across the spectacular Te Whaiti-Nui-A-Toi Canyon. Not long after that we spotted two whio washing and playing in the water. The forest bird life was abundant and the chorus was amazing. Throughout the day we heard tui, robins, kaka and kakariki. There certainly was plenty of food on the forest floor for the birds.

While we were eating lunch, overlooking the waterfall, a robin joined us for some time and enjoyed our bread scraps we fed him. Again, we were treated with a feast of fungi species and magnificent podocarp trees, rimu, totara, matai, miro and kahikatea.

A hot shower at the end of a tramping day was certainly an extravagance! 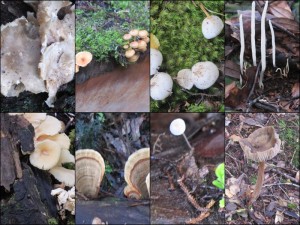 On day three, we all walked to Arohaki Lagoon – a two-hour return track. I was hoping to see the reflections of the tall kahikatea trees in the water and hear the frogs. But that wasn’t to be, as there was no water at all. We collected seeds for Ted off a fallen kahikatea in the middle of the ‘lagoon’ and I spotted a deer on the fringes, possibly grazing before our arrival.

This ended a very good weekend away, especially for four of us who hadn’t been on some of those tracks before.

Sparrowhawk bivvy, Ruahine Forest Park, Saturday 6 August 2022 Banner Photo: The view east, towards the Wakararas and beyond On a beautiful … END_OF_DOCUMENT_TOKEN_TO_BE_REPLACED

Prologue: The author was on the Whirinaki tramp, reported on this website under the headline 'We observe a mock turtle and the rodent of Upper Te … END_OF_DOCUMENT_TOKEN_TO_BE_REPLACED

Ruahine User Group A meeting was held on Monday 25 July, in the NZDA rooms in Dannevirke.  Julia … END_OF_DOCUMENT_TOKEN_TO_BE_REPLACED

Ruahine User Group A meeting was held on Monday 25 July, in the NZDA rooms in Dannevirke.  Julia … END_OF_DOCUMENT_TOKEN_TO_BE_REPLACED

Ruahine User Group A meeting was held on Monday 25 July, in the NZDA rooms in Dannevirke.  Julia … END_OF_DOCUMENT_TOKEN_TO_BE_REPLACED

Ruahine User Group A meeting was held on Monday 25 July, in the NZDA rooms in Dannevirke.  Julia … END_OF_DOCUMENT_TOKEN_TO_BE_REPLACED