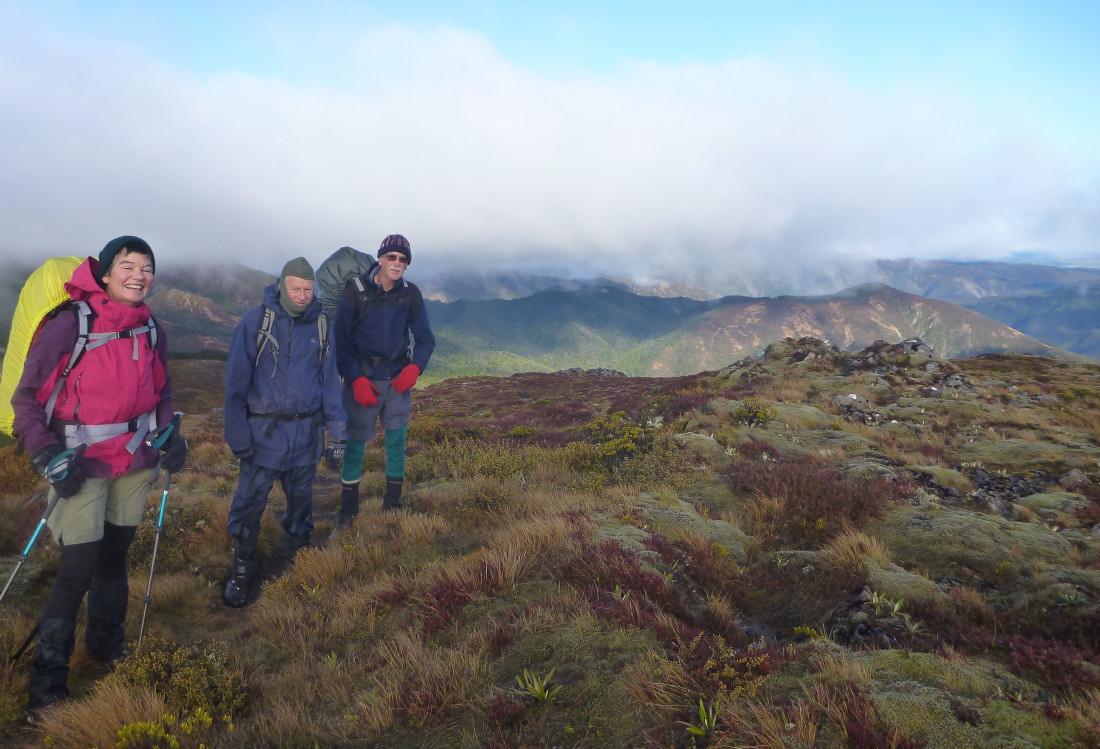 At the club meeting on Thursday night (before the Solstice tramp), it was suggested that as there were only four of us going on the weekend tramp, and all capable, we tramp to Kiwi Mouth Hut. The reasoning was that we would have plenty of time, because us weekenders would reach Kiwi Saddle before lunch on the first day.

On the Saturday, with gale force winds in the west, we decided to check out the Smith Russell track to Kiwi Saddle and if too windy, revise our plans. 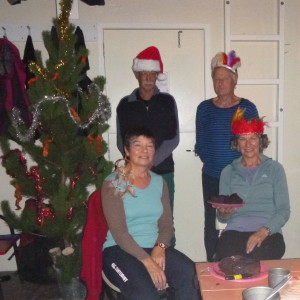 Christmas Tree and Chocolate Cake. Theme for the evening was Native American Indians

The Saturday day tramp party started behind us, and never caught up. The walk up to Kuripapango radio mast is easy, and was out of the wind. Near the mast, the track enters pinus contorta and it is an easy walk to the first lookout point which featured a rainbow over towards Te Iringa, where we tramped a month ago, and all the farmland and Kuripapango Camp Ground and the Ngaruroro River could be seen. The next high point along the track was our second stop, and windchill dropped the temperature quickly. We could see the final high point, and the track which follows the ridge line, with the pinus contorta just below it on the eastern faces.

At the Cameron Hut track junction, it took only 30 minutes to descend to Kiwi Saddle Hut. We could have flown it, if we had wings, because the wind on this exposed slope was strong. There was only slight moisture in the wind, so not as bad as we had all expected. 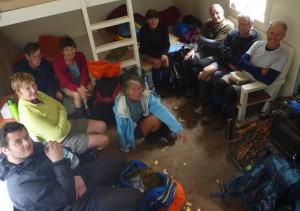 We arrived at the hut just before eleven and quickly got a hot brew on. Planning the afternoon, we decided that we needed to collect some firewood, as we would be using the dry stack in the hut. As we were having our hot drink, we spied trampers arriving. It was not until they walked into the hut that we realised that it was the day tramp group. Great, we had company for a short while.

They had their lunch and during it the rain started. We were glad we were staying put and, by the looks on their faces, they wished they were as well.

After they left, we scouted for the firewood and filled up ‘Monty’s Wood Store’ which used to be the old wooden box loo. Re-using it was a good idea, Monty.

Simon was tasked with finding a Christmas tree, not that hard to do with all the pinus contorta around. Conservation with a good purpose.

We then could have our own lunch and enjoy the afternoon. The wood stove soon warmed up the hut, and we were pleased that we had not gone down to Kiwi Mouth. We would have missed the day trampers, and Kiwi Mouth is an older hut with an open fire; it would have been difficult to heat. So all round, good timing and decisions. 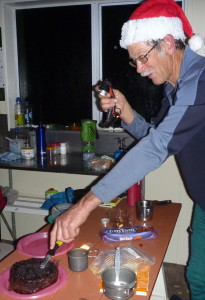 We decorated the tree with some tinsel and opened the bar at 3pm. That meant we could bring out our nibbles and tipples of choice. The major event of the afternoon was making the chocolate cake. This was an Edmonds cake mix, which we made up (eggs, butter and milk powder were added) and cooked in an oven bag in the billy. It’s cooked like a boil-in-the-bag mix.

Come early evening, we decided that the chocolate cake would be a good dessert – and it was yummy.

During the night, we heard kiwi screeching. So the hut is well-named.

In the morning, we were off up to Kaiarahi and out via Rogue Ridge. The wind had dropped, and with high cloud and occasional sunshine we aimed for Castle Camp for a hot brew and the remainder of the chocolate cake. The water tank and benches are handy for this kind of break. We were fuelled up ready to get up to Kaiarahi, and then head immediately for The Rogue. No stopping us now.

A final break just below the Rogue Ridge sign, and then we hared down. Crossing the Tutaekuri River was not difficult, boulder-hopping to save my best leather boots from water damage.

Then it was the final walk back to the car park, where we basked in the satisfaction of having done a round tramp, missing the bad weather. The western lower North Island had copped big rainfall, but it never reached us in the Hawke’s Bay.

Aranga Hut On Saturday 14 January the tramp was changed to a loop in the Northern Ruahine Range. … END_OF_DOCUMENT_TOKEN_TO_BE_REPLACED

Aranga Hut On Saturday 14 January the tramp was changed to a loop in the Northern Ruahine Range. … END_OF_DOCUMENT_TOKEN_TO_BE_REPLACED