NTC has celebrated each anniversary with a club tramp to Kaweka J, weather permitting, and will do it again on October 4. Current and former members are invited to celebrate the 40-year milestone, either on the tramp or at the club’s anniversary dinner – or both!

The dinner takes place on the evening of October 4 in the King George Hall, Hill Road, Bayview, starting at 6pm.

Contact Julia Mackie on email: julia@napiertrampingclub.org.nz or call 06 844 0540, if you would like to attend or find our more about the anniversary events. 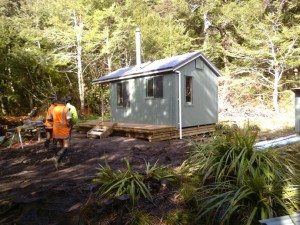 The new hut is now open. Situated only 25m from the old hut, it is an improvement on the old hut, and will be much warmer. Time to go and visit it. Maybe a trip up Sparrowhawk Ridge, and over the tops to it, would be great. A few more dayligbt hours will be necessary to do this trip.

Tell everybody uTRAMP!
Are you displaying the iTramp bumper sticker? The motif doesn’t replace the logo created in 1974, but is intended to promote the club. Stickers are available from Julia Mackie, and business cards from John Dobbs. Let’s show ourselves off to the world!

Sparrowhawk bivvy, Ruahine Forest Park, Saturday 6 August 2022 Banner Photo: The view east, towards the Wakararas and beyond On a beautiful … END_OF_DOCUMENT_TOKEN_TO_BE_REPLACED

Prologue: The author was on the Whirinaki tramp, reported on this website under the headline 'We observe a mock turtle and the rodent of Upper Te … END_OF_DOCUMENT_TOKEN_TO_BE_REPLACED

Ruahine User Group A meeting was held on Monday 25 July, in the NZDA rooms in Dannevirke.  Julia … END_OF_DOCUMENT_TOKEN_TO_BE_REPLACED

Ruahine User Group A meeting was held on Monday 25 July, in the NZDA rooms in Dannevirke.  Julia … END_OF_DOCUMENT_TOKEN_TO_BE_REPLACED

Ruahine User Group A meeting was held on Monday 25 July, in the NZDA rooms in Dannevirke.  Julia … END_OF_DOCUMENT_TOKEN_TO_BE_REPLACED

Ruahine User Group A meeting was held on Monday 25 July, in the NZDA rooms in Dannevirke.  Julia … END_OF_DOCUMENT_TOKEN_TO_BE_REPLACED