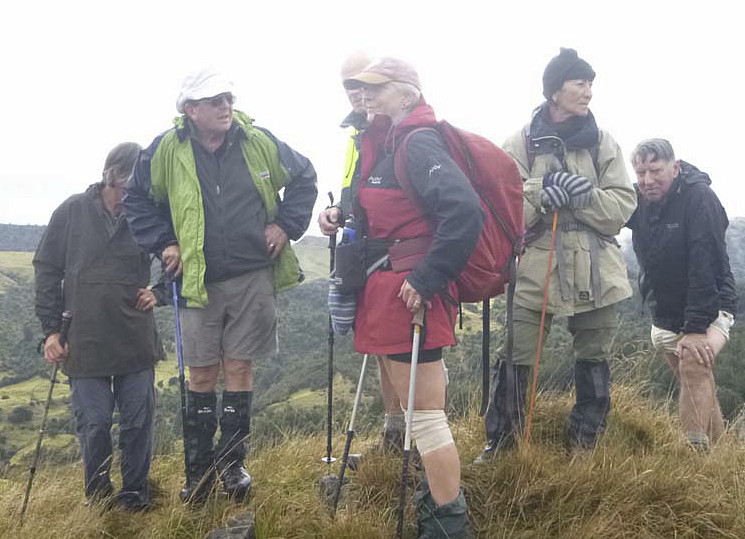 Twelve of us met at the Church Road winery and Colin drove us north to the Pan Pac kiwi-raising sanctuary. It was an overcast day. The birdlife was noisy, with sightings of kereru, piwakawaka, ducks, tuis and bellbirds. I hoped to see a baby kiwi but they were all asleep, somewhere safely in the reserve.

Time for a break?[/caption]The walking was easy but care did have to be taken not to slip in places. We gradually made our way uphill, and out of the sanctuary, across a sheep paddock and into Thomas’s Bush, another reserve.

Morning tea was at the top.

On the way down, we met the Napier Amblers coming up, 24 of them out doing the same loop as us.

We had lunch in the shelter by the little lake and then drove to Bellbird Bush Scenic Reserve.
John and Vic did the shorter walk whilst the rest of us went up to Spooners Hill to see the views. I came back the same way and the others walked on to the other road end.

The route is different from the Topo map and brought the group out at the corner of Pohokura Road and the other turn-off. We were all home by 4pm.

Mackintosh Hut/Rogue Ridge, Kaweka FP, Saturday 17 September 2022 Banner Photo: The leaning sign at the top of Mackintosh Spur It was a sunny, … END_OF_DOCUMENT_TOKEN_TO_BE_REPLACED

Shine Falls, Local, Wednesday 7 September 2022 Banner Photo: Group selfie and the falls Nine of us set off on a very frosty morning from Park … END_OF_DOCUMENT_TOKEN_TO_BE_REPLACED

A-Frame to Stanfield Hut, Ruahine FP, Saturday 3 September 2022 Banner Photo: At the A-Frame Hut We had a full vanload booked to do this trip. … END_OF_DOCUMENT_TOKEN_TO_BE_REPLACED