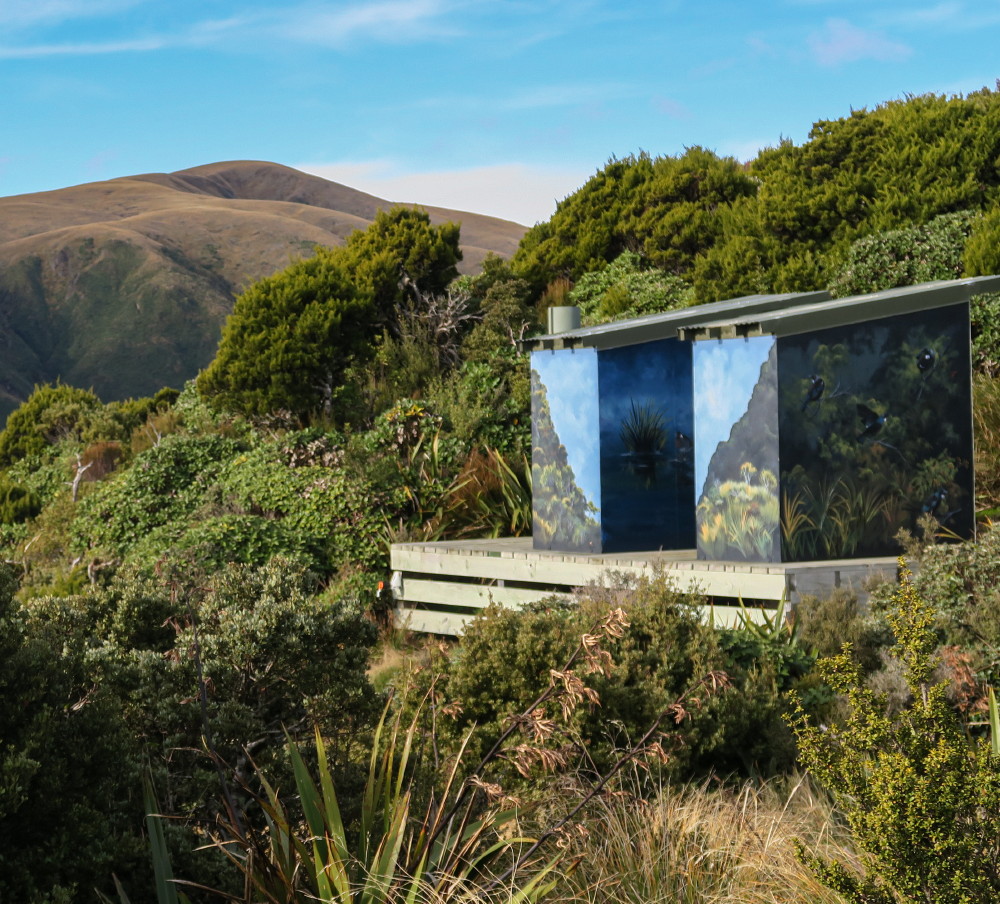 The Brown Sugar Café (Ray Slavin’s second tramping hut) was calling us as we approached Taihape, where we enjoyed a coffee before heading to Renfrew Road car park and the start of the tramp. Everyone gasped when we saw the number of cars and hoped they were day trampers.

Nine of us in total, and with Rangiwahia there were options to reach the hut. Three chose the harder Deadman’s route, five of us chose with Juliet following later in the day. This report is of the walk up the easier benched track to the hut, which takes 2-3 hours. It was a gentle steady grade and we regrouped often to delayer as the sun warmed us up. Although this was a new tramp for two members, the club has been to this hut several times, in sun, rain, flood, snow and for solstice.
The track zig-zagged around the old slip and then took a series of steps to skirt around the outside of it. 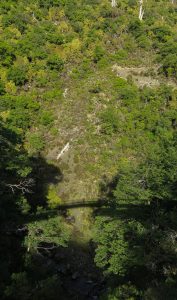 As we approached the gorge, you could see the beautiful arched wooden bridge (opened by Helen Clark in 1988 when she was Minister of Conservation). These days the bridge is dwarfed by the bush, but the gorge is still picturesque. It certainly deserves a photo. Throughout the whole tramp, there were a lot more groups of steps than we could remember, up and down – some desperately needing refilling with soil.

Between the beech trees you could get small glimpses of the rolling hills and farmland, and views all the way to Ruapehu. The grade became a little steeper once over the bridge and the shrubs become smaller. We met keen returning trampers who told us that the hut was terribly busy with already six beds claimed. We all had our mats so were not too worried.
We reached the small waterfall which has been recently bridged and knew that the hut was another five minutes away. 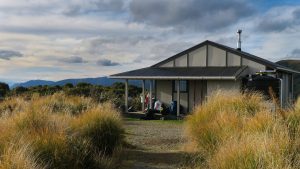 The hut sits above the bushline on the tussock-covered tops and is renowned for its ski history. There are skis attached to the outside walls to remind us of when they once skied the slopes behind the hut. A local artist has brightly painted the woodshed and toilets with native birds. It is worth a visit just to see these buildings.

People everywhere! It was obvious that there were more bodies than beds and it was only 1pm! We managed to secure a bed each and saved one for the other three through some kind young people who chose to sleep on the floor and in a tent.

The view of Mt Ruapehu

It was a beautiful winter’s day, sitting in the sun eating our lunch with stunning views over to the snow-covered Mt Ruapehu. However, by 3pm, the temperature quickly dropped, and soon we were sitting in front of the log burner.

Several small groups of trampers arrived and we lent our mats to them. Mid-afternoon, a group of ten schoolkids and adults from Levin arrived with no tents or mats, and the inn was already over-full. As the day ended, others came by the hut and because of the numbers decided to return; others decided to move on to Triangle Hut, another three hours away, which was a blessing for us.

We managed to fill in time until bed at 8.30pm when the schoolkids quickly and noisily moved into the hut and somehow found a sleeping spot on the floor. Then four more trampers arrived and were stunned to find no room at the inn. After they cooked a meal, they managed to squeeze somewhere on the floor. I didn’t hear anything during the night, but believe the level of snoring, the stuffiness of the hut and people awkwardly stepping over sleeping bodies to make toilet trips kept people from our group awake. There were more than 30 in the hut that night and a few on the deck. 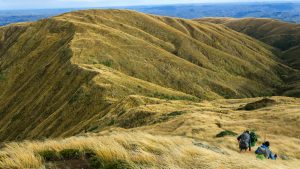 Heading to the Mangahuia highpoint from the junction

You can imagine the scramble in the morning, moving around sleeping teenagers as we made breakfast. At 8am, we set off up to the high point Mangahuia at 1583m where we had 360-degree views. It was gusty at times while we were walking over the tops. Although the tops were covered in tussock, you had to watch out for the leatherwood and spaniard scattered throughout. We gradually made our way up and down muddy trenches, through some rooty bush then a steep descent to the car park.

The Deadman’s Track took us nearly four and a half hours. Back to Brown Sugar in Taihape for lunch, then a long drive home.