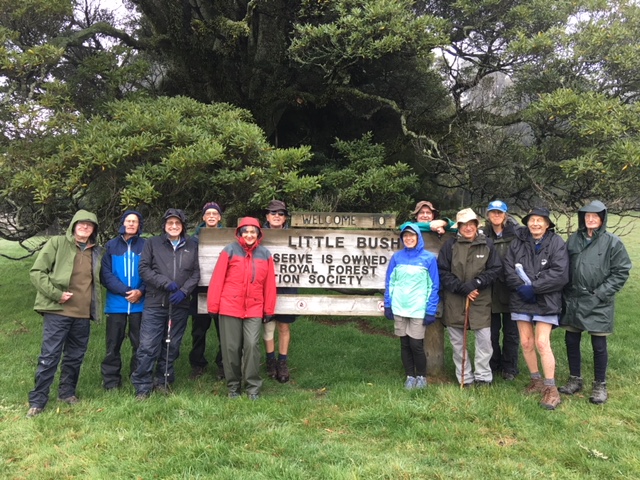 We woke to a misty cold day and the road to the Blue Gums was still closed. So Plan B was actioned, with a wander around the local Puketitiri reserves and an early shared lunch.

First stop was William Hartree Memorial Scenic Reserve which was donated in 1962 to Forest and Bird along with the old Biological Research Station which can be booked for public use.

Those who can ski fared the best on the slippery downward slopes of the loop track and Vic, our leader, was on hand to identify the trees.

Next stop was Little Bush, which meant we did get the van off the tar seal. John Marshall was in charge here, but he must have rushed in beforehand and labelled all the fauna and flora because there were numerous name plaques. What a great job he did! John also explained about the big onga onga they had removed for us.

There were some impressively big trees, especially one huge rimu and lots of smaller trees coming on plus new ones that have been planted by Forest and Bird. This is an excellent example of mature and regenerating bush. 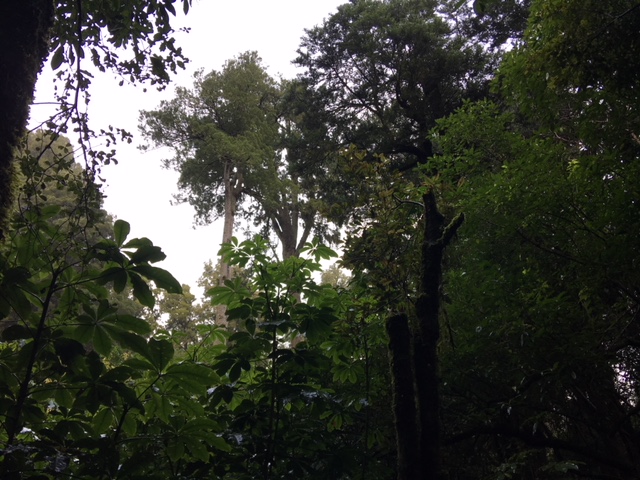 Next was Balls Clearing, where Ted and Paul were in charge; off we went on a wheelchair track. Here, there are lots of Kahikatea or white pine, New Zealand’s tallest forest tree amongst other large trees but not the same regeneration as at Little Bush.

The Balls Clearing road shelter proved a problem because although it looked nice, the misty rain was everywhere – including all over the seats; so the vote was for a dry lunch spot. In came Plan C, lunch at the DoC base (thanks for their kind permission).

What a nice array of food – all kind of treats were on offer, including a fruit and vege cake. After that, an early return home to stoke the fire.

Aranga Hut On Saturday 14 January the tramp was changed to a loop in the Northern Ruahine Range. … END_OF_DOCUMENT_TOKEN_TO_BE_REPLACED

Aranga Hut On Saturday 14 January the tramp was changed to a loop in the Northern Ruahine Range. … END_OF_DOCUMENT_TOKEN_TO_BE_REPLACED