On the drive in, we passed a group camping at Ball’s Clearing. This was a portent of the trip. Four of us headed off from the Middle Hill car park, along with the day party also going our direction, in good weather.

After a brief stop at Middle Hill Hut, we all continued up Camp Spur to Whetu, meeting two trampers coming out from Ballards Hut. They assured us that they had had the best day on Friday. Above the bushline, we joined the day party for lunch in the open away from the protection of the bush, even though there was a cool breeze. Julia was not feeling well so she turned back with Ted’s assistance (Ted carried Julia’s rather heavy pack. Was it 19kg Julia?) 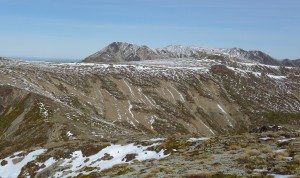 At Whetu, we all stopped for photos, but we could see cloud building up north of the Kawekas. We met a further group of three trampers, heading down Makino Spur, and another two on their way to Ballards Hut; they had come from Tira via Rocks Ahead and said there were three trampers from Hutt Valley TC (HVTC) who were probably going on to Mangaturutu Hut. Looking back, we could see a party of seven or eight who appeared to be following us. The place was crowded! 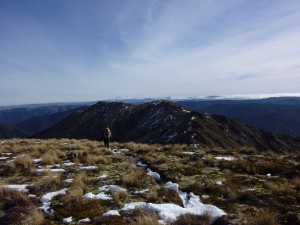 Previously we had discussed whether we should stay at Ballards Hut as per the original plan or go on to Tira Lodge. The latter choice was deemed the best, as it would mean that we would not be out in the open when the weather turned bad the next day. We decided to continue on to Tira Lodge. The tramp is not too difficult except for the last bit, where you have a short steep climb out of the saddle.

We arrived at Tira Lodge at about 4.15pm. Empty,.. Wow. DoC had done a bit of work recently. There were new concrete pads below the deck and under the stove, and a new tap mounting on the water tank. The hut was very clean and tidy. Also a good pile of firewood, possibly cut up by chainsaw. Alison got the fire going, and the billy was on when eight trampers from Vic Uni tramping club (VUTC) arrived. They incuded Keiran, a fellow club tramper’s son. Jude was in the day party; she and Keiran must have missed each other by about an hour at Whetu.

On Sunday, the forecast rain arrived – not heavy, but the wind was quite strong. We headed off about 8.30am across the saddle to Mangaturutu Hut. There are fewer bumps going in that direction. Once out on the open tops, you could feel the strong wind, pushing you off your feet. 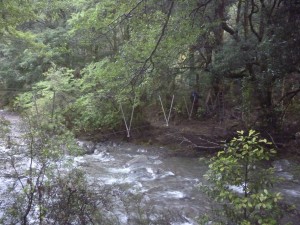 At Mangaturutu Hut, we had a longer food stop as we were not sure whether we would find a good lunch spot. Off again. A change to be going down from Mangaturutu. It’s much easier this direction. We descended to the three-wire bridge across the Makino River. Once across the bridge, we had some lunch.

The track follows the river’s true right and then heads up a spur. The light rain became heavier. We were passed by all of VUTC. Their plan had been to go down the Makino River to Te Puia, but they decided against it due to potential rising river levels after the overnight and continuing rain. Two VUTC guys stopped and asked us for directions. They didn’t have a map. They knew they were going to Te Puia but the sign said Makino one way and Ballards the other. Not good preparation, perhaps…

Onwards along a relatively level track through beech forest with many horopito (pepper) trees. We arrived at Makino at about 3 pm. There were three HVTC in residence plus eight VUTC swirling about. Thank goodness VUTC were all going on to Te Puia.

We settled in. Some of HVTC had been at Granity Pass and Wangapeka area when we were there in January 2010. What a small world it is. At about 4 pm, more VUTC turned up. They had come from Ballards and had taken all day to get to Makino. High winds out in open meant they had to hang onto each other for support. They went on to Te Puia to join their friends.

At about 6 – 6.30pm, more HVTC arrived in the dark, head torches going, looking rather wet. They had come from Rocks Ahead, following us via Tira and Mangaturutu. One was over 70 years old! We re-arranged ourselves to make room.

Next day HVTC got up at 6am and set off at first light. As two of their medium group were struggling, Alison suggested they walk out with us and she could drive them to a suitable pick-up point. As they had arranged to stop at DoC Puketitiri on the Friday night, we agreed to drop them off at the same place.

We got up in the daylight and set off at about 8.30am, pointing out the delights of the Makino Bivvy, the views of Mohaka River and farmland across the river and arriving at the main car park after about 2 1/4 hours. Unfortunately, we had to change in the rain.

On the way back to Napier, we stopped at Julia’s to see how she was, enjoy scones and coffee and discuss the weekend.

It had been a good trip – a great day on Saturday, and we managed to avoid most of the bad weather on the following two days, all due to the sound decision-making on Saturday to tramp through to Tira Lodge and thus minimise the open top tramping on the wetter and windy days.

A few days later, we got an email from a member of HVTC thanking us for the ride.

Sparrowhawk bivvy, Ruahine Forest Park, Saturday 6 August 2022 Banner Photo: The view east, towards the Wakararas and beyond On a beautiful … END_OF_DOCUMENT_TOKEN_TO_BE_REPLACED

Prologue: The author was on the Whirinaki tramp, reported on this website under the headline 'We observe a mock turtle and the rodent of Upper Te … END_OF_DOCUMENT_TOKEN_TO_BE_REPLACED

Ruahine User Group A meeting was held on Monday 25 July, in the NZDA rooms in Dannevirke.  Julia … END_OF_DOCUMENT_TOKEN_TO_BE_REPLACED

Ruahine User Group A meeting was held on Monday 25 July, in the NZDA rooms in Dannevirke.  Julia … END_OF_DOCUMENT_TOKEN_TO_BE_REPLACED

Ruahine User Group A meeting was held on Monday 25 July, in the NZDA rooms in Dannevirke.  Julia … END_OF_DOCUMENT_TOKEN_TO_BE_REPLACED

Ruahine User Group A meeting was held on Monday 25 July, in the NZDA rooms in Dannevirke.  Julia … END_OF_DOCUMENT_TOKEN_TO_BE_REPLACED