The day started (and ended) with a grey, cloudy sky. The views were going to be minimal unless the cloud lifted. We walked in hope.

The tramp required permission from the station, and we were able to park 200 metres from the start which required crossing the Mangataramea Stream. Simon made the wrong choice and ended up getting wet legs. Luckily he had merino leggings, which kept him warmer despite the soaking.

The route sidles through native bush with some large trees and many young rimu and totara. The trail was slippery and was at times a funnel for water running down from the hills. 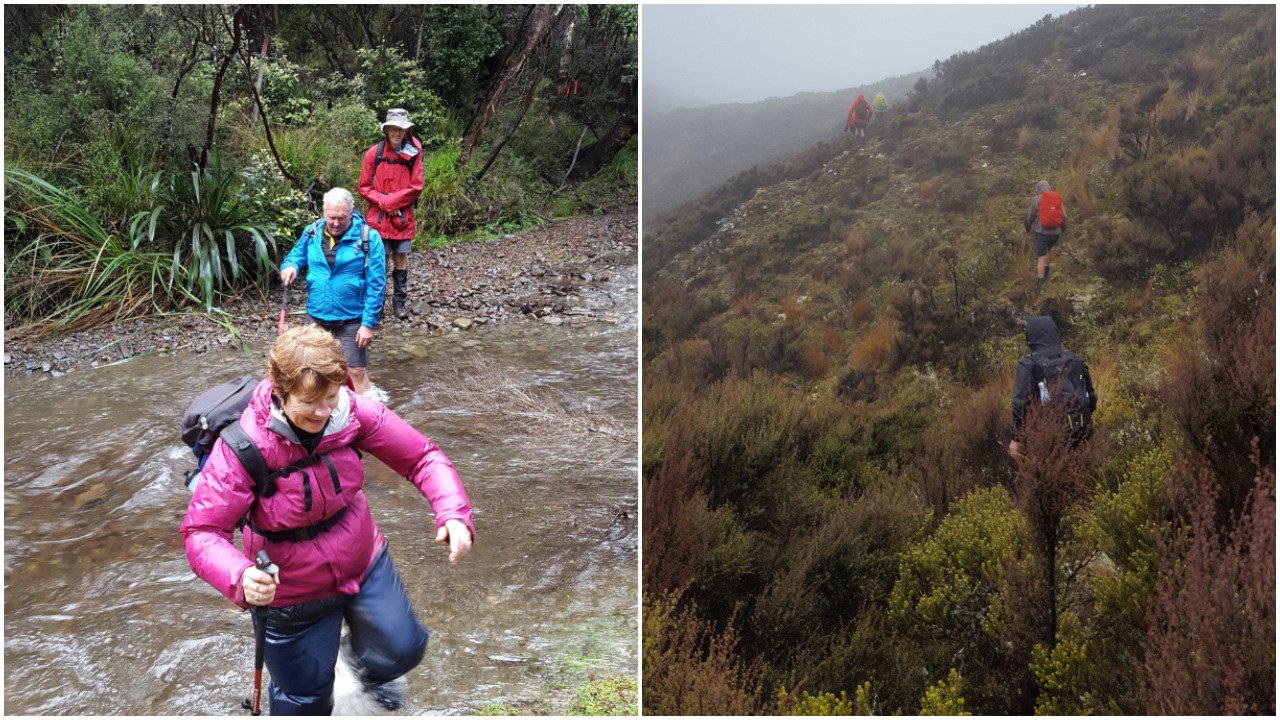 Once the small climb begins, the vegetation changes to kanuka but this – although overgrown – has been kept clear and marked by hunters who use the route. Several trails led off it, so keeping sight of the high points helped navigation. We did lose the route once, but soon regained it. I tied a few more markers around the kanuka to ensure we could find our way back down.

Once the high point 1106 on the Tahuhuni Range was reached, we were more exposed to the wind and the slight drizzle. Overtrousers keep the wind chill down, and are an important clothing requirement whatever the weather. Those of us who had them donned them quickly. 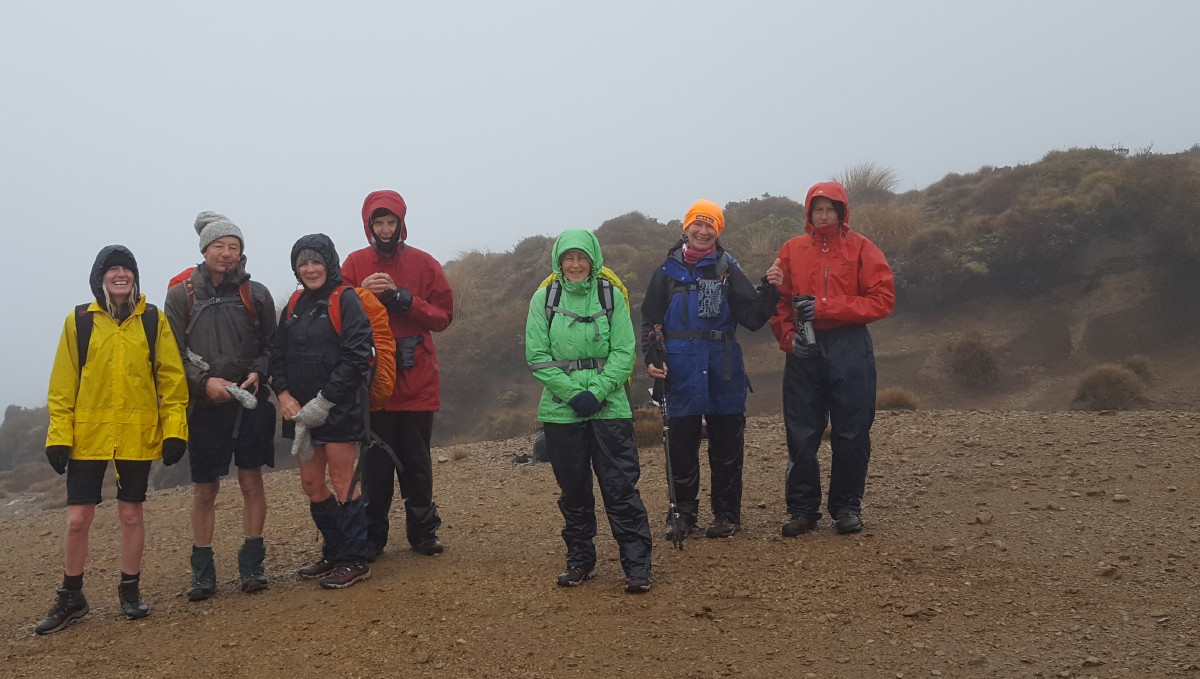 The group photo at The Yards thanks to Shona

Once we reached the 1200 contour, some of our party decided that the private hut was a warmer option. Simon guided them to it, and they were able to keep dry and warmer whilst the rest of us carried on to the Hogget.

No views, but once we reached ‘The Yards’ – which are at the Hogget (1287) and where Shona took the group pictures – we headed back to the private hut. 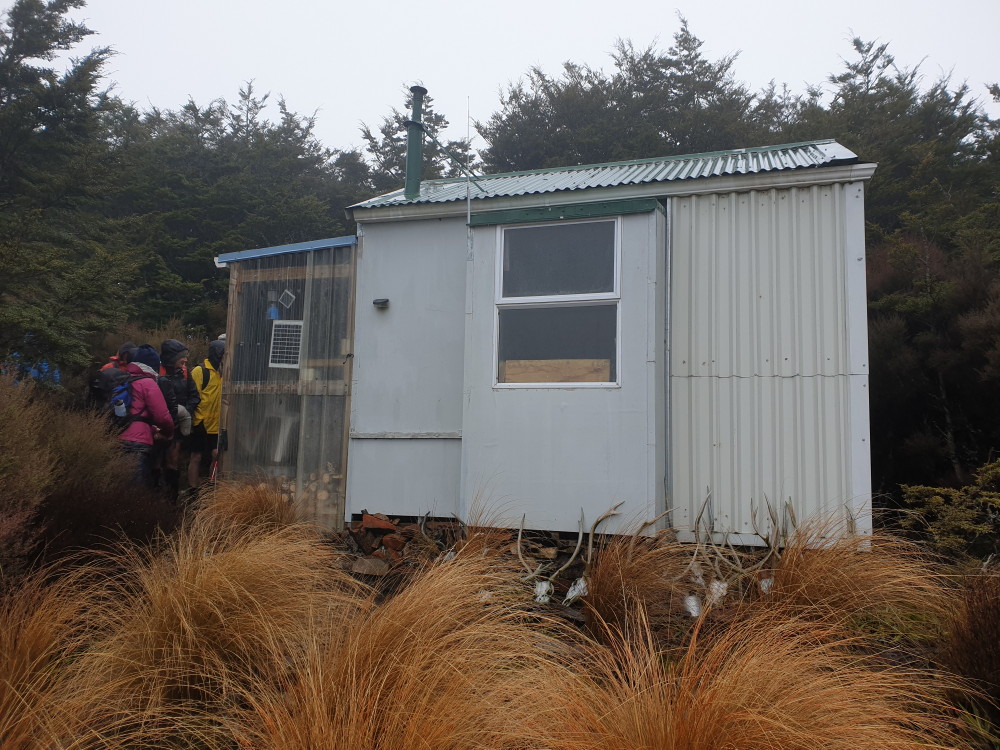 We had a quick lunch and then everyone returned to the vehicle the way we had come – apart from Simon’s slight detour which meant backtracking for a few minutes once he realised we were on the wrong ridge. The station was now visible below the grey cloud.

The return walk was pleasant, once we were back in the bush, under cover and out of the wind. Time to savour the regenerating bush again. We were back at the van at 2.30pm, but no complaints because the weather had not been kind to us and we had no views. We can reschedule this tramp and hope for better conditions.

Aranga Hut On Saturday 14 January the tramp was changed to a loop in the Northern Ruahine Range. … END_OF_DOCUMENT_TOKEN_TO_BE_REPLACED

Aranga Hut On Saturday 14 January the tramp was changed to a loop in the Northern Ruahine Range. … END_OF_DOCUMENT_TOKEN_TO_BE_REPLACED