Middle Hill and The Three Gorges was the intended trip but, as the weather looked pretty good and fining up, the decision was made to try for Whetu instead. We had a vanload of 11 day trippers along with four for the weekend circuit in Alison’s car. After a lot of recent rain, we had checked with the local farmer that it would be OK to cross their bridge – and a wise move it was, as the creek was running muddy and swift. There was already one car parked just in front of the ford.

So we headed off from Makahu Road around 8.30am, all more or less together. Ray and Gossie intended to hole up at Middle Hill Hut only. John Gray (welcome home) and Gordon also decided that would be enough for them. Morning tea at Middle Hut and there were four hunters in residence. In fact, we were to encounter several other groups or pairs of hunters during the day too. Interestingly, the door to the loo at Middle Hill has a heart-shaped cutout! 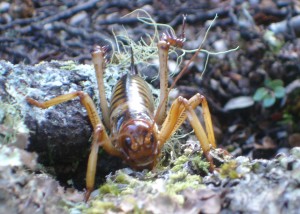 The track up Camp Spur was good and the climb meant we shed the layers. I saw a weta just beside the track, and took the photo opportunity. We emerged into the open before the final climb onto the range and Whetu. As it was midday now, we found a few hollows out of the cool breeze and enjoyed lunch with a view. Within minutes, the weekenders joined us, but Julia (who was part of them) was making heavy weather of it, so decided to head back down to Middle Hill with Ted. 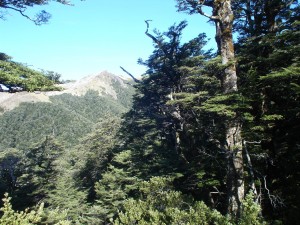 The wind was quite bitey now as the ‘tight five’ (Jude, Marc, Matt, Wade and myself) plodded steadily up. The views all around on the tops and particularly out to Ruapehu were spectacular, so the usual photo session took place. We had a long way to go so did not linger here, saying goodbye to the remaining three weekenders, and carrying on south towards the actual peak of Whetu in a biting wind and a thin layer of cloud. There was a light dusting of snow, nothing more. Just as we were about to turn left and begin the descent of Ihaka Spur, we met up with a contingent of Auckland Uni trampers.

Ihaka Spur is a bit gnarly in places; we did a slight zigzag and regularly referred to the map. At least the clear conditions made navigation easier. Finding the entrance into the bush lower down took a bit of time and lucky spotting by Marc of a tree marker in the distance helped a lot. It was a relief to finally be in the shelter and safety of the bush again and on a well-marked track. We now tried to make up a bit of time, and literally jogged down to Middle Hill Hut in record time.

Here we had a very short break, noting the hunters were still there with another group setting up tents outside. From there, it was just retracing our steps along the tedious track back to Makahu Road and again we really set a cracking pace, making it back to the van in 1h 15 m, arriving at 5.15pm. Darkness was rapidly descending, but we were all back safely with the others waiting patiently.

A very good trip overall, 20.75 kms long according to Wade’s technology and a solid workout.