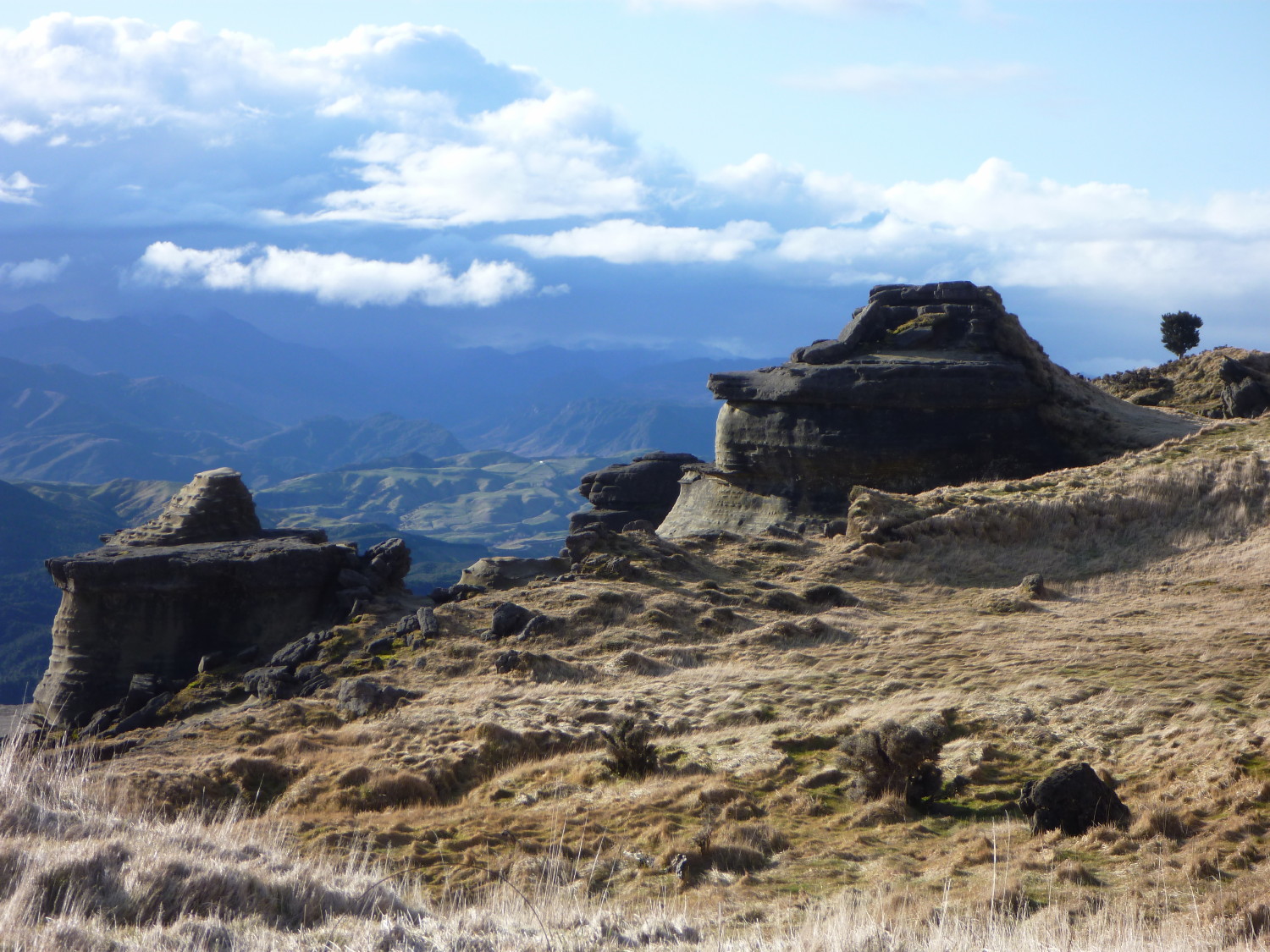 A cold and dark start to the day ended with a dark evening. We arrived at Titiokura Summit on the Napier – Taupo Road at 7.30am. This was the earliest we had started for some time, but we did not have far to travel from Napier. We started tramping at 7.45 with a slight threat of rain, so the raincoats came out. The wind was also cold. The forecast southerly was passing through. There were patches of snow around. 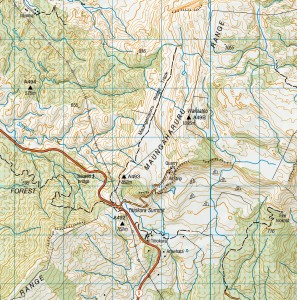 We had the kind permission of the local farmer to cross his land and make our way up to the Maungaharuru Range. This is on a farm track initially, and at the shed by the quarry, we took the left farm track heading north-west. We soon reached a point where decisions needed to be made as to where we leave the farm track; however, the visibility was difficult. Out with the GPS, and the old topo map. None of us had the new Topo50 map of the area. Thus the settings on the GPS had to be changed back to the old mapping system. We figured out where we were and thought that we were about 1km off our direction. We were heading for the basin at the bottom of the high point Ahuateatua (1271). 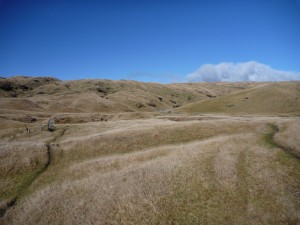 The weather improved and we at last could sight the range and basin. The landscape looks like Central Otago here with low hills intersected by gullies. The weather had cleared and the sky became blue, with even a wintry sun. We had to search for a way through to get to the basin, passing the remnants of a farm building. We needed to head east to get through, otherwise we would be bushbashing up and down more gullies. At last we came to the tributary of the Esk River. This proved to have a lot more water than normal, and the girls baulked at jumping across. We developed a means whereby the packs went over first, then we leapt across, trying to grab some grass to keep ourselves from falling back into the stream. A bit of a palaver really, that cost us time. 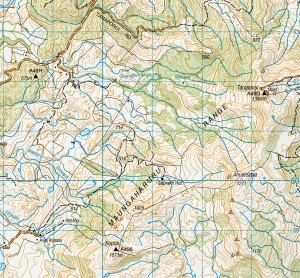 From here we could see the farm track we needed to get onto. At 12.30, after a delayed lunch, we could see Taraponui and Galbraith Hut down below. We had great views of the Kaweka Ranges and Kaimanawa Range, with Makorako clearly visible. To the immediate west lay Te Kooti’s lookout, and the north radio mast on Taraponui and the escarpment. What a wonderful view from up here.

After lunch, Paul, Ted and Sue Titter decided that they would go down to Galbraith’s Hut. Paul was not feeling so good. The rest of us continued around to the saddle, and up to the radio mast at Taraponui. We reached it at 2pm and made a mobile phone call to Alison to confirm that we were going to be a bit later that expected, should anyone be concerned.

From the radio mast, it is a straightforward walk along the roadway, when the escarpment becomes visible again. A deviation from the road to Bell Rock is required, but we managed that with good navigation and we could see the farm track to use. 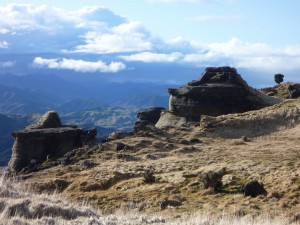 At 3.30, we reached Bell Rock and met up with Colin, who had kindly driven the van to collect us and had a small walk. From here, it was an hour back to the van, through bush. We all appreciated the change after walking on farmland all day. The bush is very dense, and there were some treefalls, which hampered progress; we were glad to reach the van at the end of a long day’s walk, 8 3/4 hours in total.

We drove around and picked up Paul, Ted and Sue, who had walked out to the Brooks Road/Waitara Road junction. We reached Napier back in the dark, and none of us complained after a full-on day of walking. I’m betting that we all slept well that night.

Contents: NTC AGM is on Thursday May 5th. There will be supper after the meeting. Club Meeting … END_OF_DOCUMENT_TOKEN_TO_BE_REPLACED

Contents: NTC AGM is on Thursday May 5th. There will be supper after the meeting. Club Meeting … END_OF_DOCUMENT_TOKEN_TO_BE_REPLACED