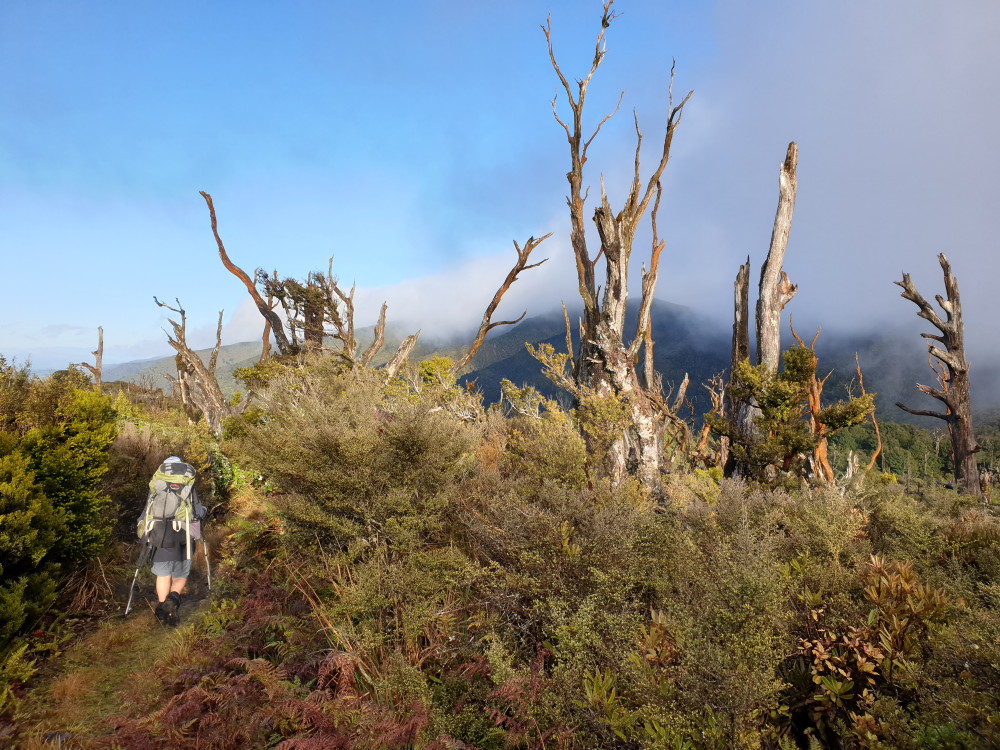 The walk via the Holmes Track to Stanfield Hut, and then on to Cattle Creek, takes about four hours. To make the day more interesting, I wanted to revisit the A-Frame Hut, to check out progress on the work being done there, then drop down to Stanfield and carry on to Cattle Creek. I last did this route in July 2010.

The walk up to Takapari Road is a 600m climb through podocarp forest and then leatherwood near the tops. Early on, it became evident that the higher we climbed, the muddier the track became. We were protected from the light drizzle but it was still cold on reaching the road. 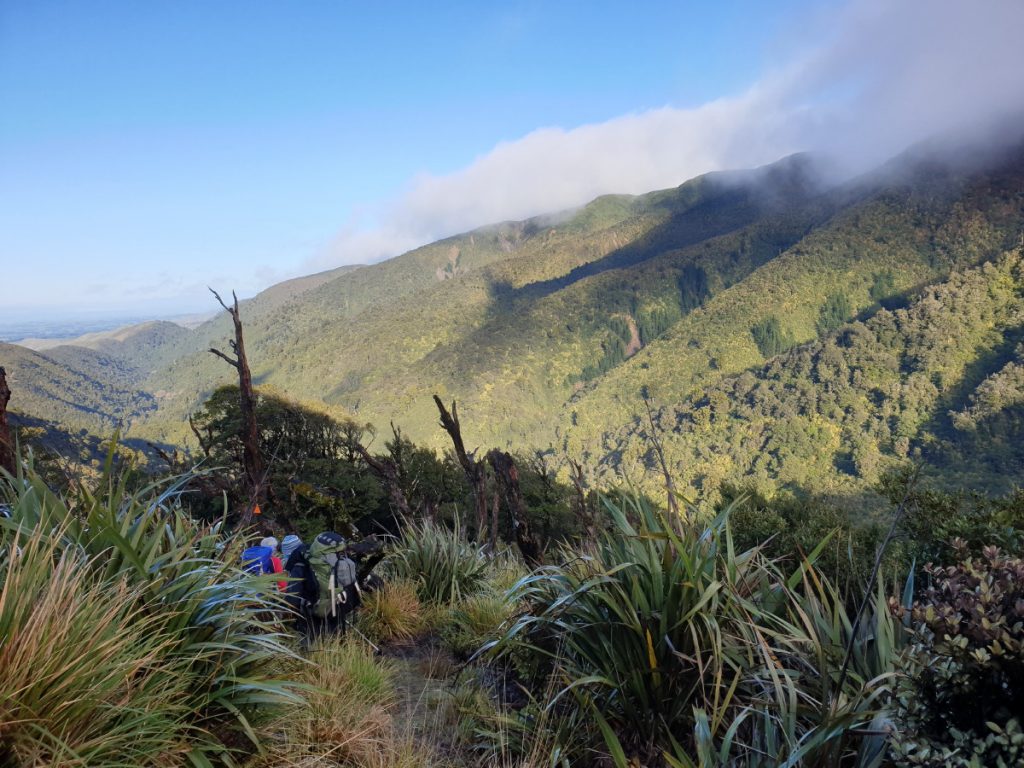 Heading down from Pt 908 to the Tamaki West Branch River

Takapari Road is the only all-access public road which goes right up to the tops in the Ruahine Forest Park. The New Zealand Forest Service constructed the road in the early 1970s to allow access for planting, and it remains a popular road for mountain bikers and four-wheel-drive enthusiasts. There are fantastic views from the tops; on a clear day, you can see all the way to the coast. We could only just get glimpses through the clag.

A community agreement has been signed with DoC by a Maori interest group to renovate the A-Frame. On completion of the hut works, it will be renamed Te Ao Tupare. On reaching it we saw building materials ready for the maintenance. As reported in the minutes of the 2 March RUG meeting, the exterior walls had been scraped down – and inside, the ceiling and part-way down the walls had been painted. A lot of rot in the walls needed repair before installing a new roof. I think that Covid-19 scuppered their progress. 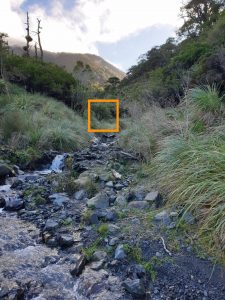 We snatched a quick snack inside and then continued on to Pt 1170, where the DoC track to Stanfield Hut begins. An old track which is no longer maintained is signposted and still shown in Topo50, but we continued through the leatherwood and mud, heading north-east. The track then turns south, with an old sign indicating 45 minutes to Stanfield Hut. At this point, another track used to carry-on north to summit Takapari, but it too is no longer shown on maps or maintained. Alison remembers going there with Vic Bullock many years ago.

The steep descent to Stanfield turned into a mammoth task, trying to stay upright on the greasy track. I took two falls, but luckily not much damage was done. We had lunch at Stanfield, chatting to a couple who were staying there overnight and struggling to light the fire with wet wood.

Heading upstream, we reached the track taking us up to the ridge and Pt 908. The large orange triangle is there so we took the track, crossing a seriously eroded section. I had heard about the start of the track being re-routed, and saw the new track just past the tricky section. We decided on our descent to take this new track and found that it was 50m up from the old start. It is marked by an orange-painted pole, and signposted once you reach it. Once past Pt 908, the track undulated along the ridge until reaching the Cattle Creek Hut turn-off. The hut is clearly visible from the ridge. The wind was not a problem, as a hunter we met had predicted. 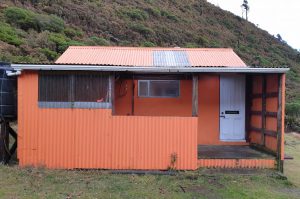 We dropped down to cross Cattle Creek which is a tributary of the Pohangina River, and up to the hut. Dorothy and Elly, who had taken the Holmes track to the hut, had arrived there at 1.30pm. They had been busy collecting and sawing up wood and got the wood burner going. The hut was certainly starting to warm up when we (four of us) arrived at 3.00pm.

The usual routine followed: settling in and getting a hot drink and a billy on the stove. The wind continued and during the night the chimney flue rattled constantly. We all wondered what to expect the next morning. But, as Elly predicted, it abated around 7am.

The walk back up to the ridge is short and sharp, and as we walked along the sky cleared and we could see all the farmland on the east and the range on the west. We found the new track which makes the final descent to the Tamaki West River easier.

The view across to main Ruahine Range

After a quick snack at Stanfield Hut, we went on downstream to find the Holmes track. Once on the 4WD track, we checked to see which ridge we had taken the previous day up to the A-Frame. 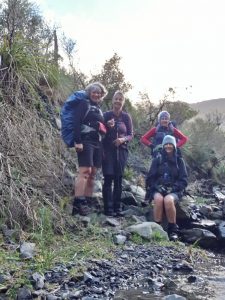 Four of us heading home

Aranga Hut On Saturday 14 January the tramp was changed to a loop in the Northern Ruahine Range. … END_OF_DOCUMENT_TOKEN_TO_BE_REPLACED

Aranga Hut On Saturday 14 January the tramp was changed to a loop in the Northern Ruahine Range. … END_OF_DOCUMENT_TOKEN_TO_BE_REPLACED