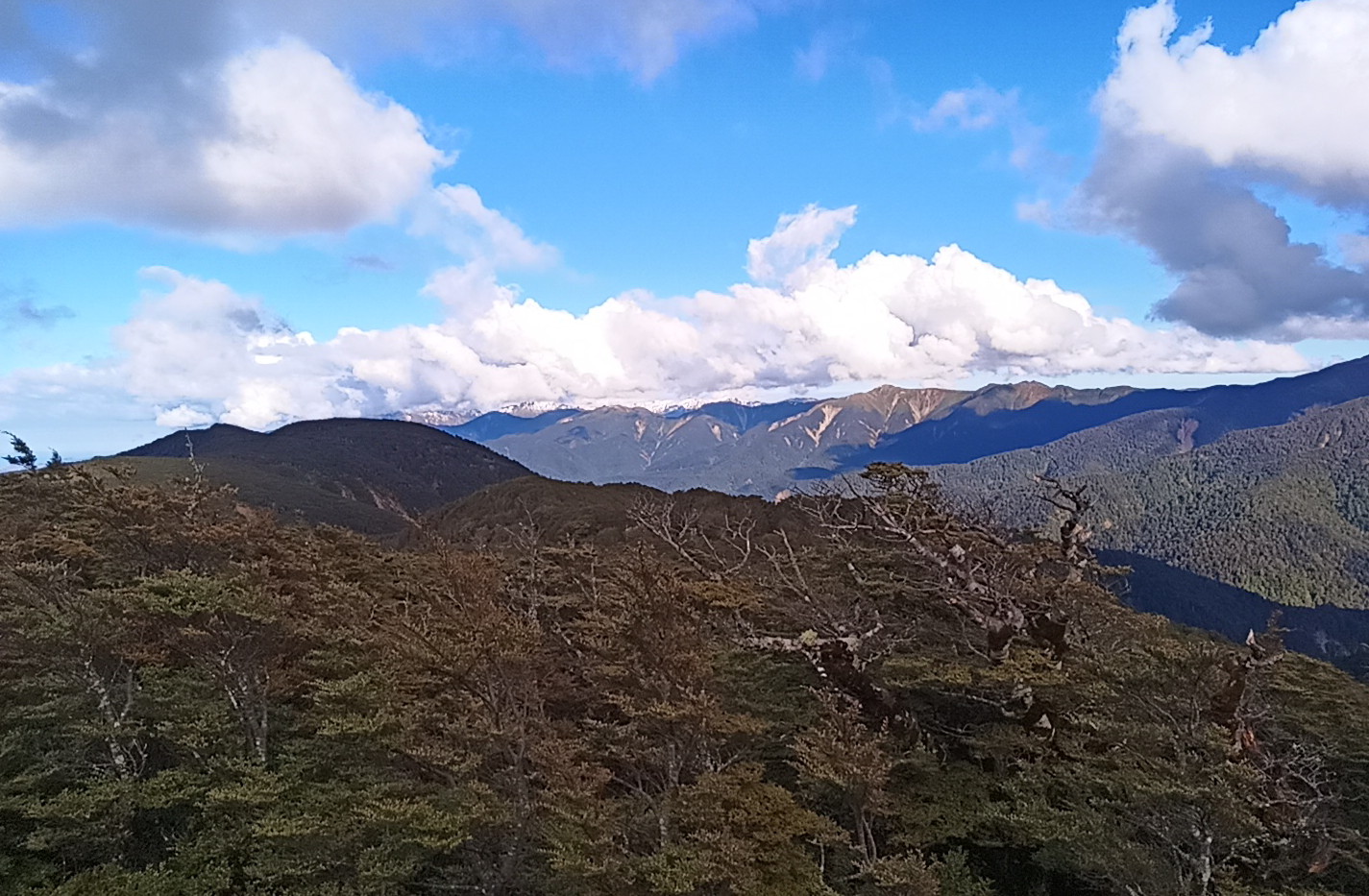 For those of you who don’t know what the gastrocnemius is, just ask anyone who has walked to Parks Peak Hut via Sentry Hut and Pohatuhaha ridge which part of their body hurts.

The tramp was a repeat from almost exactly one year ago and I was tempted to cut and paste that report.

However, there are some minor differences. Despite a foggy morning in Napier, the air cleared to a beautiful blue sky as we reached Kereru Road. It turned out a gloriously fine but cool winter day, ideal for tramping. That walk up the hill is tough. Some hands and knees scrambling is required in parts, to overcome lack of traction on the slippery slope. I wiped the sweat from my eyes, only to cover them in mud. So when Rosemary slid backwards into me, I couldn’t see her coming but I did hear her giggling just before impact.

Once we reached the ridge junction, five of the ten trampers took the short detour north to Pohatuhaha trig for some 360 degree views. The rest walked on for 40 minutes to Parks Peak Hut, stopping at the ‘red chair’ viewpoint. We had clear views of Mt Ruapehu. 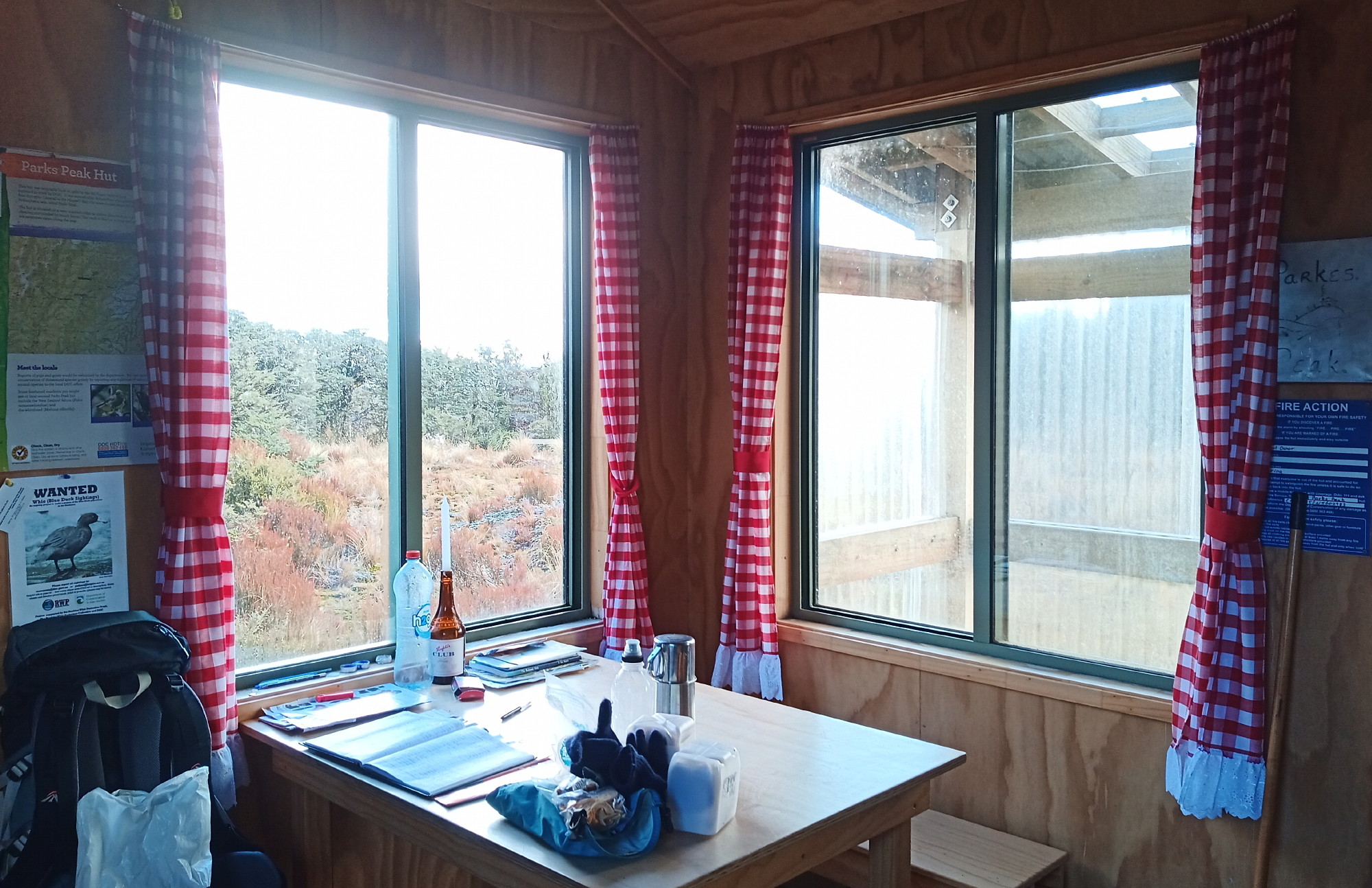 The homely addition of curtains

The hut is in beautiful condition with colourful curtains featuring lace bottoms. Whoever made and hung these has done a fantastic job. From all Parks Peak Hut users, thank you. Gossy was not slow in starting the fire. He needed to do this to warm his sandwiches. We all enjoyed the warmth as well, because by now some cloud had moved over and chilled the air.

After lunch, Julia took us to the start of the track where it descends to the Upper Makaroro and pointed out the geographic features. This gave me a good sense of perspective. Many bivvies, ridgelines and huts in the Northern Ruahines were put into context as we looked north-west and south.

Julia also gave us a lesson in resetting the DoC 200 pest trap. We (well, Simon and Rosemary), had earlier opened and disposed of the rat inside. We all have no excuse now for not checking, emptying and resetting these traps as we walk the tracks. We should add a No. 2 screwdriver to our tramping kit, to easily open the trap doors; cheap at Mitre 10.

The walk back home was a pleasant stroll. Just one or two of us had muddy bottoms at the end.

Thanks to Juliet for organising, leading, and driving us.

Editor’s note: The gastrocnemius muscle (plural gastrocnemii) is a superficial two-headed muscle that is in the back part of the lower leg of humans. It runs from its two heads just above the knee to the heel, a two joint muscle. (Courtesy Wikipedia)

Aranga Hut On Saturday 14 January the tramp was changed to a loop in the Northern Ruahine Range. … END_OF_DOCUMENT_TOKEN_TO_BE_REPLACED

Aranga Hut On Saturday 14 January the tramp was changed to a loop in the Northern Ruahine Range. … END_OF_DOCUMENT_TOKEN_TO_BE_REPLACED