Sixteen of us gathered at Park Island on a very chilly Wednesday morning, usual departure time 7.30 a.m. After several days of torrential rain and freezing temperatures, we were on alert for the cancellation of this tramp, but the rain stopped on Tuesday night.

Driving along State Highway 5, we could see the Mangaharuru Range with cloud-free tops and snow, and a south-west wind; the light cloud around was moving, so we knew it would be windy and cold at the top. Just before the Mohaka Bridge, we turned onto Waitara Road, then a short drive along Brooks Road where we parked the vehicles. We had the required permission to cross Waitara Station and were packed up and ready to go by 8.40. 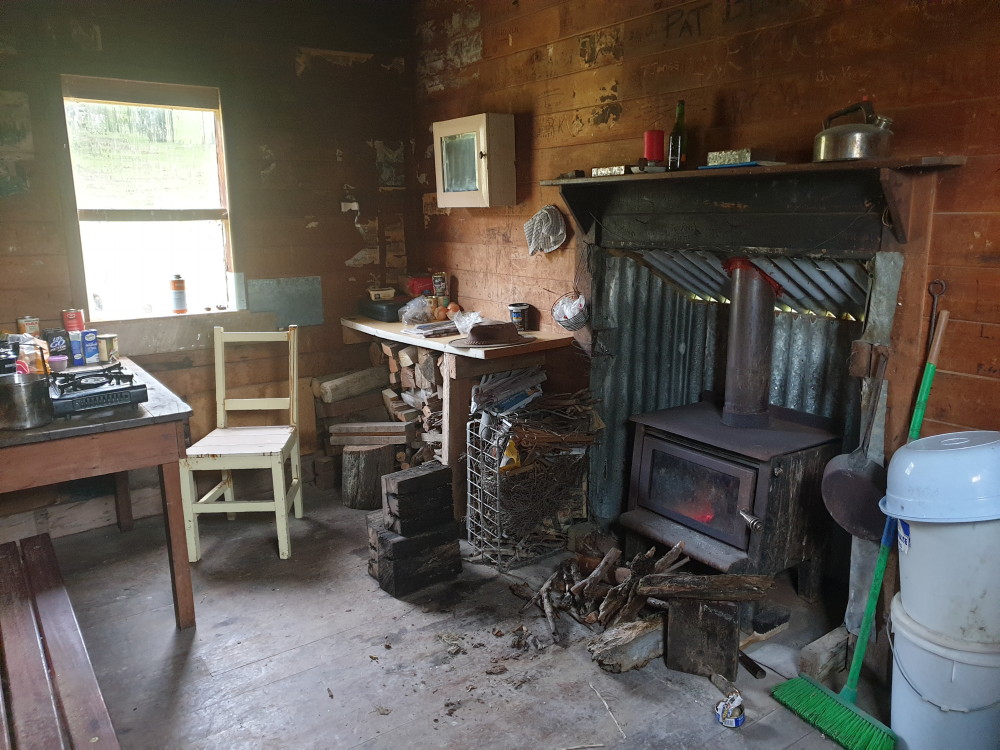 The cosy interior of Galbraith Hut

First stop, Galbraith Hut. This was a first for quite a few of us, myself included. Although I have been to Taraponui several times, I had never made a visit to this quaint, historic hut. It’s a fairly easy walk to Galbraith Hut along farm tracks, passing a group of Shetland ponies and a rather large flock of turkeys, all the while looking up at the snow-covered tops of the Mangaharuru and the Taraponui trig, where we were heading.

We reached the hut within an hour and could see smoke coming out of the chimney, so we knew it would be quite cosy – and we weren’t disappointed. A hunter had stoked the firebox with chopped-up rail sleepers before heading out himself. 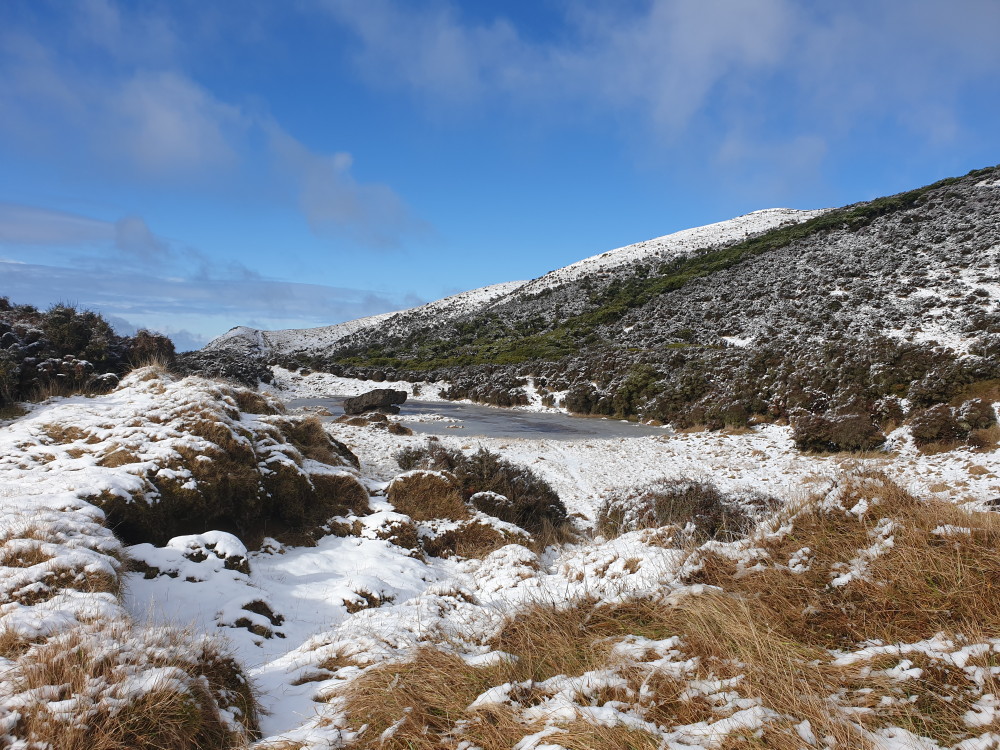 The tarn on the saddle

We had a fairly leisurely snack and hot drink, then it was time to leave the cosiness of the hut and head back out into the brisk, fresh air, layering up first and knowing there would be layers on, layers off for most of the tramp up.

Eleven of us continued on up to the communication towers, while the remaining five were going to slowly make their way back to the vehicles. 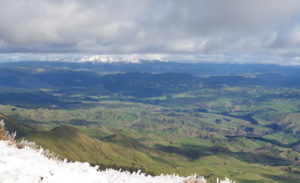 The view towards the Kaweka Ranges

It was a steady steep climb. The height of the trig looks quite daunting when looking up at it. We stopped often to enjoy the views out to the snow-covered Kaweka Range. The snow accentuates the immenseness and ruggedness of the range. It looked magnificent. As we tramped higher, we split into groups, joining up at various points.

Some areas were quite muddy and slippery because of the previous days’ heavy rain and where there were puddles, they had settled into hard black ice, so care was needed.

Looking out east, we could clearly see Napier’s Bluff Hill and Lake Tutira. 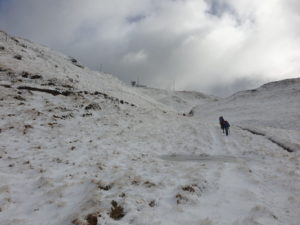 Heading up through snow to the mast

As we ascended, we met the snow; not much at first, but becoming deeper the higher we climbed. Thick layers of ice had frozen on the fence wires and posts, so extra care was needed when swinging a leg to get over these. Many of the tarns were completely frozen over, although neither of us were keen to test how thick it was. 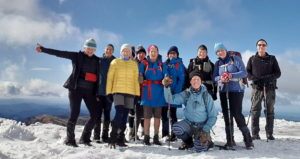 The selfie after lunch at the mast

Ominous grey snow cloud had started to come in from the south-west, so we wanted to get to the Taraponui top before conditions deteriorated. We finally reached the cell tower and communications shed at 12 o’clock and enjoyed a fairly leisurely lunch, sheltering from the chill breeze. Many large shards of ice were falling off the tower.

Heading down, we stopped to enjoy the views as far as Mount Tauhara near Taupo, although cloud in the distance obscured parts of the Central Plateau. The grey cloud we saw moving in on our way up was moving at quite a pace as we headed down, so we all wanted to make it back to the vehicles before cold rain set in.

We were back at the vehicles just after 3pm (where the first five were waiting patiently), just in time to beat the showers.

On our return trip to Napier, looking back at the Mangaharuru Range, the snow cloud had completely covered the tops where we had been less than an hour before.

This is a great tramp, whether it be in the hot summer months or winter, when you get to encounter snow.

Thanks go to Alison for driving the van and John D for providing and driving his vehicle.

Sparrowhawk bivvy, Ruahine Forest Park, Saturday 6 August 2022 Banner Photo: The view east, towards the Wakararas and beyond On a beautiful … END_OF_DOCUMENT_TOKEN_TO_BE_REPLACED

Prologue: The author was on the Whirinaki tramp, reported on this website under the headline 'We observe a mock turtle and the rodent of Upper Te … END_OF_DOCUMENT_TOKEN_TO_BE_REPLACED

Ruahine User Group A meeting was held on Monday 25 July, in the NZDA rooms in Dannevirke.  Julia … END_OF_DOCUMENT_TOKEN_TO_BE_REPLACED

Ruahine User Group A meeting was held on Monday 25 July, in the NZDA rooms in Dannevirke.  Julia … END_OF_DOCUMENT_TOKEN_TO_BE_REPLACED

Ruahine User Group A meeting was held on Monday 25 July, in the NZDA rooms in Dannevirke.  Julia … END_OF_DOCUMENT_TOKEN_TO_BE_REPLACED

Ruahine User Group A meeting was held on Monday 25 July, in the NZDA rooms in Dannevirke.  Julia … END_OF_DOCUMENT_TOKEN_TO_BE_REPLACED