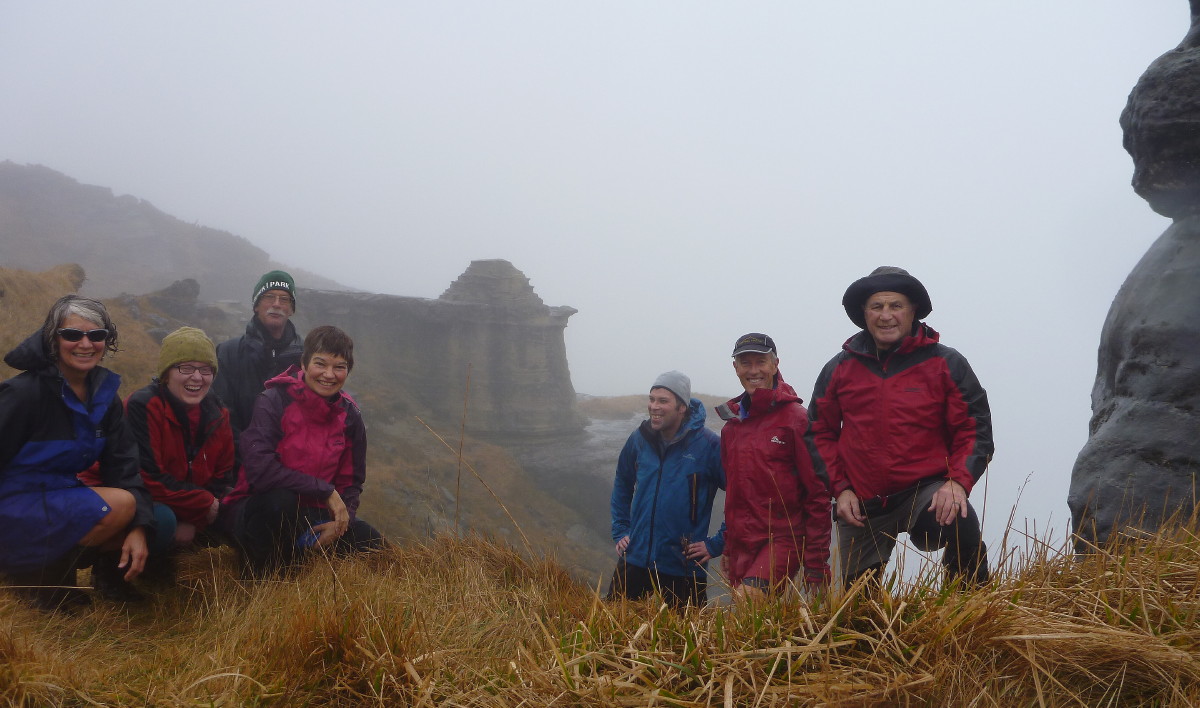 The planned route: Pohokura Road, up to Boundary Stream and the Mainland Island Opouahi. Beyond is a loop walk to Bell Rock. Beyond this, heading south, is Taraponui, and then over farmland (permission required) to link to Titiokura Saddle on the Napier Taupo Road.

Given the poor weather, we only scheduled the walk to Bell Rock and Taraponui and return. In the event, we only got to Bell Rock. The drizzle as we left Napier was not a problem. We all wanted to get outdoors and this walk is through bush, before reaching the first of two stiles which take the track through exposed tussock grassland. There was no evidence of animals or any wetas in their high-rise apartments, especially built for them. But loads of rabbit poo. We made it to Bell Rock in one hour and took the group photo. Balancing the camera’s “gorilla” on top of a movable day pack was a struggle, as was reading the camera menu for the timer through misty sunglasses.

However, we had fun and spent a short time exploring the Bell Rock, which is formed from limestone. As there is no shelter, we decided to flag the walk on to Taraponui. We had none of the views down to the Mohaka River that are, on better days, fabulous from this walk (see our July 30 2011 report – A day of difficult navigation)

We retraced our steps and then decided to walk back to the van via the loop which took us along the new Boundary Stream predator fenceline. An information panel explains the Poutiri Ao o Tane (Maungaharuru Sea-Bird project). The project is led by DoC and the key partner organisations involved are the Aotearoa Foundation, Hawke’s Bay Regional Council, Landcare Research, ECOED, Landcorp, Maungaharuru Tangitu Inc, Ngati Pahauwera, Ngati Hineuru, Tutira Maungaharuru Vision Group, Te Matau a Maui (Cape Sanctuary) and the local conservation community. It is aimed at bringing native flora and fauna back into the lives of the local people. Its current focus is on Cook’s petrels and their re-introduction to Hawke’s Bay.

The farm track ends up back on Pohukura Road, 300 metres from the van’s parking spot. We had been walking for only 2.5 hours.

Ted had returned before us, not going all the way to Bell Rock, and had noted the steady increase in rainfall since his return to the van. We decided to decamp to the Boundary Stream shelter for our longer snack break.

With the rain showing no sign of a let-up, we called off the extra walk around the Boundary Stream tracks, changed into dry clothing and headed back to Napier, to disperse and have our lunches elsewhere.