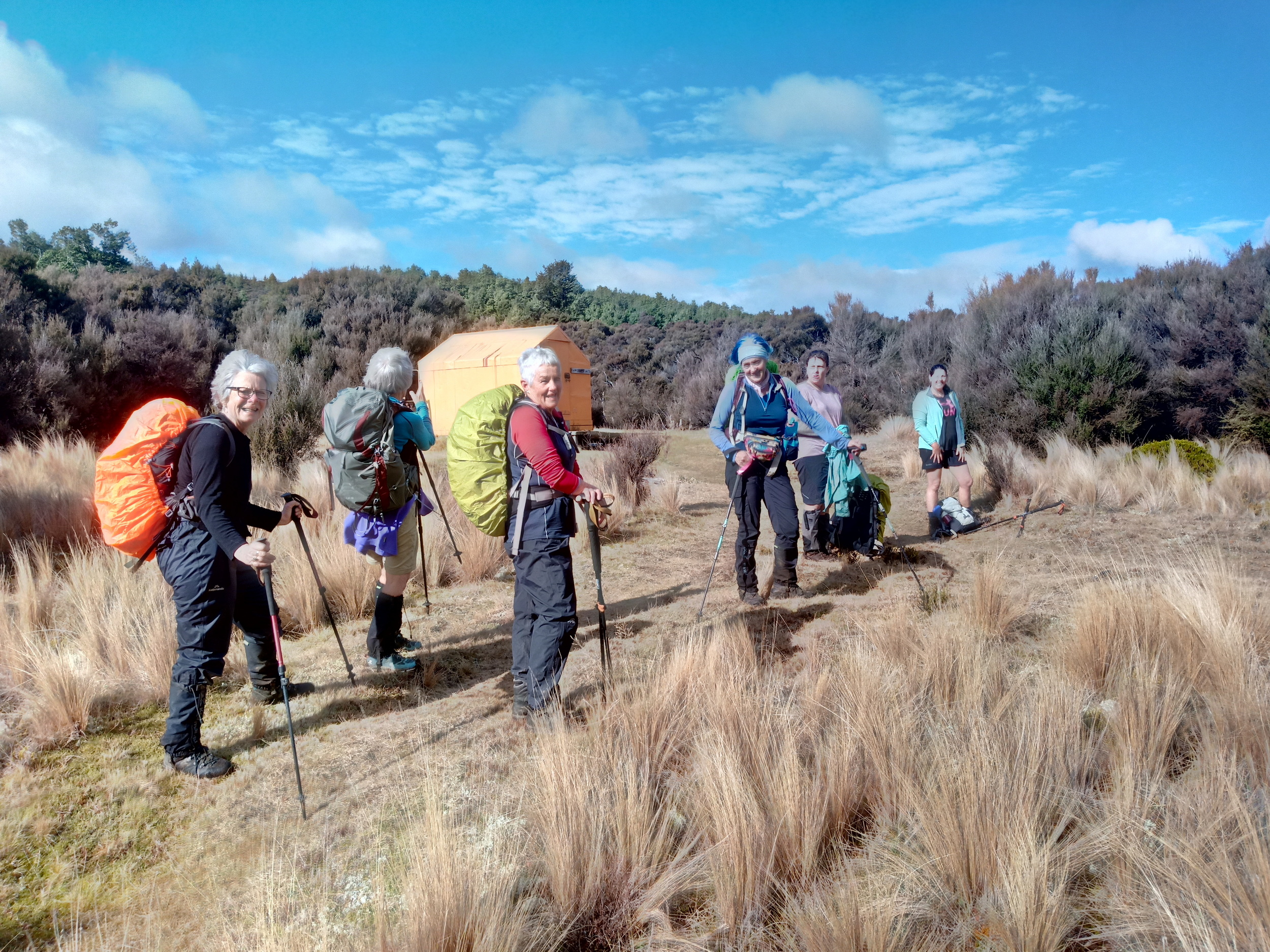 Prologue: The author was on the Whirinaki tramp, reported on this website under the headline ‘We observe a mock turtle and the rodent of Upper Te Hoe’, Anne being the ‘turtle’ and Simon the ‘rodent’.

As a newcomer to the Napier Tramping Club, I approached the tramp with trepidation. The club trips I’d undertaken to date had provided ample and painful proof that years of slothful living had destroyed any pre-existing tramp fitness I fancied I might have had. I had also learned that Napier Tramping Club members needed strength of character, a sense of humour and a thick skin if they were to survive encounters with mock turtles and rodents, as I had bravely done during the Whirinaki overnight trip. Things could only get better! 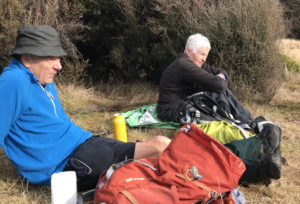 Bruce and Alison have a smoko

Our tramp began at the usual Park Island meeting spot. The group of  seven gathered in overcast conditions for a briefing by tramp leader Bruce, who outlined a plan change due to recent heavy rain, from Makahu Saddle – Middle Hut to Makahu car park – Iron Whare.

Bruce apologised while we all discussed the shorter distance, less arduous climb and extended lunch break we would have to endure. We resigned ourselves to the inevitable and set off for Kaweka Forest Park in a positive frame of mind, the group split between Bruce and Alison’s cars.

Time passed quickly in Bruce’s car as we were entertained by Lynette with extracts from her many tramping and non-tramping adventures. Highlights included a night in a Tongariro mountain hut with 30 soldiers (including a chef) and the thrill of having Bruce’s car abruptly stop on a steep hill due to thick ice during a previous trip to Makahu Saddle. We learned how superb driving skills by Bruce, much verbal encouragement and hand-waving by Lynette and the use of a shovel saved the day, with the car sliding gracefully downhill to a turnaround area from which they made a rapid get-away. 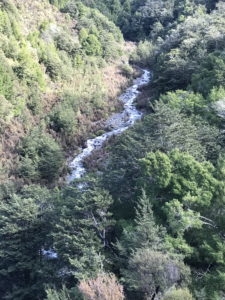 Beautiful stream, but we handled them with care

Around 9am, we set off from Makahu car park in light drizzle, dressed in multiple layers against the expected wind and rain. Within an hour, most of us had removed our outer layers and the sun was shining. The winter light playing on the beech trees and fallen branches covered in mosses and lichens littering the forest floor was a magical sight. And if we needed a reminder of our unique bush’s fragility, that was present in the form of large number of DoC traps lining the side of the track.

The streams we crossed were equally beautiful but required careful maneuvering as they were slightly swollen and flowing swiftly. As a novice to river crossing (and fearful of another mock turtle performance), I was grateful to Bruce and Jenny who provided a helping hand (or stick) along with valuable advice. I safely traversed them all without incident other than wet feet.

After the demanding climb and intrepid stream crossings, we all agreed an early smoko in the sun at the Kaweka Flats Bivouac was in order. It would set us up for the stressful extended lunch at Iron Whare. It also enabled us to regroup, as post-covid fatigue was proving a significant challenge for some.

While we were at the bivouac, Mark Jenkins appeared carrying a pack and spade; he was doing some track maintenance and we should look out for the steps he had just built a little further on. 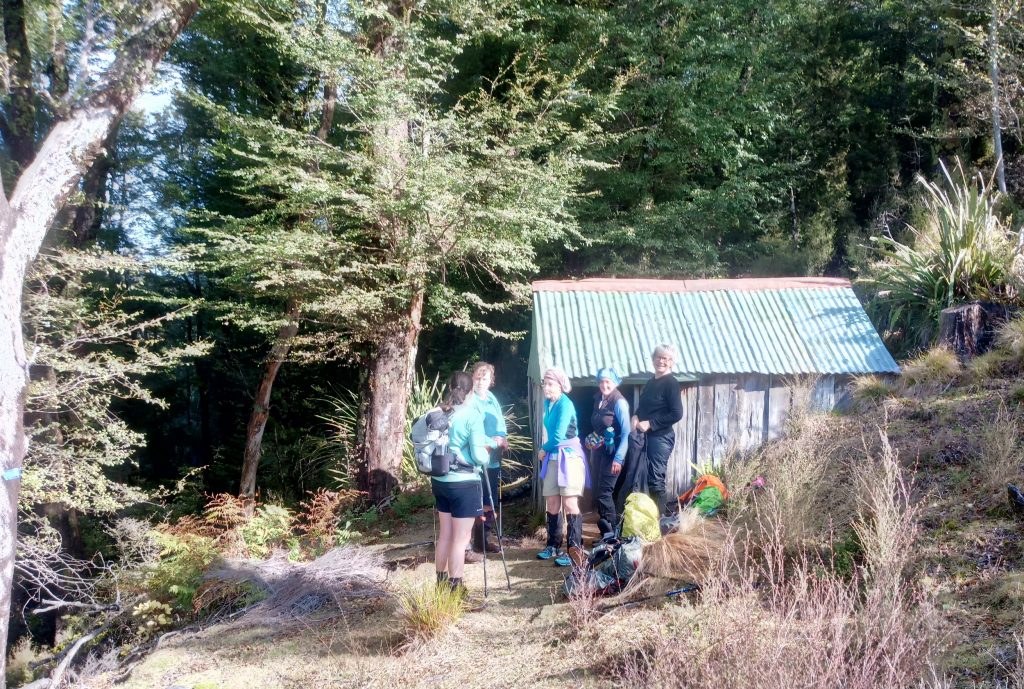 From Kaweka Flats bivvy to Iron Whare, we walked mainly as a group providing the perfect opportunity for discussion and debate. Having not been exposed to this aspect of the club’s activities, I was fascinated to be educated on the relative merits of several outdoor reality TV shows, followed by an intuitive psychological profiling on one of Gold Rush’s male stars. As we approached Iron Whare, the subject turned to food – a lively debate on the nutritional value of ‘what’s in your lunch-box today?’ was followed by ‘show and tell’ during our Iron Whare picnic, where Bruce’s jar of peanut butter took centre stage.

The newly renovated Iron Whare and associated powder room, with its more than adequate ventilation and tranquil forest views, certainly proved worthy of our hiking efforts and lessened the burden of basking in the winter sun. 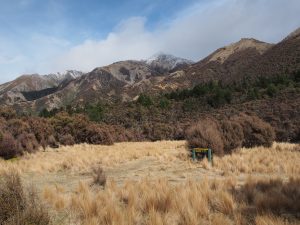 Dominie Biv is on the far ridge, taken from Kaweka Flats Biv

With the cloud lifted, the return trip provided wonderful views of the Kaweka ranges, including Kaweka J with the Dominie Biv and its loo just visible as two tiny orange dots. Discussion turned to the club’s annual October tramp up Kaweka J, with Alison reassuring those of us looking doubtful that although it looked a punishing climb, once you reached the Dominie the hard bit was over and that of course we could do it.

General agreement on reaching the Kaweka Saddle car park around 3pm was that the day had turned out to be rather special despite the hardships we had endured. Bruce deserved extra praise as this was his first tramp since isolating with covid and he had been surprised how tired and devoid of energy he had felt. I was just pleased to discover that 30 times up and down my steps daily was working and that I had no ‘mock turtle’ events as my Whirinaki rodent rescuer (Ratus Timitus) had been nowhere to be seen!

Aranga Hut On Saturday 14 January the tramp was changed to a loop in the Northern Ruahine Range. … END_OF_DOCUMENT_TOKEN_TO_BE_REPLACED

Aranga Hut On Saturday 14 January the tramp was changed to a loop in the Northern Ruahine Range. … END_OF_DOCUMENT_TOKEN_TO_BE_REPLACED