The van, with only a small group on board, headed north-east on the Wairoa highway on a very calm, overcast morning. After a short discussion, we opted for starting at the bottom of the Waipataki hill, doing the walk in reverse.

Leaving the van parked at the bottom corner of the reserve, we headed up through the beautiful nikau palm groves to the top on Aropaoanui Road. We followed the road towards Aropaoanui to the double gates which lead down The Old Coach Road. The track down through pine forest was muddy with large puddles to negotiate, then it opens out and you look over the small gully to the reserve we had just come through. The whole area was looking lush and green after so much recent rain. The trees had lots of lichen hanging from their branches, like beautiful green lace. 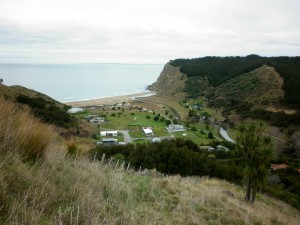 We arrived back where we had started in time for morning tea and then headed towards the beach, taking a detour through the small reserve which runs beside the road to check out the huge white pine trees and climb up behind the baches to a neat lookout.

The track round the coast is above the high tide mark and kept in very good condition although there was a lot of evidence of recent slips from the cliffs above, making it a little slippery. The sea was very calm and peaceful-looking, with only the occasional swell breaking on the rocks below. Our lunch spot was on a small shingle beach with a weak sun on our backs and only a couple of seagulls for company.

Aropaoanui Beach was deserted, so we made our way up beside the river passing a farmhouse, and out onto the main road by the bridge. Unfortunately it was then all uphill, passing the double gates we had been through before, to the car park on the Aropaoanui Road.

After a quick drink stop, it was back down the reserve to the van. With walking in a sort of figure eight pattern, an easier day turned into a longer one than expected – but enjoyable all the same.

Aranga Hut On Saturday 14 January the tramp was changed to a loop in the Northern Ruahine Range. … END_OF_DOCUMENT_TOKEN_TO_BE_REPLACED

Aranga Hut On Saturday 14 January the tramp was changed to a loop in the Northern Ruahine Range. … END_OF_DOCUMENT_TOKEN_TO_BE_REPLACED