Ted and Paul, our two drivers through Big Hill Station, needed good skills as the road is getting very rutted in areas. The wet winter has not helped, but at least we did not have snow. “Rock and roll”, said Colleen. I’m glad I wasn’t driving.

On arriving at Ruahine Hut, another party of two men and young sons were already about. We decided to attempt the circuit heading to Koau Stream on the Shutes Hut track, on to a little-used track down to the Ngaruroro, and then back up onto a ridge to join an old vehicle track. The walk is through kanuka scrub and young beech trees, until you reach the drop-off down to a stream. Then it becomes bushy with many large astelias. The track seemed in good order and was well marked. I understand it was cut around eight years ago. Up the other side, snowfall in only a few places required negotiation, as did some kanuka trees across the track, which was also slipping downhill in some areas. Back up onto the top and across open scrub again, and then open tussock areas. A little undulation and then back onto a ridge and a gentle descent. A lookout point through the kanuka gave a view of a huge slip on the western side of the ridge. 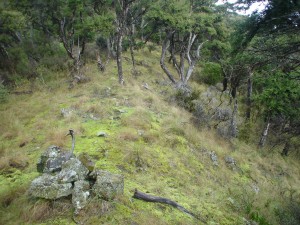 We missed the turn-off, (although Simon saw it but didn’t say anything). However, we realised within minutes and made our way back up and spotted the cairn with the deer’s antler indicating the turn and drop-off down to Koau Stream. The zigzag down the grassy slope made the going easy. 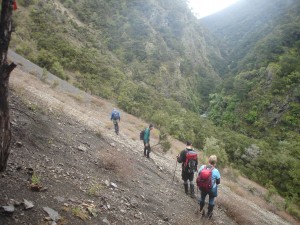 On reaching a slip, Marc spied the orange marker down below, indicating the route to cross Koau Stream. On the other side, we had spotted the fallen down shed/hut, and after crossing the stream, which was flowing clear but fast, we had a brief look. Nothing much left except a roof and the wall studs. On a flat area close by, there was evidence of a campsite. We saw the markers for the Shutes Hut track, but searched for the track to take us along the stream, so that we could make our way to the Ngaruroro. We could not find it and got bluffed out by the stream. We decided to return the way we had walked and have lunch in the sun on the top of the ridge at the antler turn-off.

Lunch in the sun was welcomed by everyone, with lovely views of the Longfellow Range. Ted checked the map, and concluded that if we continued down this ridge we would be better placed to drop into the Ngaruroro. I think that he is right, so we might give this a try sometime.

After lunch, we made our way back up the ridge and back to Ruahine Hut. We had left at around 9am and returned at around 3pm, so in all a good six-hour tramp. Yes, the easy/medium grade was about right. Our thanks to Ray Slavin for the loan of his 4WD vehicle.