Another year, another winter, another solstice; how the time flies. We were back at Triplex Hut for this year’s festivities – a favourite. It was a stunning day, after many days of very cold winds and heavy snow. A wicked frost, clear blue skies and icy roads meant that drivers took it easy on the road south. Only one from Havelock North joined us, taking the number to 16 – slightly down on previous years. 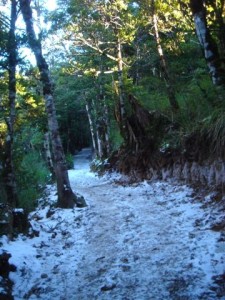 After dropping our shared lunches off at Triplex Hut (to come back to later) the group headed off up the track to Sunrise. The going was easy, with lots of chatter and stops to admire the views out through the bush to the snow-clad tops. After passing the turn-off to the Waipawa Forks Hut, the track tends to the south where the trampled snow had turned to solid ice, making it a little tricky. One or two took a tumble and all thought about the return trip back down.

Sunrise Hut was bathed in sunshine and the first of the group were taking advantage of the verandah, sunning themselves while having their morning tea. One or two had poked their noises over the back to look at the view and commented on the cool breeze. 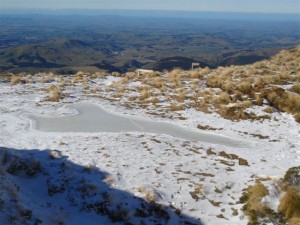 A small party wanted to go up to Armstrong Saddle, so didn’t linger at the hut. Making their way over to the saddle, it was picture postcard stuff and they were looking forward to the views of Ruapehu. Imagine their disappointment when reaching the saddle, only to see thick cloud in the west! We retraced our steps back to the little tarn just below the saddle. It was frozen solid, and time for some ice-skating. The walk back down was easier than expected, the solid ice track not catching anyone out. By the time the last of the party arrived back at Triplex, the fire had been lit and lunch spread out. The only thing was, the trees must have grown since last time. There was no sun and the frost was still lying around the hut. We all squeezed inside, taking turns to sit close to the fire as it got rather hot. As usual, there was a great variety of food and we were hard-pressed to eat it all. It was a little quiet; perhaps the “ talkers” weren’t out today!

We tidied up and trooped back out to the car park. I do believe the next frost was already starting, as it was crisp and cold. Home early after another pleasant day, another Solstice over, and everyone looking forward to Spring, which can’t come soon enough.

You can see more pictures of this tramp at Murray Goss’s picture gallery:

Mackintosh Hut/Rogue Ridge, Kaweka FP, Saturday 17 September 2022 Banner Photo: The leaning sign at the top of Mackintosh Spur It was a sunny, … END_OF_DOCUMENT_TOKEN_TO_BE_REPLACED

Shine Falls, Local, Wednesday 7 September 2022 Banner Photo: Group selfie and the falls Nine of us set off on a very frosty morning from Park … END_OF_DOCUMENT_TOKEN_TO_BE_REPLACED

A-Frame to Stanfield Hut, Ruahine FP, Saturday 3 September 2022 Banner Photo: At the A-Frame Hut We had a full vanload booked to do this trip. … END_OF_DOCUMENT_TOKEN_TO_BE_REPLACED