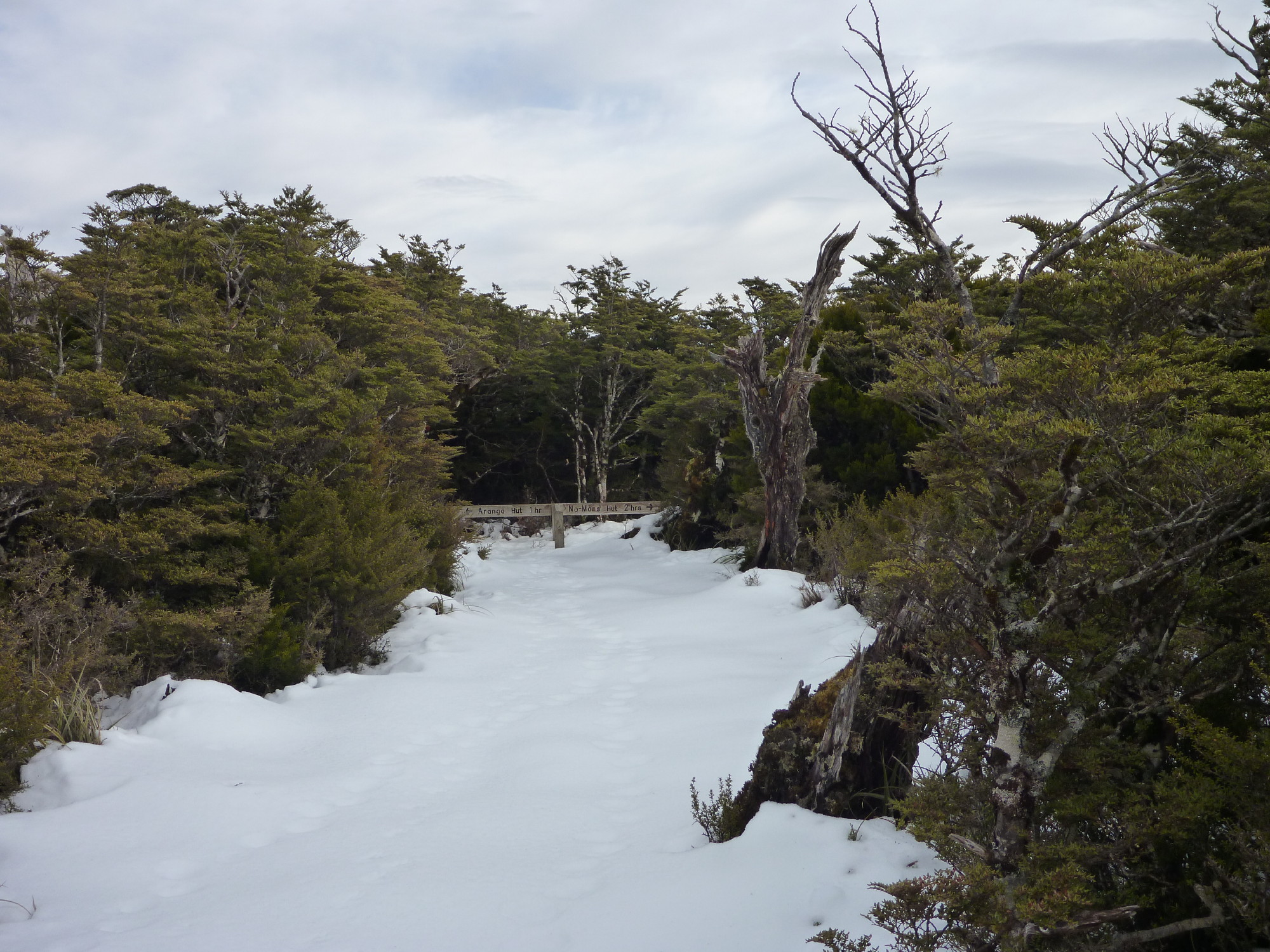 Grey frontal weather and rain was forecast for western areas but it looked pretty good on the eastern side of the Ruahines. So it was a mild and calm morning as 16 eager trampers drove down the Mangleton Valley. As conditions seemed dry underfoot, we were able to easily drive across the paddocks to park closer to the Masters Shelter. Would we do the full trip or just the smaller trip up to the tops and along to Parks Peak Hut? Ted and Paul drove the van and Marc’s car to the Sentry Box end and did the latter, while the rest headed up Golden Crown, hoping to not encounter too much wind or other obstacles along the tops. 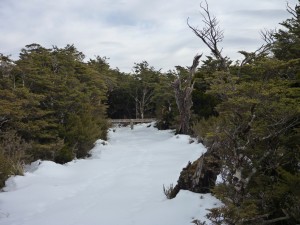 The usual chat and banter of course as we steadily headed on up. There was an unusually lovely bird chorus early on and then it suddenly went quiet again. The track was good, fairly dry and easy going, and we had some good views looking back across the Bay and out across the Whakararas. Layers came off and the breeze was a mere zephyr. We passed some nice patches of good beech forest now and then and later on, the first patches of watery snow that had fallen many days before. This led to some fun with snowballs among some of the party! 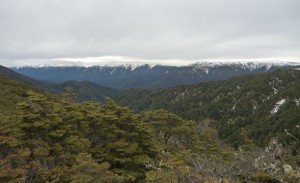 With still no breeze to speak of at the top, we turned left and followed the undulations on the ridgetops heading generally south. Plenty of nice snow now, but not too deep or a hindrance to walking. A few gaps had us gaping out to a very snowy Ruapehu and admiring the main Ruahine Range further westwards. The turn-off to Aranga was passed and so as the noon day bell was about to ring, we looked around for the ideal place to have lunch. This involved much opinion about no wind, views, seats and so on and so it was a while later before the perfect combination was found. 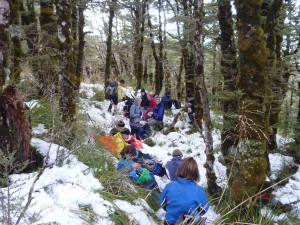 As always in snowy conditions, it does really cool off when you stop and so lunch was a mere 20 minutes before we headed off to Pohutuhaha. Most diverted to the top for a photo stop and to admire the sensational views all around. Only a short section until the signpost along to Parks Peak Hut and down the steep ridge to Sentry Box. Just then Ted and Paul turned up, coming from Parks Peak Hut, and so we all began our way downwards.

Sue Martin was off-colour so some of the party carried her gear to help out. This is a steepish descent at the best of times and a few tumbles ensued, the knees and joints having a good workout. Everyone was safely down to the vehicles by 3pm and we headed away by 3.30pm having enjoyed another excellent day trip. The Chook and Filly received some business, as usual!

Sparrowhawk bivvy, Ruahine Forest Park, Saturday 6 August 2022 Banner Photo: The view east, towards the Wakararas and beyond On a beautiful … END_OF_DOCUMENT_TOKEN_TO_BE_REPLACED

Prologue: The author was on the Whirinaki tramp, reported on this website under the headline 'We observe a mock turtle and the rodent of Upper Te … END_OF_DOCUMENT_TOKEN_TO_BE_REPLACED

Ruahine User Group A meeting was held on Monday 25 July, in the NZDA rooms in Dannevirke.  Julia … END_OF_DOCUMENT_TOKEN_TO_BE_REPLACED

Ruahine User Group A meeting was held on Monday 25 July, in the NZDA rooms in Dannevirke.  Julia … END_OF_DOCUMENT_TOKEN_TO_BE_REPLACED

Ruahine User Group A meeting was held on Monday 25 July, in the NZDA rooms in Dannevirke.  Julia … END_OF_DOCUMENT_TOKEN_TO_BE_REPLACED

Ruahine User Group A meeting was held on Monday 25 July, in the NZDA rooms in Dannevirke.  Julia … END_OF_DOCUMENT_TOKEN_TO_BE_REPLACED