Originally, the trip was listed as a Puketitiri ramble, but after a reconnaissance trip the Tuesday prior, trip leader John Dobbs decided on a longer tramp. A group of 11 headed off in a brand new Mercedes rental van for Te Kowhai Road, past Patoka.

The day was very mild indeed, and the group (minus Geoff and Gordon) was soon sweating profusely during the tough grunt up to the Don Juan trig. I realised that, despite my regular exercise routine of walking and jogging, nothing prepares you for a tough climb… apart from a tough climb! You just have to keep going slowly and drink plenty of water. 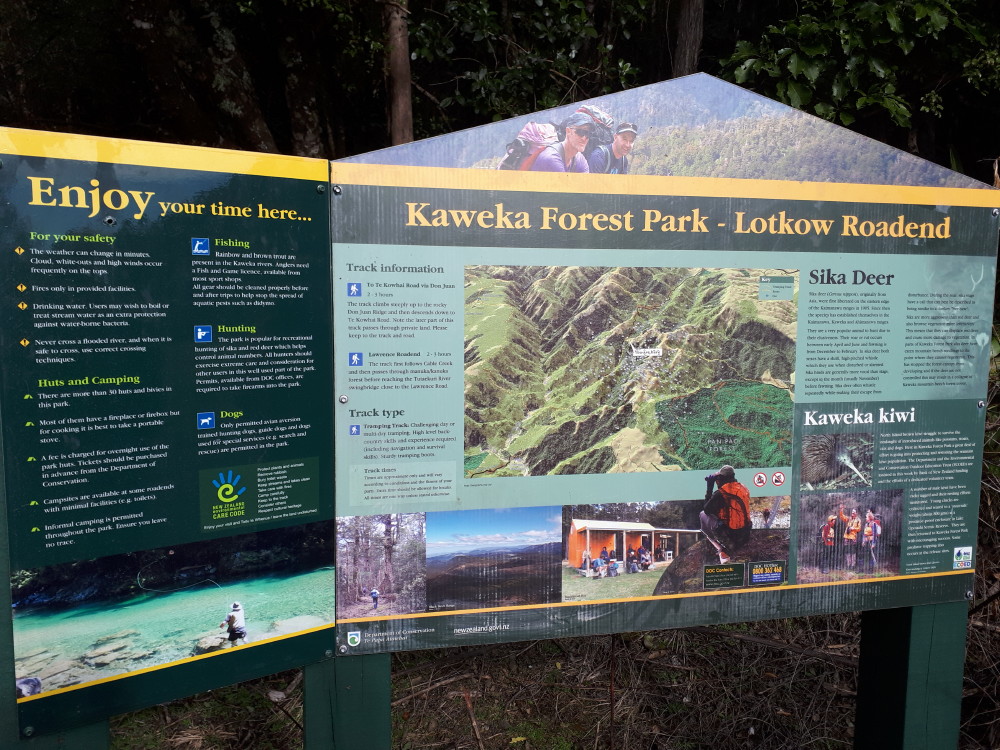 On the way, we spoke to a pig hunter with about five friendly dogs, each with GPS collars; no pig caught, but they did see one.

We had a few stops along the way so everyone could catch up and John D was getting nervous about keeping the group together. Fiona was well ahead on the ascent, and she made sure we knew she was OK with regular large ‘arrows’ scraped into the pine needles. The trig was reached after about two hours of often hard, steep but also undulating climbing. 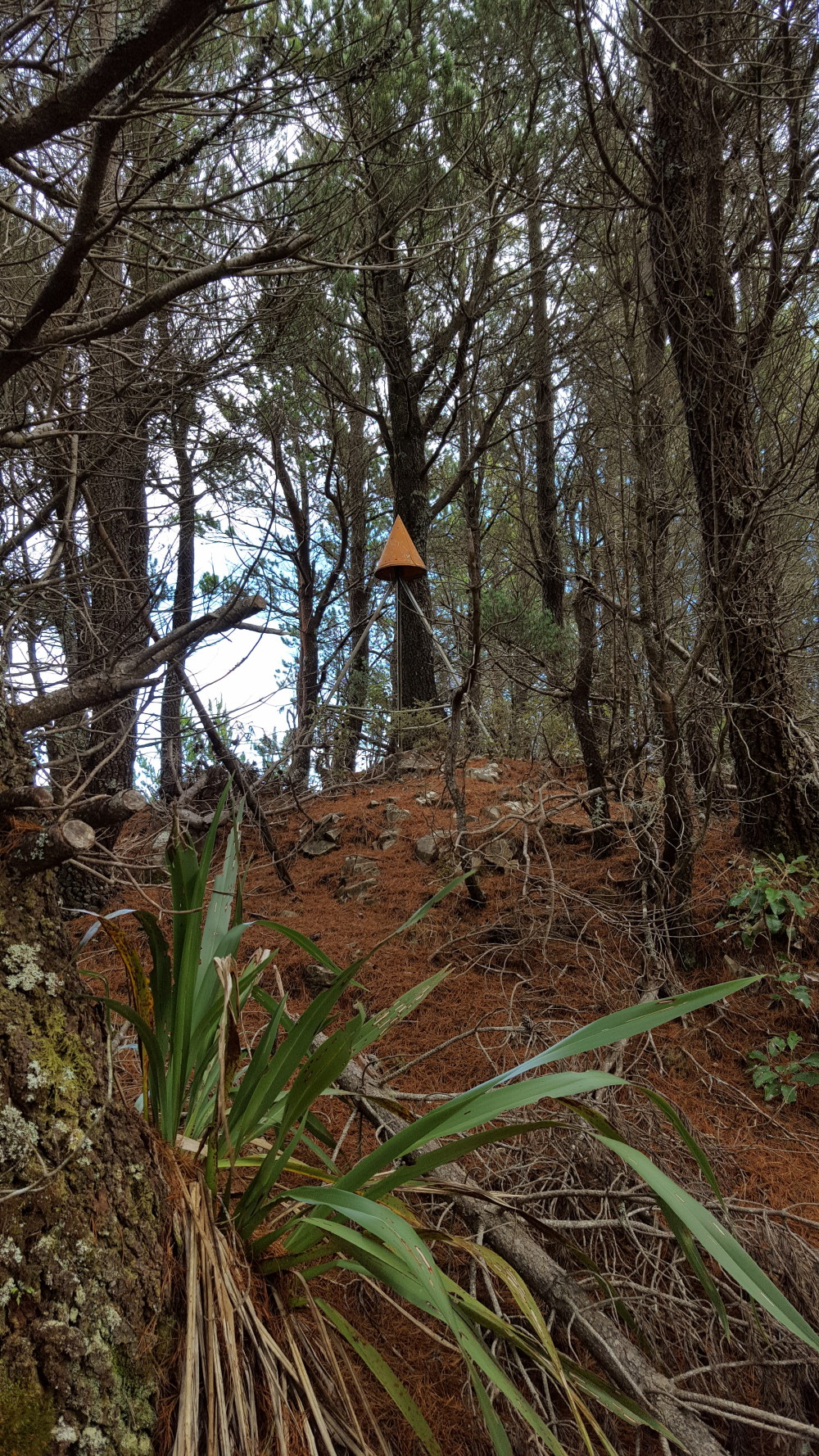 The rocket, surrounded by pinus contorta at Don Juan 943m

John D had said that the trig looked like a rocket so I was expecting something out of the Apollo mission. But sadly it wasn’t quite as impressive – just a trig with a small metal cone on top. Never mind; we had some great views back towards Napier and Kidnappers in the distance and had a morning tea stop nearby.

From then, it was an undulating walk through pine trees until a gradual descent through a wide, easy track among the trees to a car park/camp site area at the end of Lotkow Road. After a few minutes regrouping, we had a 15-minute walk along Lotkow Road to the Black Birch Ridge track.

Once again, a killer climb awaited and after about 45 minutes of climbing, we had a well-earned lunch stop in a nice grassy area on top. After lunch, it was mainly downhill through the contorta with views to the snow-covered Kawekas to Black Birch Bivvy, with its great little outdoor barbecue area. 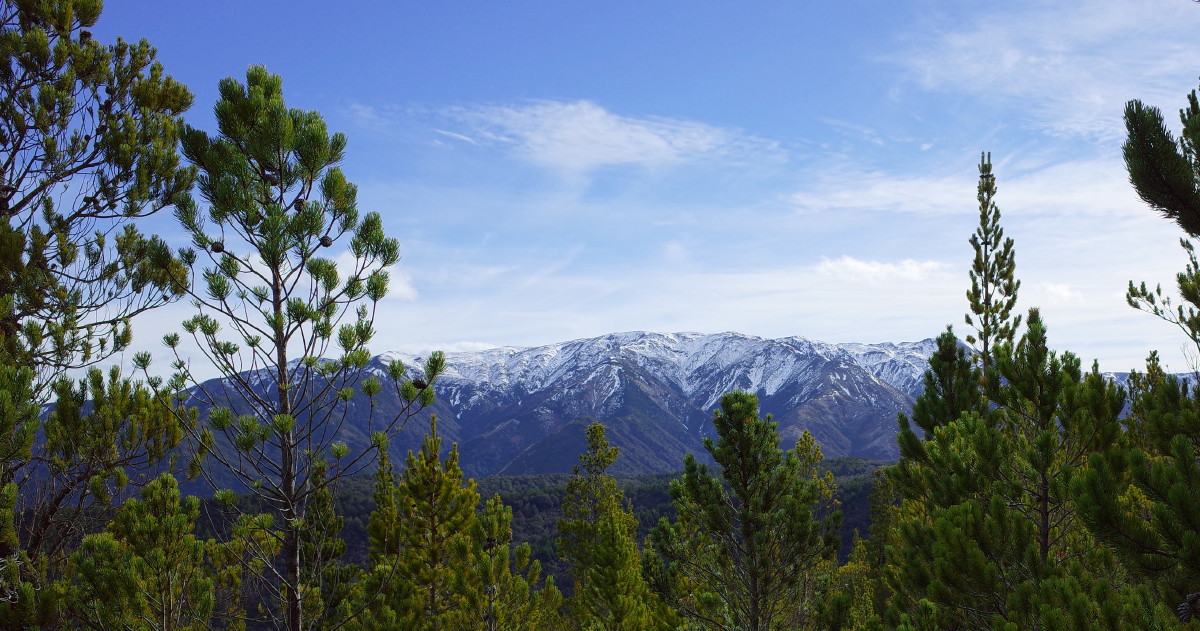 Then it was a fairly short walk through some lovely beech forest back to the van at Little’s Clearing, meeting up with Geoff and Gordon who had brought the van around.

At the start, John Dobbs stated our ETA would be around 3pm, and sure enough we arrived at the van pretty much spot on. It wasn’t an easy ramble, but it turned into a satisfying tramp with beautiful, mild weather, nice views and great company.

Sparrowhawk bivvy, Ruahine Forest Park, Saturday 6 August 2022 Banner Photo: The view east, towards the Wakararas and beyond On a beautiful … END_OF_DOCUMENT_TOKEN_TO_BE_REPLACED

Prologue: The author was on the Whirinaki tramp, reported on this website under the headline 'We observe a mock turtle and the rodent of Upper Te … END_OF_DOCUMENT_TOKEN_TO_BE_REPLACED

Ruahine User Group A meeting was held on Monday 25 July, in the NZDA rooms in Dannevirke.  Julia … END_OF_DOCUMENT_TOKEN_TO_BE_REPLACED

Ruahine User Group A meeting was held on Monday 25 July, in the NZDA rooms in Dannevirke.  Julia … END_OF_DOCUMENT_TOKEN_TO_BE_REPLACED

Ruahine User Group A meeting was held on Monday 25 July, in the NZDA rooms in Dannevirke.  Julia … END_OF_DOCUMENT_TOKEN_TO_BE_REPLACED

Ruahine User Group A meeting was held on Monday 25 July, in the NZDA rooms in Dannevirke.  Julia … END_OF_DOCUMENT_TOKEN_TO_BE_REPLACED