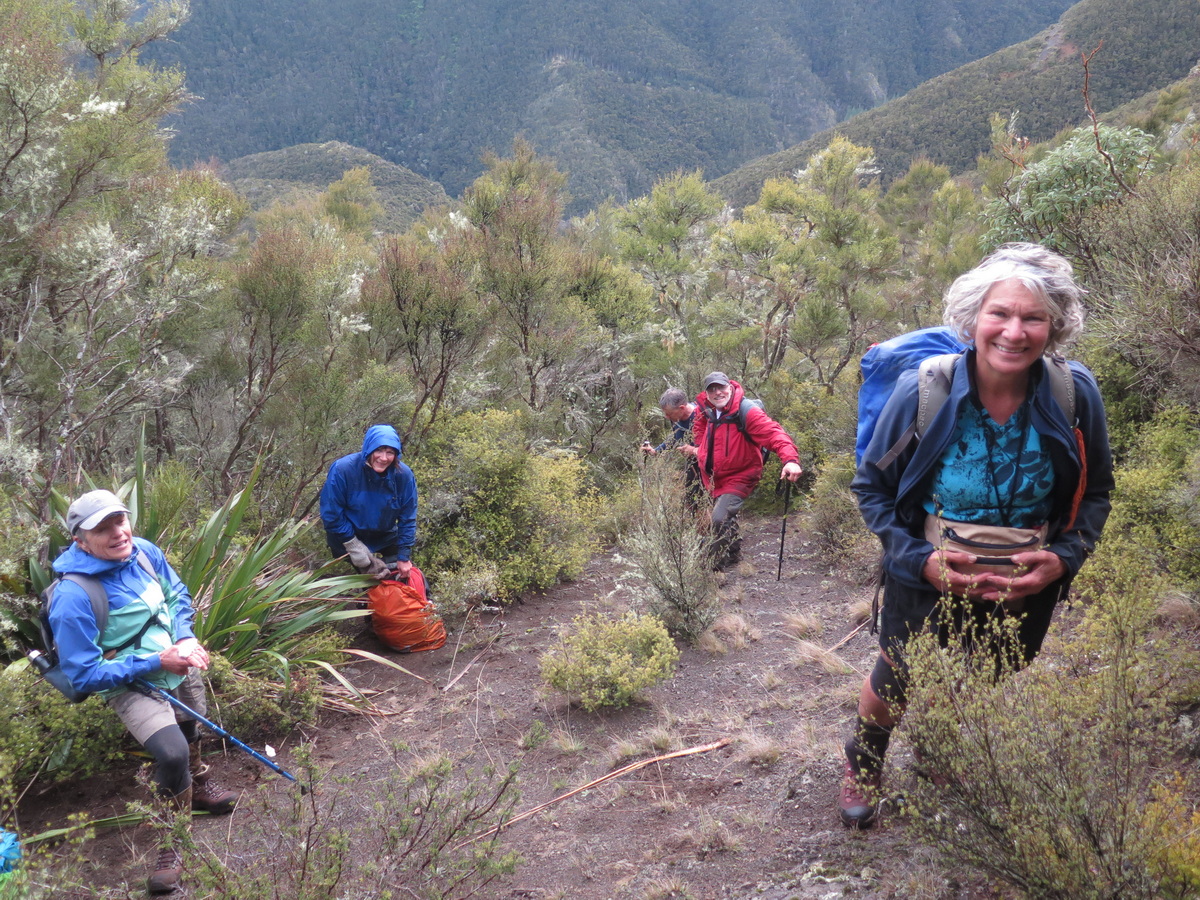 Sparrowhawk Range, Wednesday 7 July 2021
Banner Photo: ‘Yeeha’ and oh the relief: we are clear of the scrub bashing

Fifteen gathered at Park Island with no one mentioning the possibility of inclement weather. And they weren’t put off by rain on the van’s windscreen that featured on and off during the drive. After about two hours weaving along the Gentle Annie, we reached the start point about 9am.
With the van and the car safely parked across the bridge, the happy group togged up with gear suitable for the conditions and headed out. Thirteen planned to go the full hog while Gordon and Vic opted to explore closer surroundings. 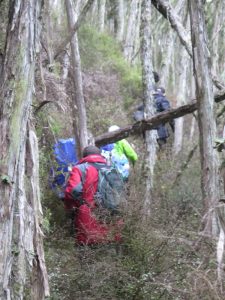 Once over the gate and a false start (we headed down the wrong track), those aiming for the top headed out once again. After about 15 minutes of pushing along a rather overgrown track, the group stopped to check the bearings. Those who had been there in the past were checking to see if we were on the right track – it didn’t feel right. After some deliberating, the decision was made to carry on in the direction we were heading. Our confidence was boosted by information being gleaned from Mr Google.

With a combination of those in the party who had been before, those with search and rescue experience and Mr Google’s info, we headed up the hill in the hope of finding the original track. About two hours later, after bush-bashing and crawling through the undergrowth, we made it to the clearing at the top. Due to scrambling in heavy bush, there was not much chance to admire the surroundings or take photos. Instead, we kept an eagle eye out for those in front of us to prevent anyone getting lost. The colourful packs and the waving of the kanuka tree tops (those in the lead used them to haul themselves up through the bush) were welcome signs that we were not alone. Seeing the waving kanuka reminded some of Chopper flags on their childhood bikes – signalling that someone was below. 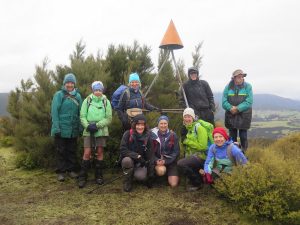 Most of us made it to the trig, 150m from our lunch spot

The happy mood that had filled the van on the way out took a nosedive as our battle with the bush continued. The group’s language also deteriorated, with many expletives being expressed as packs and poles were hooked up in the bush’s tendrils, drink bottles were squeezed out of side pockets and pack covers were peeled off amid the tangle of undergrowth. Individuals dug deep for inner strength to keep going. 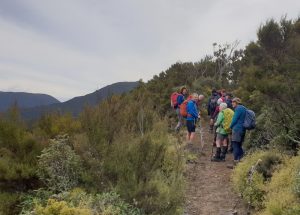 The highway heading up, down and back

The best sound of the day was the “yeeha” from those trail-blazing at the front when they reached the clearing just below the trig. The views (supposed to be spectacular) were hiding under low cloud, making the foreground of scrubby snow line vegetation and kanuka trees the only visual attraction. After a welcome stop for lunch, in the shelter from the breeze, the group headed downhill. This track was not playing the game! It took another false start before we found the real route. Once on our way downhill on the right track, the tramp was a doddle. 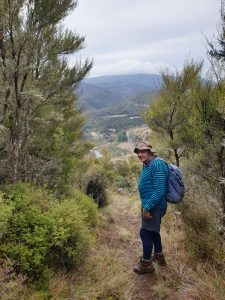 There were few bird sightings and even fewer opportunities to ‘ooo’ and ‘aaa’ at the vistas. Marie’s was the only camera to be heard clicking during the tramp – and only occasionally.

In the van on the return journey, as we picked bush debris from our clothes, the group were thinking of their personal highlights for the day. There were not many highlights relating to the usual tramp, track, bush, birdlife and surroundings. The main features were stopping for lunch and getting back to the van!

There were several nominations for ‘Player of the Day’: Barry and Rosemary – for heading the bush-bashing and scoring the most cuts and bruises; Julia, Alison and Rosemary – as they kept their heads and used their experience and bushcraft so that we novices felt safe; and Ted – for a sterling effort representing the Grey Power team. Mr Google was not a contender!

On reflection, the inclement weather – expected to dominate the day – paled into insignificance with character-building bush-bashing taking the limelight for this tramp up the Sparrowhawk Range.