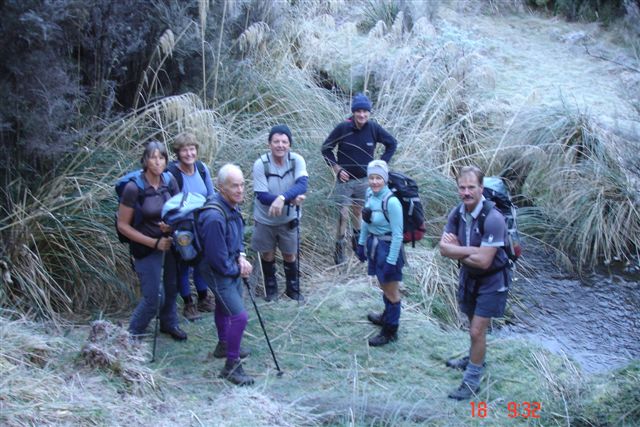 What a great tramp we all had! Who says Saturday tramps are harder than Wednesdays? Ten brave souls set off up the Taihape Road in beautiful sunny but frosty weather to Lawrence Road. After dropping John Marshall off to do “his thing”, the rest of us got out at the car park before the big downhill walk to the swing bridge.

We set off just before 9am at a brisk pace; Vic left us at the bridge for a wander towards McIntosh Hut. We stopped for morning tea on the track in the little bit of sun we could find then carried on up to find much of the track had been demolished in places where the river had flooded and left a lot of debris for us to clamber over. 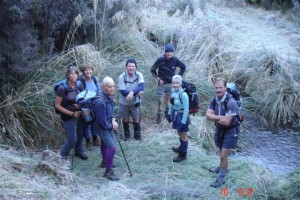 Fallen trees and big slips were everywhere, so it was quite exciting rock-hopping and trying very hard not to get wet feet. We arrived at Lotkow Road at 11am and walked about a kilometre up the road to the turn off up to the ridge we were going to come back down. It wasn’t very well marked but after a bit of discussion and Alison assuring Murray it was the right track, we carried on.

It was overgrown and we got a few branches swiped in our faces if we followed too closely to the person in front of us. We followed the orange tapes tied to the trees and soon decided we should find a sunny spot with a view for lunch.

After lunch, the real excitement started: We got lost. A couple of our party had been this way before but it had been a few years ago and the track was well and truly overgrown, so we bushbashed for about half an hour and then had a committee meeting as to whether we carried on and maybe never get out, or go back the way we came.

After a bit of discussion on the pros and cons of not getting out that night or going back, (which would take longer?) we opted for the latter. So back we trudged and nearly got lost again just as we were about to get down to Lotkow Rd; but Kelvin, our new leader, found an orange marker and we were away again.

It was a very fast, uneventful trip back to the van, arriving at 4.30pm to a relieved Vic and then picking up a very cold-looking John on our way back to Taihape Rd. All in all, an excellent tramp with some very fit people. Even though we never got to where we had planned, it will happen, maybe at a later date!