It was clear, calm and cold at Makahu Rd for the start of our trek from the road to Middle Hill Hut. And there was a pretty good frost underfoot. There were only nine of us in the van because the other usual Saturday crew had gone up to Tuai for Queen’s Birthday weekend.

We left the van at 8.30am and with Colin leading, started climbing the pleasant, easy path. Our proposed target, which was to get to Whetu or within cooee of it, was going to be very much according to the day’s available time. Middle Hill Hut was reached just before 10.30am. We stayed there only briefly while we considered the immediate objective: to climb up Ihaka Spur through the bush and get to at least the top of the bush line. Then we’d evaluate the situation. Overhead conditions remained perfect. 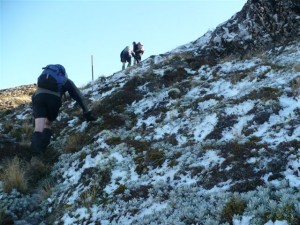 Six of us made up the forward group (Colin, Arthur, John R, Alison, Melinda and Garry). Penny, Sue and Pete remained at the hut for a while longer. The bush through here is beautiful… carpets of moss and superb beech trees; a most rewarding area. The Ballard Hut junction sign was reached at 11am. The track becomes quite steep from here but the pace didn’t noticeably slacken, or so it seemed! There was a cool breeze blowing when we emerged from the bush round about noon. Then a quick lunch lying down in the shelter of the scrub and tussock. With the day remaining amazingly clear and sunny, prospects for an ambitious second half of the outing looked promising. Colin contemplated the situation. Was Whetu (at 1650m) a goer or not? There was some eager anticipation because this was new territory for several of us. Colin was familiar with the area and decided we’d go up.

Melinda was happy to go back down in her own time. The other five of us donned warm clothing and set off upward, exposed to the cold breeze. Pack ice and loose rock made underfoot conditions a little tricky on the slope. We reached the small plateau (which is about a quarter-of-an-hour from and 50 metres lower than Whetu itself) at 1pm. Given the time constraint, Colin decided we should give Whetu Peak a miss. But rather than return via Middle Hill, we’d instead take the loop track back via Makino Hut. A good (and safe) decision, especially as this track would be new to us others.

After about 10 minutes and photos all round, including shots of Ruapehu and Tongariro clearly showing on the horizon, we began the run home. We sidled around the eastern side, scampered down loose scree and typical Kaweka rough rock and, heading generally north-east now, soon left the open. Dropping down all the time through excellent bush, we eventually reached Makino Hut at 3.15pm. Just before then, we had met a couple on their way up to Ballard Hut. With the sun lowering and the day chilling down, the bush took on a different feel: cool and dim. Massive beech trees were prolific.

After a few minutes at the hut, we resumed the trek eastwards over lovely, undulating bush-clad terrain. We continued to be pulled along in Colin’s slipstream. Several of us found a couple of climbs quite cruel at this end of the day. A group of jolly Hastings people were lounging against the side of the Makino bivvy. It was now 4pm. They shared their chocolate and impressed us when they said they read the Club articles in the newspaper. They are the sort of people who should join the Club! Then we picked up the pace. Finally, and still in good light, after eight-and-a-half hours tramping, we plunged down the last bit of track to the van, which had kindly been driven around from Pinks to meet us. All-in-all, a hugely satisfying day. Whetu? Well, not quite. But more than compensated for! String-on-the-map technology indicates we covered about 24 km.

And from Penny, reporter Sue, and Peter:

After morning tea at Middle hut in the warm sunshine, we decided to head behind the hut up towards Whetu just out of the bush line for lunch. The bush was stunning, with the sun casting rippling light effects on the leaves and moss. We climbed for 90 minutes and believed the end of the bush line was around the next bend, but not so. At times, we could hear voices that didn’t seem too far away, but we decided to lunch in a sunny spot and go no further. It was here that Melinda bounded down the hill and got a fright as she stumbled upon us. I had marked the ground with arrows further up the track. Melinda said we were minutes away from the bush line. Bugger!

Following the track back to the hut proved easy, so it wasn’t necessary to stop at the hut again. However, Melinda met her friend from Wellington, so it was a good catch-up and time to put on more layers, as the sun was getting low. Off we went at a cracking pace. Pete’s CPR was accurately set to identify the spot where we had placed his extra gear on the way up. He retrieved that and it was mainly down hill all the way. We met many trampers making the most of a long weekend. Middle Hut was going to be a cosy place that night!

It wasn’t long before Melinda and her mum gradually moved away from us as they chatted. Our pace slackened off and there were lots of stops, as some legs became very tired and sore.

We arrived at the van at 4.30pm, just as the sun was disappearing and the evening chill began. Everyone had a good day – especially Pete, with it being his first big tramp. It’s rumoured that he couldn’t walk at all the next day!