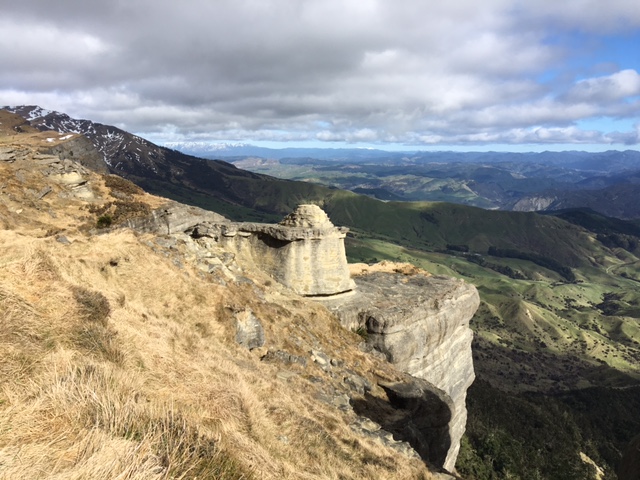 It had been more than three weeks since a winter storm dropped metres of snow over the North Island, from the Kaweka Forest Park, over the central plateau and the Napier-Taupo road, Whirinaki FP and beyond, causing mayhem and massive damage. Remnants of snow could still be seen along the Maungaharuru Range, which was our destination this Wednesday.

It was a beautiful morning and we were keen to get on our way, with a pickup at Westshore and then a little setback. The driver (we must have been talking too much) turned onto SH5 instead of continuing on the Wairoa road. But nobody said a word! Fortunately, I soon realised and turned around, with much heckling from the folks in the car following.

Back on track it was an uneventful trip, turning off at Tutira, past Boundary Stream then stopping off at the DoC house for Ted to run in and ask about track conditions. As expected, the track through the bush to Bell Rock had been obliterated and was closed so we parked at the top of the road and went up the Ridge track instead.

A cool wind soon got us moving, and it wasn’t long before we came to the predator-proof fence enclosing nesting boxes for the returning Cook’s Petrels. Next stop was Bell Rock, an unusual formation that looks “like a bell” overhanging the western side of the Maungaharuru Range. Photos were snapped and morning tea taken, while admiring the fabulous views to the west over the Mohaka River to the Kaweka Range and the mountains of the central plateau.

It was an easy wander north along the range; patches of deep snow still lay all around and we spotted a number of dead sheep which must have been caught out in the deep snowdrifts. 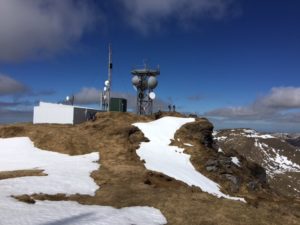 The comms tower in snow

We reached our lunch spot for the day, the communications tower atop Taraponui. At 1308m the highest point of the range, 360 degree views make it a marvellous place to study and pick out landmarks and just soak up the atmosphere. Interestingly, the trig had succumbed to the elements and lay toppled over, its wooden legs looking like they had been sawn off. 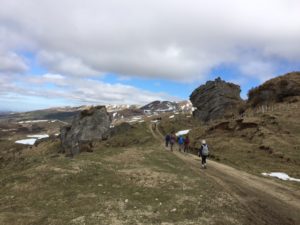 Heading towards the comms tower

After a leisurely lunch and more photos, reluctantly we left and made our way back, stopping at Bell Rock to regroup for a final lingering look to the west, then down the ridge track and back to the van where the other members of our group who had not come all the way waited. They had been to investigate the bush track but did not get much more than a few metres into the bush before coming across massive damage, making the track impassable.

A most enjoyable day out – especially for those who had not been to Taraponui before.

Aranga Hut On Saturday 14 January the tramp was changed to a loop in the Northern Ruahine Range. … END_OF_DOCUMENT_TOKEN_TO_BE_REPLACED

Aranga Hut On Saturday 14 January the tramp was changed to a loop in the Northern Ruahine Range. … END_OF_DOCUMENT_TOKEN_TO_BE_REPLACED