Twelve potential Santas set off from Putara Road end on a cool showery Tararua morning, laden with Christmas goodies. A well-cut track followed the upper Mangatainoka River before climbing to merge with a low ridge leading gently down to the hut located on a benched clearing above the Ruamahanga River. Two streams had to be crossed but neither proved too difficult, despite the rains.

A modern, spacious hut with a large table and an excellent wood burner gave the arrival party a warm welcome and it wasn’t long before the table was set and the hut decorated with balloons, crepe paper and streamers. Poor Ben and his dog Molly (a party of two from Palmerston North) didn’t know what had hit them as the hut was transformed into this visual symphony. The floral theme this year had brought out the Hawaiian shirts and floral head wear. 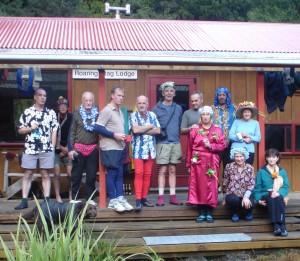 Mother Christmas came and we all made merry with the copious amount of food and drink, including Paul’s Feijoa liquer, which received top tasting marks. We toasted absent fellow trampers, and had a photo shoot on the balcony before night fell.

Thankfully, Ben was made to feel welcome and Molly the dog had plenty to say, so she established an immediate rapport with Murray Goss. They both camped for the night on the balcony, which was a good idea because the temperature inside the Hut was 30 deg-plus, thanks to the over-efficient wood burner and Simon’s alcohol-fuelled story-telling.

During the evening, the weather cleared and gave way to a beautiful star-lit sky, before the Southerly came through next morning. After a bit of a sleep-in, the party departed around 0830 in light rain and casually made its way up and over the ridge and out to the road end, arriving just after 1100. On the way home, we stopped at the popular Cafe 88 in Woodville for snacks and coffee.

It was a thoroughly enjoyable weekend at a magical location – an excellent option for the mid-Winter Christmas trip.