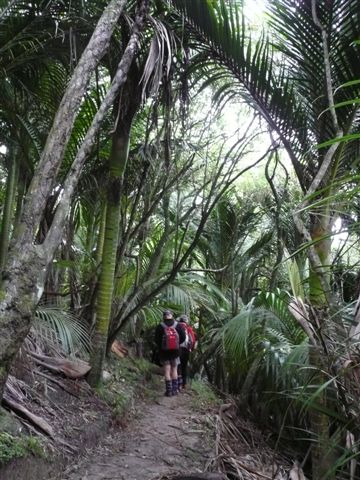 Twenty walkers set off from the car park at the Waipatiki Reserve in grey skies, with a cool wind blowing. But once we entered the sub-tropical-type atmosphere of the Nikau palms (the main delight of the reserve) we soon warmed up. The area is also host to delicate lichens that hang in long, misty-green curtains from the trees; it’s like being in another fairyland.

We came out onto Waipatiki Road and then tramped through the Waipatiki Domain, where we climbed to the top of the look-out; the view down to the beach and back to Napier was great. We had morning tea on the beach and then headed along the track just above the shore, up to Arapaoanui Beach. The sea was calm and weather mild.

There had been some minor slips along the way, due to recent storms. We turned inland, walked across farmland and found a sheltered spot to enjoy lunch; we were entertained by a neighbouring farmer rounding up a mob of sheep in an adjoining paddock and eventually bringing his flock past us. They ran at speed when they saw us! We then headed up Aropaoanui Road and then onto the Bridle Track (the old Napier/Wairoa Road), which was very muddy, due to recent heavy rain.

The views across the valley to a young pine plantation and other greenery were breathtaking, as the sun shone down on them. We spotted wild goats grazing on the hillside.

We rejoined the track up through the Nikau palms, and it was harder going up than coming down! Our group arrived back at the car park at around 2.40 pm, after a very pleasant day out.