Our group of 25 trampers met at the Apley Road / Puketitiri Road corner and departed at about 7.20am for “the Gums” car park.

We arrived at the start of the Makino Ridge Track and the large group split into two; 17 headed up the ridge track and eight drove the vehicles down to the car park and headed upstream. The plan was to meet at Te Puia Lodge and go on to the hot springs together. The day was fine, but overcast and cool. 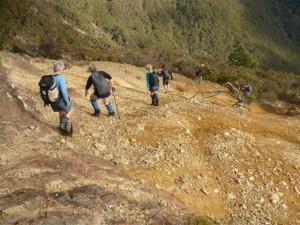 The larger group made steady progress up the Makino Ridge track and one of our drink stops was at the old Makino bivvy. We gathered again at the ‘corner’, and made our way down to the bridge over the Makino Stream, where we met the other group. A small group stayed at Te Puia for their lunch, but the majority went on to the top springs. A new track has been cut and it goes through some nice trees. Several had a swim and we all sat around the pools, eating our lunch.

We didn’t linger too long in the cold atmosphere though, and were soon heading back to the lodge, alongside the Mohaka River, then out to the cars. It was a steady pace back to “The new-look Gums” car park, where a number of large trees have been felled. Fortunately, there are still a few left standing, to identify the car park as we came out!

Unfortunately, punctures slowed the journey home for two vehicles, but it was a great turn-out that included some new faces!

Aranga Hut On Saturday 14 January the tramp was changed to a loop in the Northern Ruahine Range. … END_OF_DOCUMENT_TOKEN_TO_BE_REPLACED

Aranga Hut On Saturday 14 January the tramp was changed to a loop in the Northern Ruahine Range. … END_OF_DOCUMENT_TOKEN_TO_BE_REPLACED