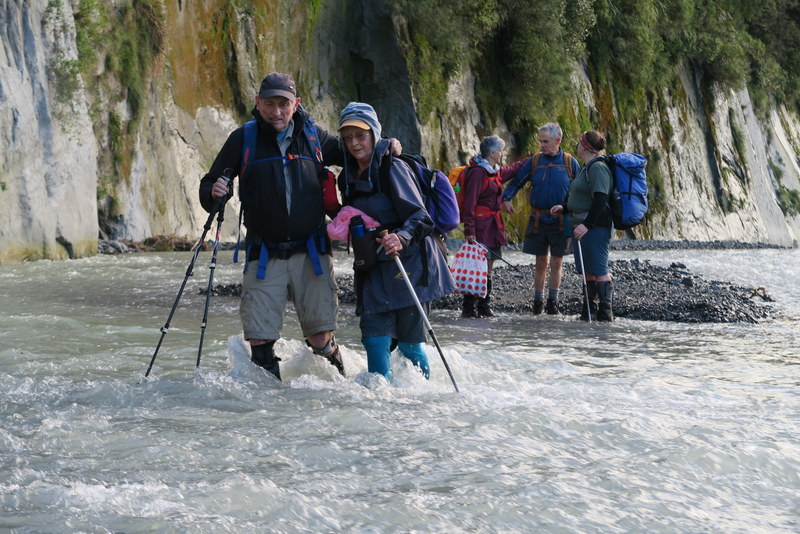 There were 11 in the van, and we started tramping at 08.45. There was a lot of water in the Makaroro River, and there was discussion on how we were going to cross. A couple decided to cross, and the ones with still dry feet watched.

Dot and I decided to try our luck slightly upstream, using a shingle bank about halfway across to regroup. This manoeuvre worked well, and the others followed in twos and threes. I had decided to keep dry tramping boots, so re-shod from sandals to my tramping boots. 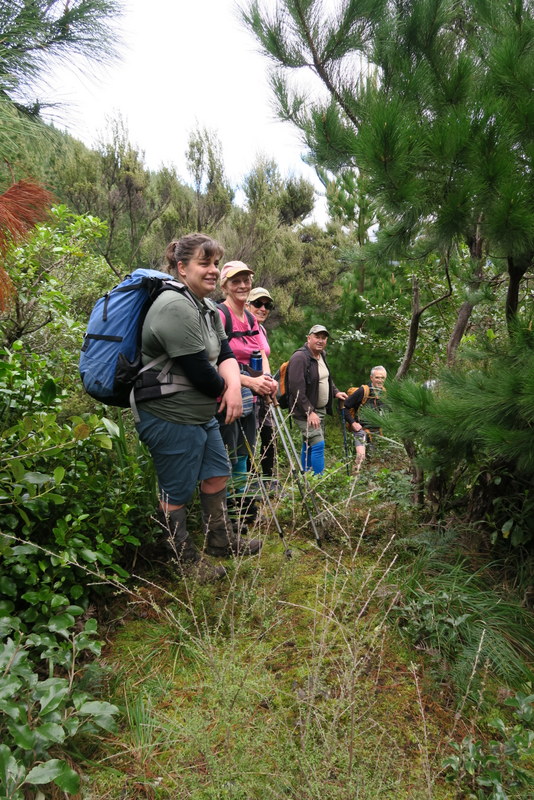 Regrouping on the way uphill

Then it was a small uphill and a long walk along the shingle forestry roads. Some stopped to admire a small, very clear pond, and here we had morning tea. We kept on along the shingle road until we reached Leatherwood Road and turned right. After a few minutes, we finally saw a DoC sign, with Poutaki Hut access. The track initially was steep downhill, to a little stream. Then it was steeply uphill, with very little track signage. The terrain became rocky, and I struggled to find suitable footholds in the shale. This stretched for some distance and once or twice the trampers at the front waited for the rest to regroup.

The track continued uphill, sometimes quite steeply over rocky outcrops. There were some good views over the Makaroro River, and the pine pollen sweeping up in places. We carried on, and eventually came across the old trig, and a radio mast. We carried on down to the hut, which stands in a clearing. The sun was out, but it wasn’t giving any warmth, so lunch was eaten inside. We filled in the hut book and noted a photo of the previous hut that had burned down years ago. 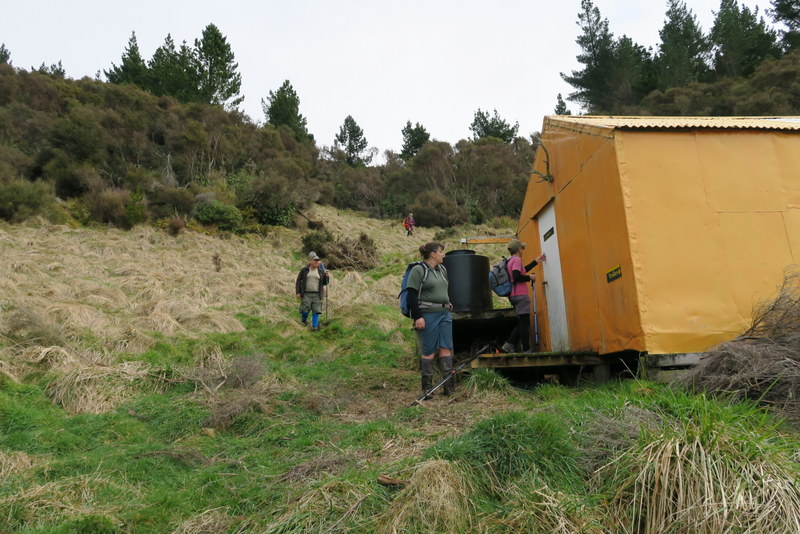 Poutaki Hut in time for lunch

A quick, steep uphill back up to the trig reminded us of our lunch, and we forged on. I fell over, lightly twisting an ankle. Then it was down, down, down over the rocky escarpments and steep shale. I found this downhill somewhat difficult, as I fell over several more times.

A member of the party was delighted about halfway down and a whoop was heard; she had rediscovered her camera, lost earlier. Very lucky! 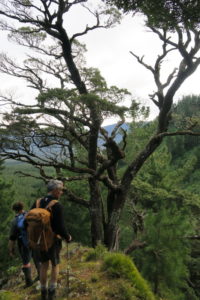 We regrouped at the end of the track to tackle the monotonous, boring forestry roads. There was a quick skit of rain, enough to put our jackets on. Having done this, the rain promptly stopped.

Eventually the river was crossed again, using the same route, and by 5pm most of us were very pleased to be back at the van.

It had been a long but enjoyable day; we were out for more than eight hours, including lunch.

Sparrowhawk bivvy, Ruahine Forest Park, Saturday 6 August 2022 Banner Photo: The view east, towards the Wakararas and beyond On a beautiful … END_OF_DOCUMENT_TOKEN_TO_BE_REPLACED

Prologue: The author was on the Whirinaki tramp, reported on this website under the headline 'We observe a mock turtle and the rodent of Upper Te … END_OF_DOCUMENT_TOKEN_TO_BE_REPLACED

Ruahine User Group A meeting was held on Monday 25 July, in the NZDA rooms in Dannevirke.  Julia … END_OF_DOCUMENT_TOKEN_TO_BE_REPLACED

Ruahine User Group A meeting was held on Monday 25 July, in the NZDA rooms in Dannevirke.  Julia … END_OF_DOCUMENT_TOKEN_TO_BE_REPLACED

Ruahine User Group A meeting was held on Monday 25 July, in the NZDA rooms in Dannevirke.  Julia … END_OF_DOCUMENT_TOKEN_TO_BE_REPLACED

Ruahine User Group A meeting was held on Monday 25 July, in the NZDA rooms in Dannevirke.  Julia … END_OF_DOCUMENT_TOKEN_TO_BE_REPLACED