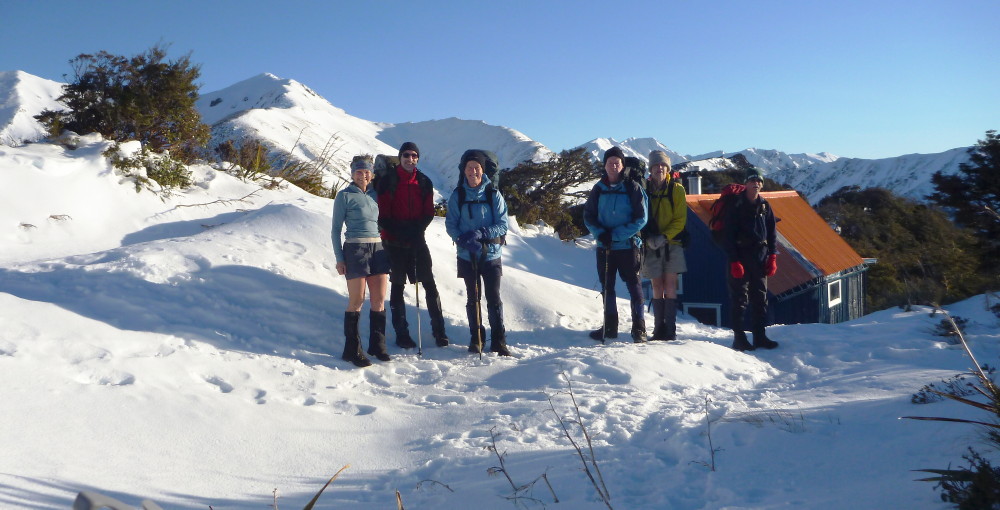 We had the kind permission from the farmer to cross his farmland to take the old ridge track up to the main ridge track. This track is still discernable, but falling away in a few places only. The bush is luscious and dense. Little light penetrates the canopy.

We all reached the bush track junction, the day party and the weekend party walking together. 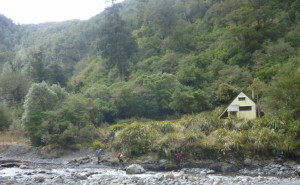 The Tukituki River level was low, as forecast. Paul and Ted, the stalwarts of the club, decided that this was as far as they were going to tramp (they are both 75), and the rest of us walked up river. The water was a tad cold, but not uncomfortable. The day party had their lunch break in Daphne Hut, whilst we crossed the stream and had our break just below the start of the Daphne Spur track. We all took our boots off and wrung out our socks, to help us in the two-hour climb to the tops.

At about two thirds of the way up, snow covered most of the track. From the bushline, although it looked sparse between the snow tussock and low scrub, it was deep. On several occasions, I got into holes that swallowed my whole leg. It is very difficult to get out of these situations, and consumes a lot of energy. Simon has the record, from all accounts -according to his squeals and moans.

Nearing the tops, I looked up to see Phil, who with Marc had decided to come up on Friday. They had an even worse time on this section, as the snow was hard and icy. Marc was on his hands and knees, he told us. And it was very cold on Friday, but on Saturday, I had my shorts on. No wind to chill me down.

Marc had the water on the boil on reaching Howletts, so a hot drink and relax was all that was required. Later, we re-cranked the stove with the dry kanuka that I had carried up. John and Simon had also carried up some dry wood. We were not going to be caught short on wood.

Howletts Hut is the highest in the Ruahine Ranges, and owned by Heretaunga Tramping Club. It has its own special ambience. The views are stupendous, and we were all pleased that we had come up here to experience the snowy conditions, no matter that it was hard work.

The following morning, we had a beautiful blue sky and decided to give away walking the loop around the tops to descend on the other Daphne track. We will leave that for another summer trip. 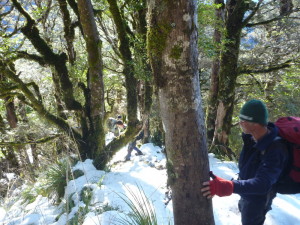 Descending, trying not to fall and amass points

Descending the snow was harder then coming up, and I took a bum fall/slide for a few metres. Not the best way to descend. Still it did not dampen our speed down to the river, taking us only 1hr 20mins. We had a point scoring system for all the falls, 3 for a full backward, 2 for forward, and only 1 if your bum didn’t touch the ground (or something like that). At one point I ended up like a turtle, lying on my pack, unable to get up. Thanks Geoff for the help.

On emerging from the bushline, the views of the Ruahine tops, covered in deep snow, were inspiring. We had just come from the tops a few hours ago.

We had a coffee and cake at the Sawyers Arms in Tikokino, and then we all began to feel our muscles…

What a wonderful weekend winter tramp.