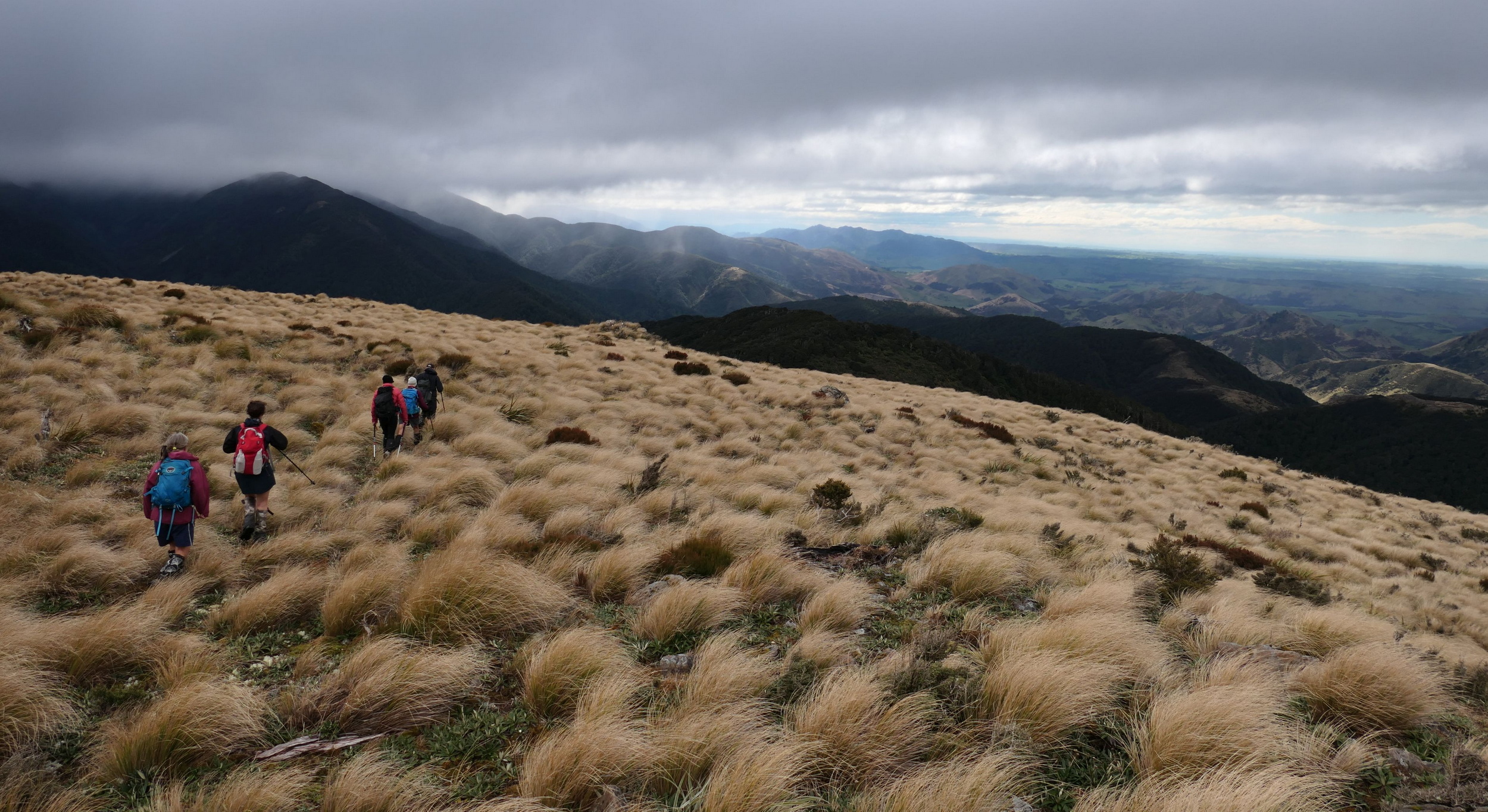 With Sue Martin at the helm, we departed Park Island at 0700 hrs, headed for Maraekakaho where we collected Di and Barry. There was the usual banter in the van on the way; Sue regaled us with her latest photography trip down in the Ashburton Lakes in deep snow. But there was very little noise coming from the lads in the back.

We reached Kashmir Farm around 0830, parked at Moorcock Saddle car park, and were tramping by 0845. After a rather nippy week post-snowfall, it was a beautiful warm day in the valley with only streaks of snow left on the Ruahines. 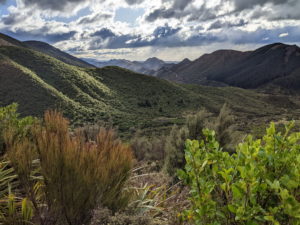 Shortly after heading up the track to Longview, you get the view down the valley of Kashmir Rd

It didn’t take long to realise why the lads had been so quiet. They were saving their energy for the steady 1.5-hr climb to Longview Hut. It was Julian’s first tramp with the club. Barry (aka mountain goat) took the lead and bounced to the top. I (aka mountain gorilla) lumbered behind him and the rest followed. As we made our way over the saddle, we had to dig our toes in to fight the feisty wind gusts which snuck up and attempted to knock us off our feet.

We had all decided to check out the latest renovations to Longview Hut, which was basking in the sun. There was a clear view over the Ruataniwha Plains. Two young hunters had arrived early that morning from Gisborne. As often happens, they weren’t total strangers. One lives on the same road as my mother in Gisborne, and the other only a few minutes up the road! They were thrilled with the clean track and not needing to bush-bash their way up. They were blown away with the views while scoping the country with their binoculars. I asked them if they were surprised to see us arriving and they replied that they had “heard us way before they saw us”. 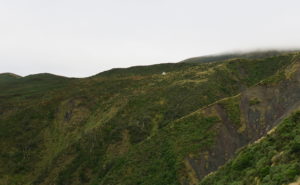 Poor Jenny was intent on having a coffee when our leading cohort decided to push on. She dutifully started packing her coffee away again, only to be greeted by the three others in Cohort 2, who were keen to make the hut their destination. So Sue M, John R and Marie stayed on and kept her company.

The remaining six took a while to get bearings through the tussock to the ridge top. There was a light but brief drizzle.

We deliberately clung to the leeward side of the ridge to avoid the prevailing wind. We somehow managed to find some very deep tracks covered with tall grasses and koromiko. We knew we were in trouble when even Barry’s head disappeared out of sight. Sue Gribble could have done with a ‘chopper guard’ so we could keep tabs on her. Once we got back on to the ridge, the cairns greeted us, and we were at the Daphne Track junction by 11.30. It’s a lovely natural picnic spot, so we found a mossy cushion or supportive tree trunk, and had an early lunch.

From there, it was a reasonably steep, greasy track back to the van. It only takes about 1.25 hrs. We met our only other visiting trampers who were going to try their luck with any hut, knowing that there was apparently also a Wellingtonian group on the circuit.

Our first group had kindly brought the van down the road to meet us. On the way home, the cacophony from the back seats was even more conspicuous by its absence.

Marie was taken to task by Sue M, concerned that she wasn’t taking her role as front seat passenger/driver entertainer seriously.  There was no ‘Tiko’ stop. We had made such good time getting back that we still had a good chunk of Saturday to play with.

Aranga Hut On Saturday 14 January the tramp was changed to a loop in the Northern Ruahine Range. … END_OF_DOCUMENT_TOKEN_TO_BE_REPLACED

Aranga Hut On Saturday 14 January the tramp was changed to a loop in the Northern Ruahine Range. … END_OF_DOCUMENT_TOKEN_TO_BE_REPLACED