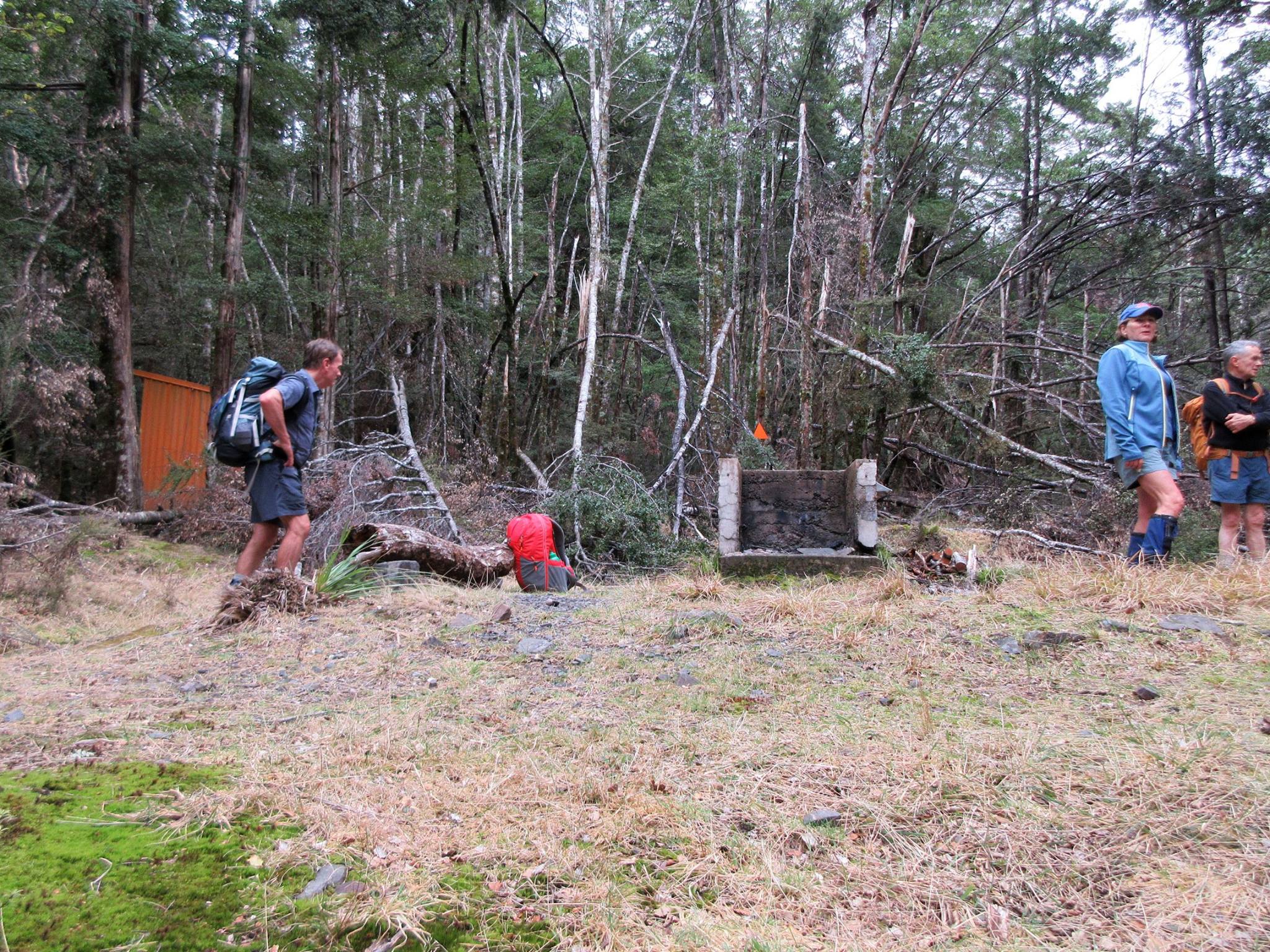 A van and one car with 16 trampers drove to the Lakes car park. Originally we were to park at there and head over to the Mackintosh car park, however after some discussion it was decided that we would do the tramp the other way around.

Sally just managed to rescue her pack and poles which she’d placed out of the van before Jeff and Kelvin drove us to the Mackintosh car park. Kelvin returned to the Lakes with Vic and Peter and they did a return trip to the lake. Vic continued on to the trig while Kelvin did his own thing.

From the Mackintosh car park, Gossy, Murray, Dorothy, Rose F, Rosemary, Barry, Keith, Jeff, John Burrell, John Bennett and Sally dropped down the steep descent to the Tutaekuri River, crossed the bridge and then climbed up the other side. Some of us found the climb a little challenging. 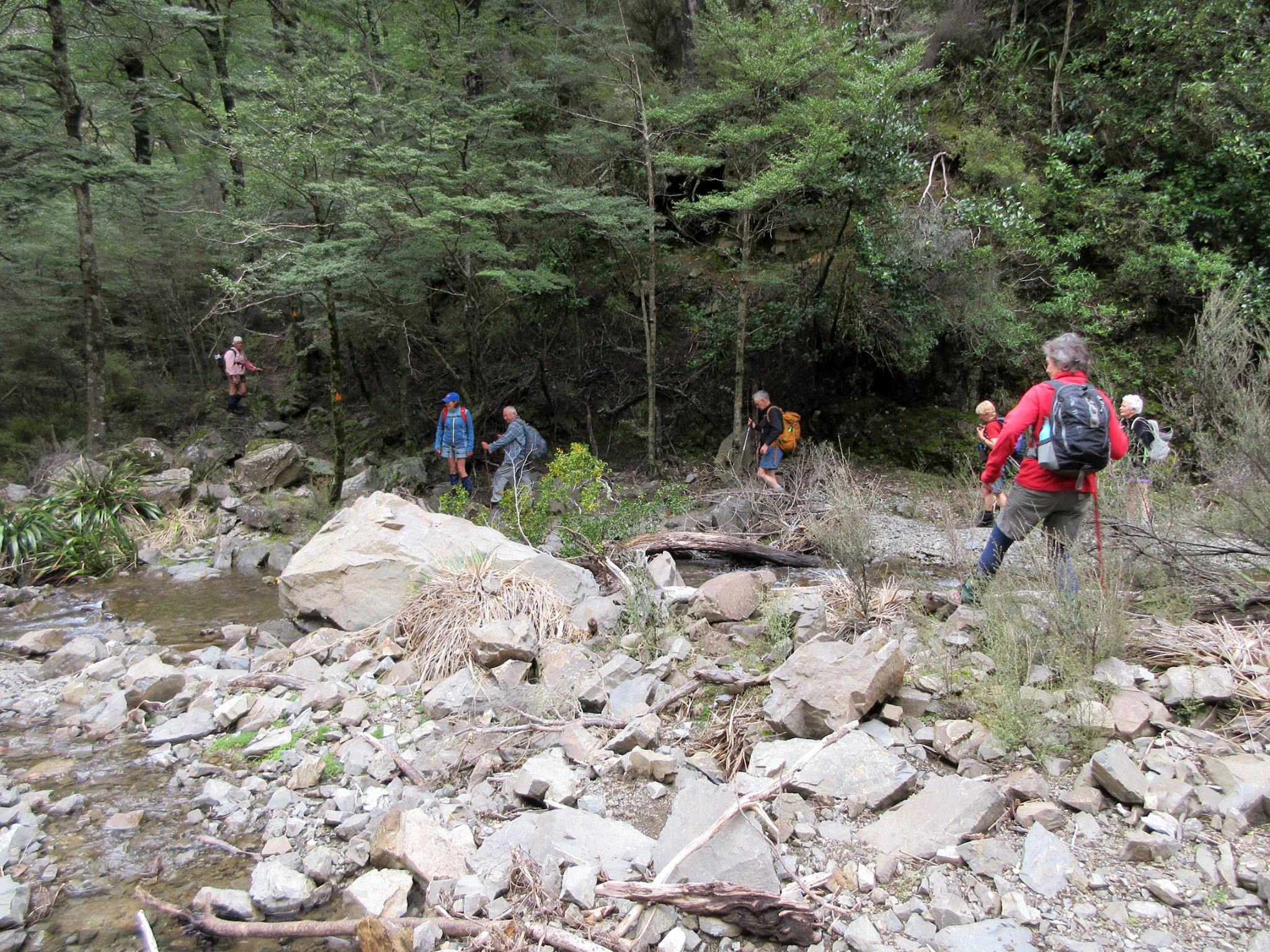 After we reached the top, it became slightly undulating and finally fairly flat to a plateau and the Mackintosh Hut. We had morning tea at the hut and then Murray, Dorothy, Rose F, Rosemary, Barry, John Burrell, John Bennett and Sally headed towards the Lakes car park via the lower track through pretty beech and kanuka forest and over several ridges.

The tramp was slower than it might have been as we had to climb over and around many trees which had been damaged by storms and snow. 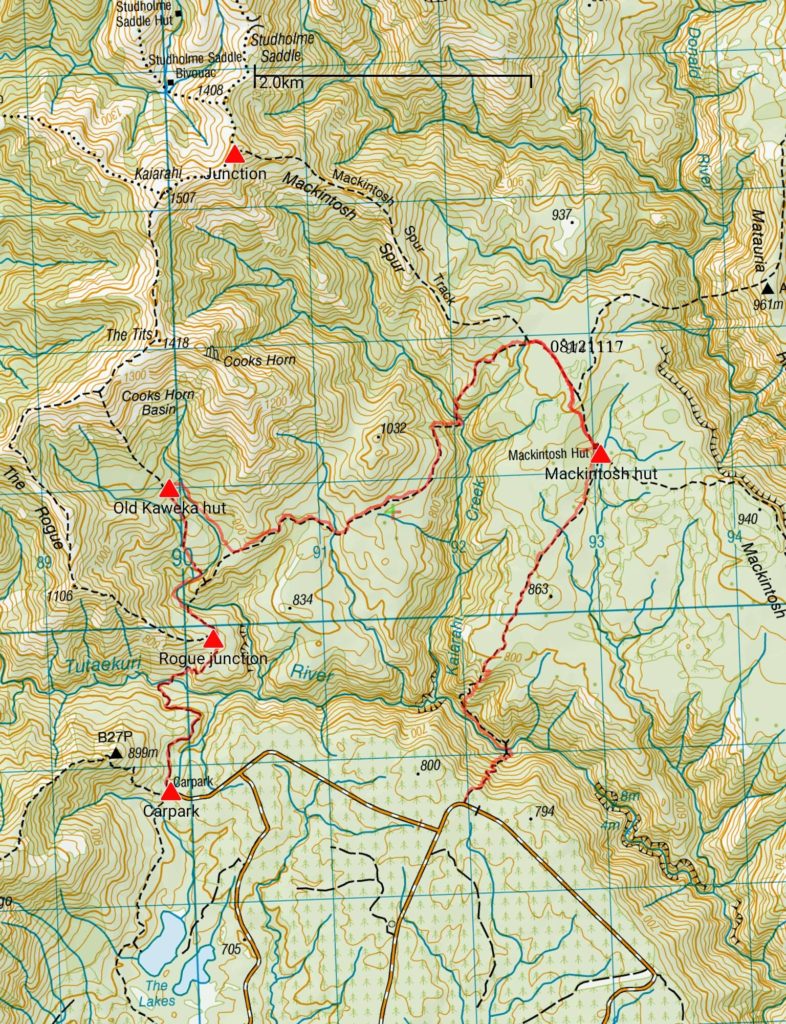 Geoff, Murray and Keith waited at the Mackintosh hut for some time in case the rest of us had to return to the hut because of the damage to the track. They then did the return tramp to the Mackintosh car park.

The forecast had been for showers in the afternoon and wind. We were very lucky with the weather as it turned out to be a fine day, although a little cold at the hut.

All in all a great tramp with a lovely group of people.

Sparrowhawk bivvy, Ruahine Forest Park, Saturday 6 August 2022 Banner Photo: The view east, towards the Wakararas and beyond On a beautiful … END_OF_DOCUMENT_TOKEN_TO_BE_REPLACED

Prologue: The author was on the Whirinaki tramp, reported on this website under the headline 'We observe a mock turtle and the rodent of Upper Te … END_OF_DOCUMENT_TOKEN_TO_BE_REPLACED

Ruahine User Group A meeting was held on Monday 25 July, in the NZDA rooms in Dannevirke.  Julia … END_OF_DOCUMENT_TOKEN_TO_BE_REPLACED

Ruahine User Group A meeting was held on Monday 25 July, in the NZDA rooms in Dannevirke.  Julia … END_OF_DOCUMENT_TOKEN_TO_BE_REPLACED

Ruahine User Group A meeting was held on Monday 25 July, in the NZDA rooms in Dannevirke.  Julia … END_OF_DOCUMENT_TOKEN_TO_BE_REPLACED

Ruahine User Group A meeting was held on Monday 25 July, in the NZDA rooms in Dannevirke.  Julia … END_OF_DOCUMENT_TOKEN_TO_BE_REPLACED